The Hou Yifan Express turned into a jet-propelled aircraft after today’s win over her main contender for the 1st place, the Russian Olga Girya. In a very entertaining and sharp game, the Chinese claimed the point and is now enjoying a two points lead of the second place.

The amazing string of victories of the Russian star, Olga Girya, was disturbed today by the tournament leader, yet she is the only one who technically can still catch up with Hou Yifan, as she is alone with 5.5/9 on the second position.

Still on the third place but now shared with two more players, is Anna Muzychuk, who lost against Alexandra Kosteniuk. The Russian GM joined her on 5/9, the same as the Georgian GM, Nana Dzagnidze, after mercilessly defeating Antoaneta Stefanova right on her birthday.

Only two players are on 50%:  Anna Ushenina and Kateryna Lagno, who both failed to break the defense of Batchimeg Tuvshintugs and Nafisa Muminova, respectively. For the Uzbek player, Khanty Mansiysk will have a special place in the drawers of memory, as it was here she scored her last needed third IM norm, after holding Kateryna Lagno to a draw!

Just half a point behind, with 4/9 are: Nafisa Muminova, Zhao Xue and Antoaneta Stefanova, followed by Tatiana Kosintseva on 3 points and Batchimeg Tuvshintugs with 2, after troubleing Kateryna Lagno by stealing an important half a point. 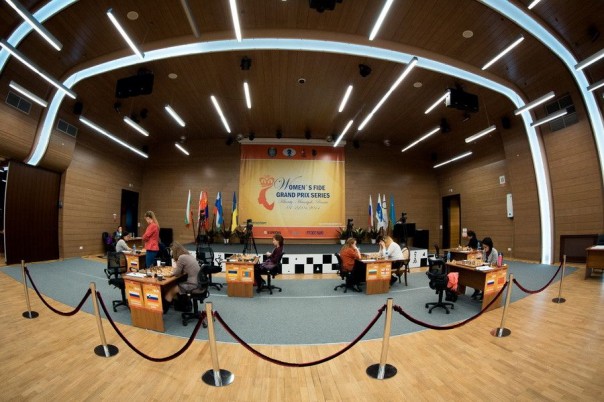 The long awaited direct confrontation between the leader, Hou Yifan, and her closest rival, Olga Girya, has come. Olga seems to be starting with a psychological disadvantage. It is not so much about playing with Black, but rather that a draw would secure her the final grandmaster norm. In case of losing, her rating performance would be just a few points below 2600, meaning that she would miss the norm by a whisker. Will Olga be able to give it all for this battle, leaving half-measures aside?

Nafisa Muminova is the second norm contender – a draw would secure her international master norm. She plays with Black, too, but doesn’t have to live with the pressure of the fight for the first place, so things might be ‘simpler’ for her than for Olga.

Last but not least, Antoaneta Stefanova celebrates her birthday. We can only be curious what kind of rabbit she will pull out of her “opening Magician” hat today… 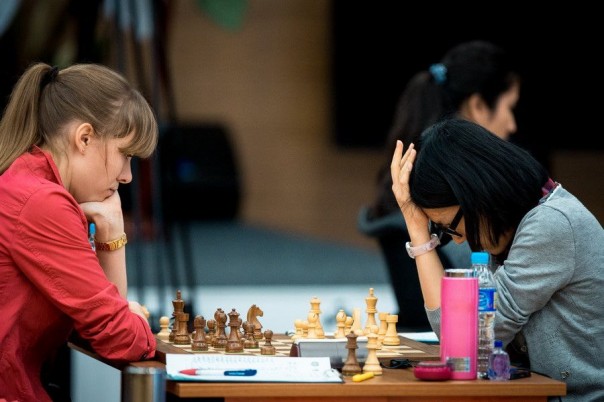 Clearly the most awaited game of round 9!

In a typical Scheveningen Sicilian style, with certain queenside strategic achievements for Black but strong kingside pressure for White,  both players seemed to have been surprised by the opponents choice, since they spent important amounts of time. Things can get very sharp and it is not clear which is the final word of theory in such lines… It can just be very messy; for example after 20…g6 21.Qh3 Black has a choice between 21…Nxf4 22.Ng4 e5 23.Rxf4 and 21…f5. 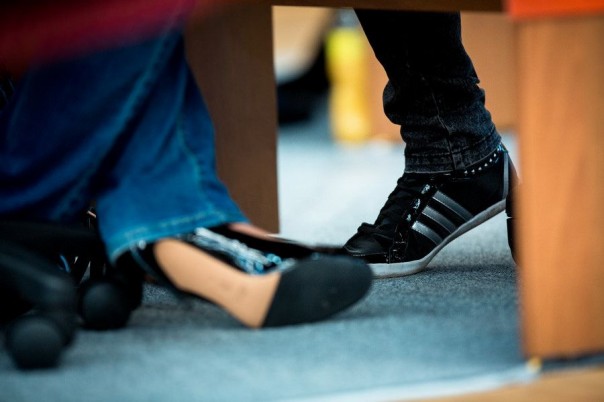 All or nothing in China vs Russia!

During the press conference, Olga told us she had assessed 21…Nxf4 as simply too dangerous to even calculate, which is of course understandable, given White’s scary-looking attack.

After a long thought, the Russian played the passive 21…Bd7 leaving White with free hands to carry out her attack. And obviously, Hou Yifan did just that, happily taking her chance to make the impressive move: 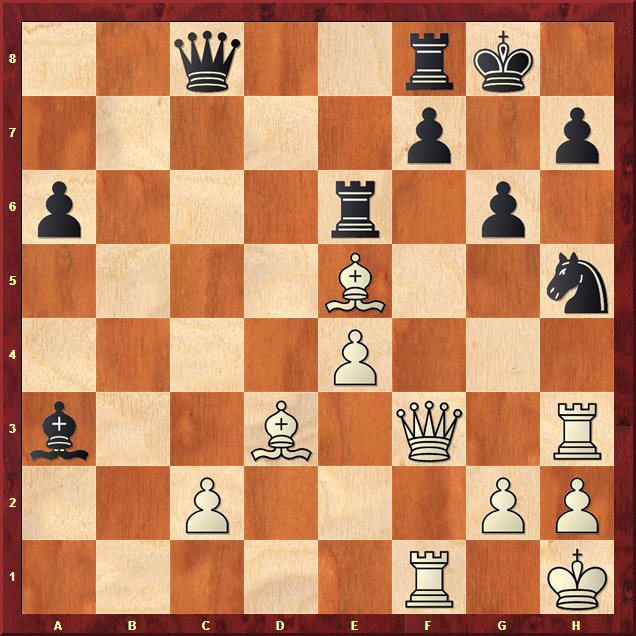 29.Rxh5! gxh5 30.Bf6 Rxf6 31.Qxf6 leaving the enemy king with serious injuries. In spite of the lack of time on the clock, the Chinese played very precise, strangled Black’s position further and won an excellent game, which gives her a lead of two full points! 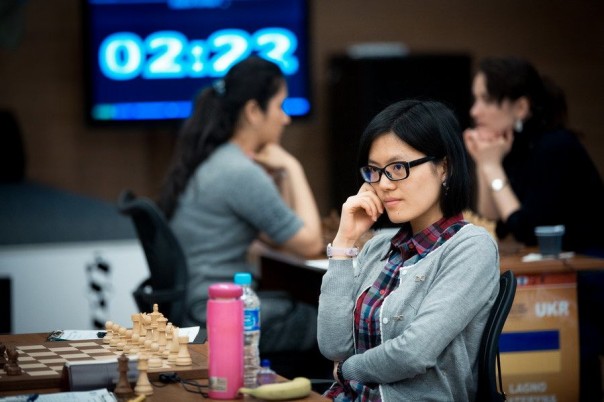 We can almost say that Hou Yifan is the winner of the Khanty Mansiysk FIDE Women GP, although there are two more rounds to go! The only one who can still, theoretically speaking, catch up with her is the same Olga Girya, who, unfortunately, missed her GM norm today…yet, with two rounds left, she is second in the standings and with very good chances to make her norm in an even better scenario: from 11 rounds instead of 9!

Alexandra Kosteniuk combined two different plans in the Catalan opening. 4…Bb4+ 5.Bd2 Be7 is usually intended as an introduction to a hybrid form of the closed system, but Alexandra captured on c4 before castling. With the bishop on d2 and the d4-pawn hanging, White couldn’t retrieve the pawn with Nf3-e5; moreover, Muzychuk didn’t find the best way of organizing her pressure in the center and saw herself without enough compensation for the pawn… 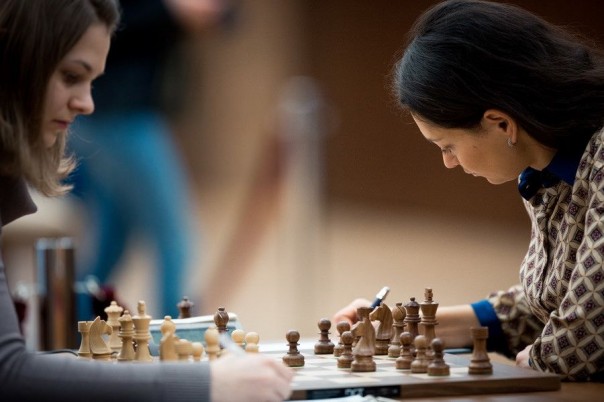 Alexandra clearing her way up to the podium

Up to move 21, it went Alexandra’s way, but then her 21…Re8 gave just the amount of air White needed to breath in and untie himself with the strong, and played by Anna, 22.Qc4 and 23.Nc1, where suddenly Black’s pieces are awkwardly placed; instead, 21…Qb7 would have set up all kinds of tricks on the diagonal; for example if 22.Qc4 (just like in the game) then 22…Ne3 follows! And then again, the time trouble showed its scary head in the worst possible moment: when the position became messy and very complicated. 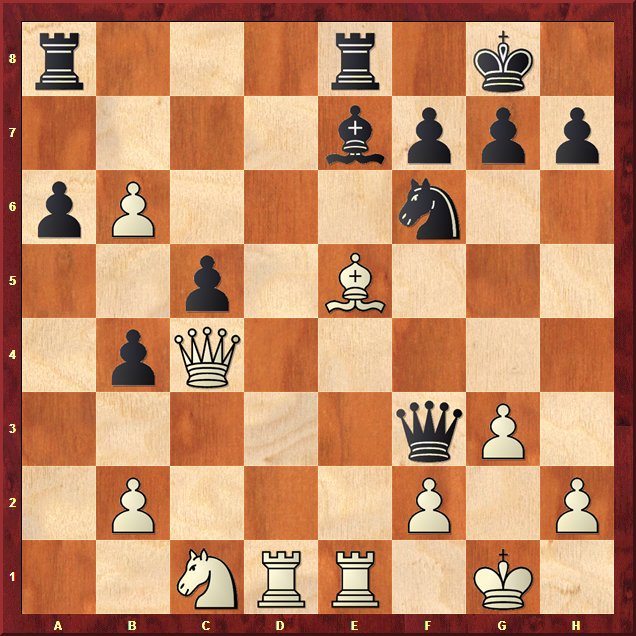 26.Nb3 that Anna played loses by force, as Alexandra proved with 26…Ng4, hitting on f2, the knight on b3 is also suffering, as well as the bishop on e5. Instead, 26.Bc7 or 26.Nd3 would have been better alternatives and, perhaps, White can even play for more.

Having pressed the entire day  and after very powerful moves, Alexandra decided it was about time to prove she is not just the moral winner of the game but also the one to take the point just before move 40.

What started as a shaky tournament for Alexandra, began to take more and more shape of an actually good event, to the injury of her opponent, who suffered two painful losses in a row – free days are not good for Anna…

Starting with a Triangle-system move order, the game soon transposed to a genuine Stonewall Dutch. Although there is no forced theory in this setup, we cannot call Black’s play experimental. It may be that on her birthday Antoaneta decided to play something very classical? 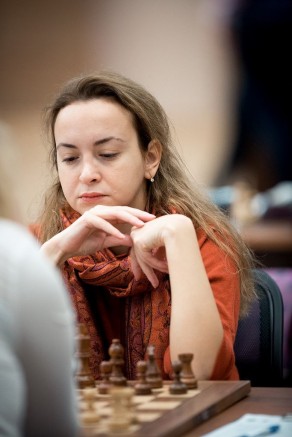 Not a very enjoyable birthday for Antoaneta…

Curiously, both ladies thought an awful while in the opening, around half an hour each for just eight moves.

Black’s 9…b6 might have been premature, forcing Black to answer 10.cxd5 with 10…cxd5 (since 10…exd5 loses a pawn to 11.Qc2). The symmetrical re-capture is known to favour White and, indeed, Nana Dzagnidze managed to develop strong queenside initiative soon. 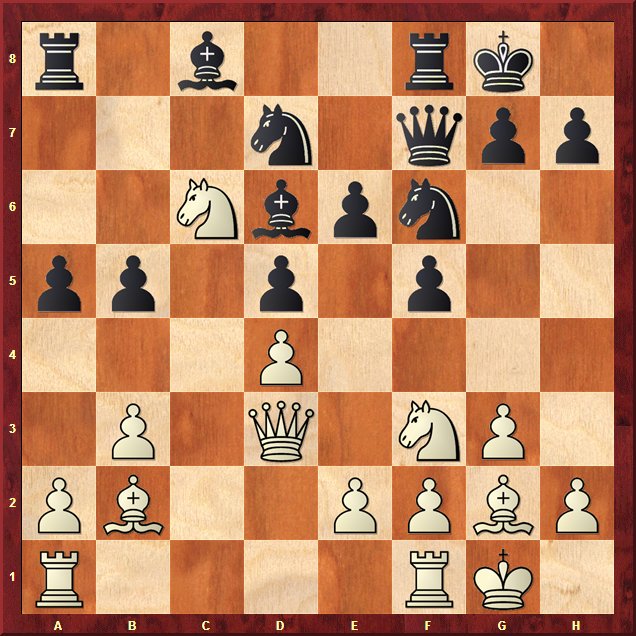 And yet, which should be the right approach to maneuver your way out of these long, strategical battles? The Georgian came up with the very original, but perhaps slow, plan: 15.Bc1, trying to reroute the bishop and exchange it on the stronger colleague from d6. Stronger might have been to increase the pressure with 15.Rfc1, Nfe5 etc. 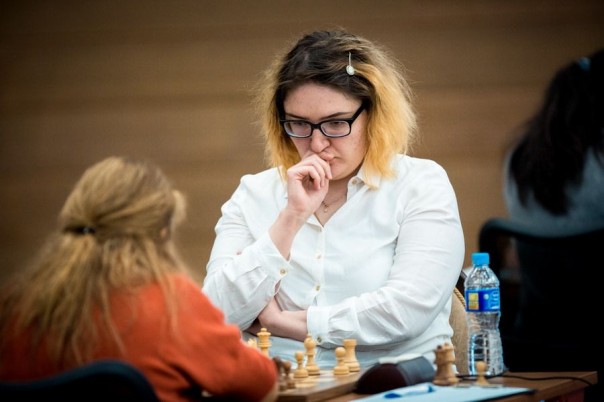 In the end though, the game continuation favoured White, as Antoaneta couldn’t restrain her aggressive style, choosing the double-edged plan with g5, followed by g4, weakening the dark squares. The Georgian didn’t let her chance vanish, played precisely: 24.Bxe4! and 25.Bd2, increasing her advantage. Probably Antoaneta should have gone later on for 25…Bxe2!? 26.Bh6 Bf3! with excellent compensation. With the clock ticking the time away, Black’s dark squares suffered more and more of loneliness and soon Nana asked a very dangerous question with an exchange sacrifice: 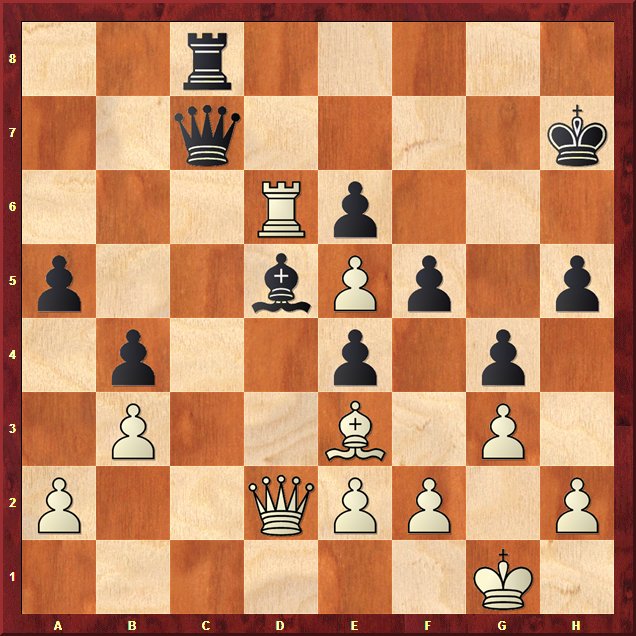 33.Rxd5! Although not a necessary one, as White could have continued with the more quiet 33.Kg2, the game move was even more difficult for Black, from a practical point of view.

Soon Antoaneta couldn’t hold her position together and got one of the most unpleasant ‘presents’ for a chess player’s birthday: a defeat. For the Georgian player though, today’s win is very important, as it propels her all the way up to a shared third place.

Kateryna Lagno perhaps mixed up something in the opening, as she was burning a lot of time on her clock. But Nafisa Muminova’s developing plan with 10…Bf5 may also not be the most flexible. Another option would have been the laborious regrouping …b6, Bb7, Ne6, Q somewhere and c5.

Still, Black should be completely fine after the game continuation, too. And yet, Nafisa’s rook maneuver was certainly creative but a bit too sophisticated, as the rook from a8 reached the d5-square via an ingenious route: a8-e8-e6-g6-g5-d5. This took too much time, enough for Katya to claim the advantage. 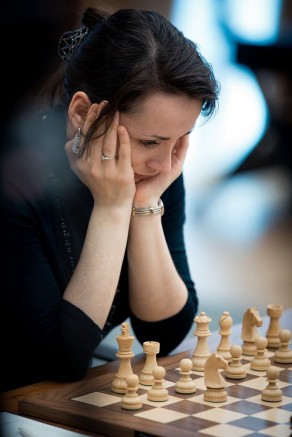 Kateryna handed an important half a point to her opponent 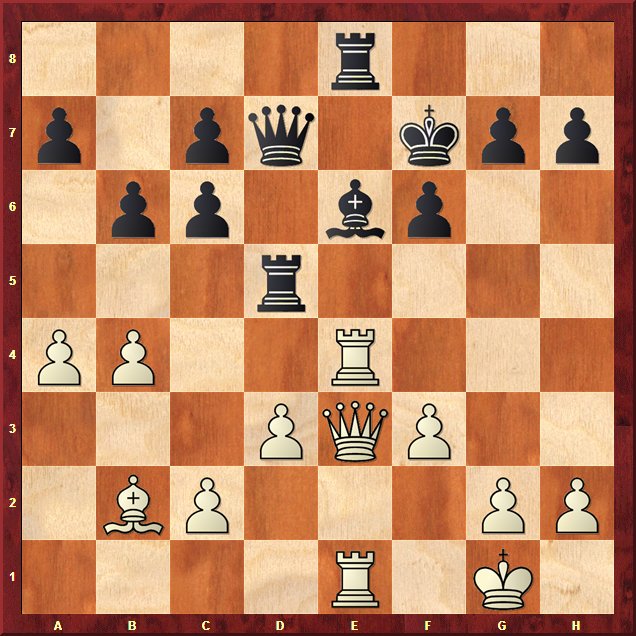 White has tremendous pressure on the e-file and tried to increase it with the natural 26.g4, planning to continue with f4 and f5;  however, a well timed 26…h5 and 28…Rg5, yes, the same restless rook, gave Black enough defensive resources. Future analysis will have to prove how White should have pressed forward…

When the moment came to collect, Katya stumbled under time pressure, White’s advantage disappeared after the unfortunate queens’ exchange and the game eventually liquidated into an opposite colour bishops endgame. More practical problems Lagno could have posed her opponent with 36.Bxc7, but this didn’t happen and soon the game ended in a very good draw for the Uzbek. She is now the proud holder of her third very much wanted IM norm! 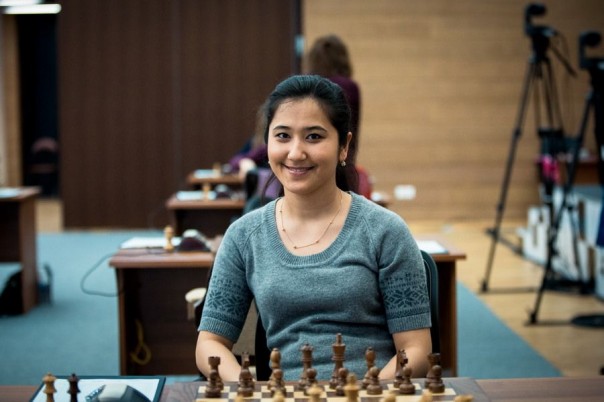 Chasing now the 2400 quota for the IM title!

In the usual style of the 4.d3-Berlin, a slow maneuvering started, where it is not clear if the Chinese’s plan was the best one in the position: she went for the natural but not too effective 11…Be6 and 12…Qc7, where White is slowly taking over. The other plan, perhaps not the B but the A-plan, was with …h6, …Nh7, …Qf6/Ng5.

This time Tatiana didn’t hesitate anymore, outplayed the Chinese in the middlegame, bought herself a dream position with bishop pair and attack… 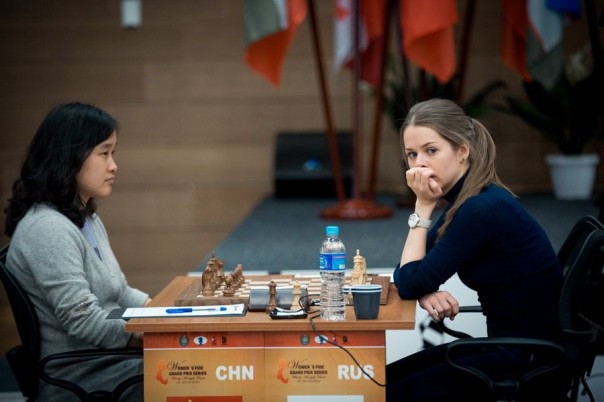 Not a game for the faint-hearted

Zhao Xue though, stubbornly defended a difficult position, coming up with with a very good way to complicate matters: an exchange sacrifice: 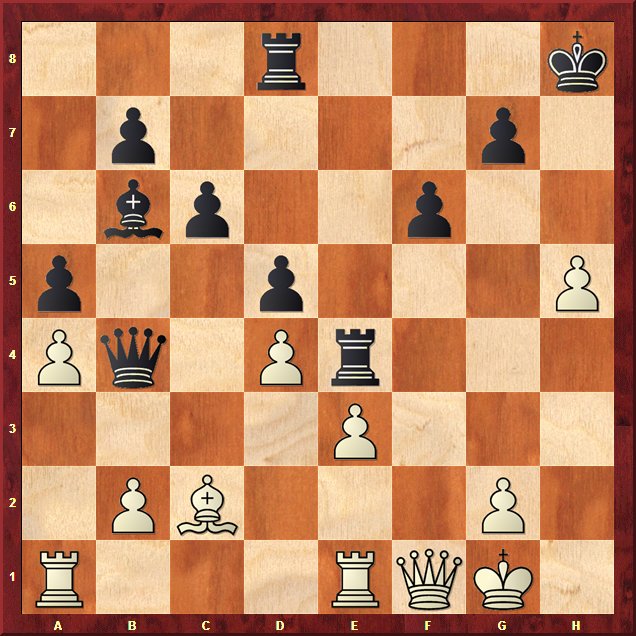 35…Rxd4! 36.Qf5 – offer declined; 36…Re4 – White is invited again to take the rook, which Tatiana couldn’t refuse anymore. Therefore, she converted her advantage into an endgame with an exchange up but there were still some technical difficulties present in the position.

In the end these technical issues proved too much and Zhao Xue escaped with a draw, although in the mutual time trouble by the end of the game, it was even Kosintseva who had to take care a bit, so as to at least secure half a point.

After 75 moves and 5.5 hour of play, the players decided to make peace and a draw was agreed.

Batchimeg didn’t expect the Queen’s Gambit Accepted, as she reacted not in the most precise manner. The concept with 5.Qxd4?! is not in the spirit of the position. (The critical line is 3.Bxc4). Black was already better in the endgame resulted barely out of the opening. 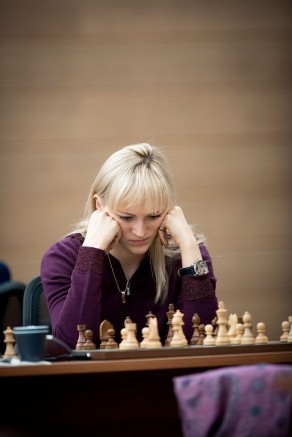 Hunting for a way to win

Although, far from winning, Anna Ushenina enjoyed her comfortable position the entire game but couldn’t find better methods to make the most of it and had to accept a draw right after the time control. Nothing left to play for, when K+N vs K+B is left on the board.

Time for wishing you all Happy Easter, hoping that the players will have some well-deserved good time, but… keeping in mind that there are two more days of hard fight left!