Hou Yifan enteres the rest day on the right foot, remaining a point ahead of the second place after drawing Zhao Xue. But in the 9th round she will still have to face the sensation of today: Olga Girya! The Russian won, for the third time in a row, a crucial game against Anna Muzychuk, forcing her to swap positions 2nd for the 3rd. Olga is now  alone on 5.5/8, plus 21 rating points and very close to score a GM norm.

Just half a point behind the second place and also, still having to face Hou Yifan, is Anna Muzychuk, yet a full point in front of the large number of players on four points.

The players on a balanced 50% are: Kateryna Lagno, Alexandra Kosteniuk, Antoaneta Stefanova, Nana Dzagnidze and Anna Ushenina. Trailing with 3.5 are Nafisa Muminova, who could have had a fabulous tournament but she lost against Nana Dzagnidze, and Zhao Xue, who is the third player in this tournament to force the leader accepting a draw.

The rest day timing is very good for the last two players: Tatiana Kosintseva, with 2.5/8 and Batchimeg Tuvshintugs, with 1.5, who almost defeated Antoaneta Stefanova! 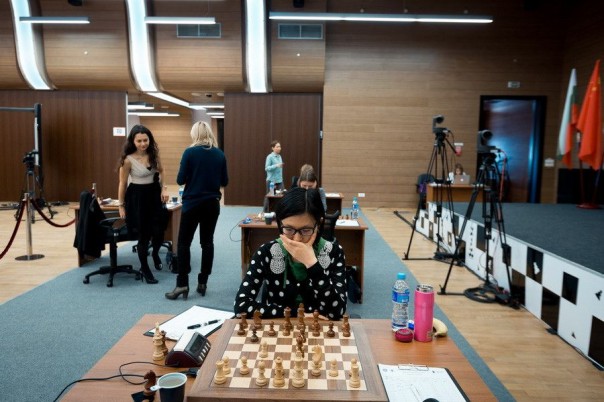 A clear sign of tiredness: many mistakes, missed opportunities and errors all over the place – the players are happy with the upcoming rest day!

As for today’s important 8th round, we had two direct encounters:

Olga Girya – Anna Muzychuk is more than just an open fight for the second place. The winner would get the moral right and some objective premises for catching the Express, Hou Yifan.

The Russian seemed to start with a double psychological advantage. Apart from having the white pieces for the second time in a row, she had an excellent moral condition after yesterday’s win.

Despite her comfortable lead, the World champion was not absolved from a direct encounter, either. Zhao Xue comes after two painful losses, but surely she was going to put all her ambition in the Chinese match!

These were the initial circumstances of the today’s screenplay… Let’s see what happened on the stage! 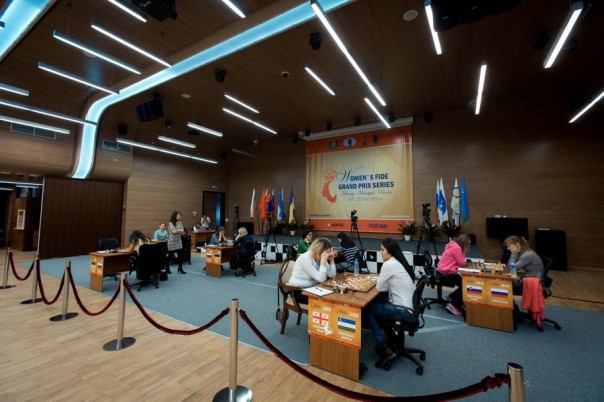 R8: the players are getting tired as many mistakes occurred today

The Russian player continues to amaze with her home preparation, as she played the Moscow opening in a very correct and precise manner, getting soon a nice and stable advantage. Perhaps she was inspired by the thought she could no way disappoint her Muscovite supporters:) 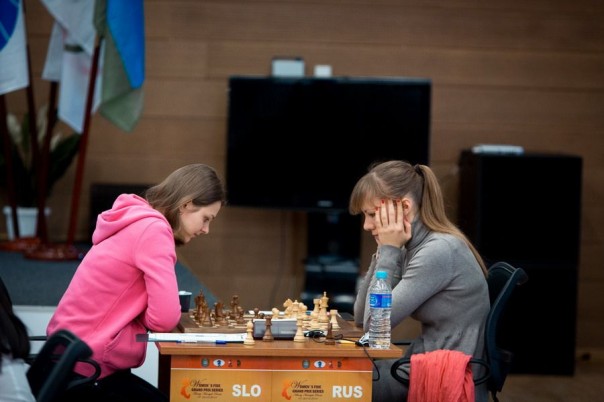 The crucial game of R8 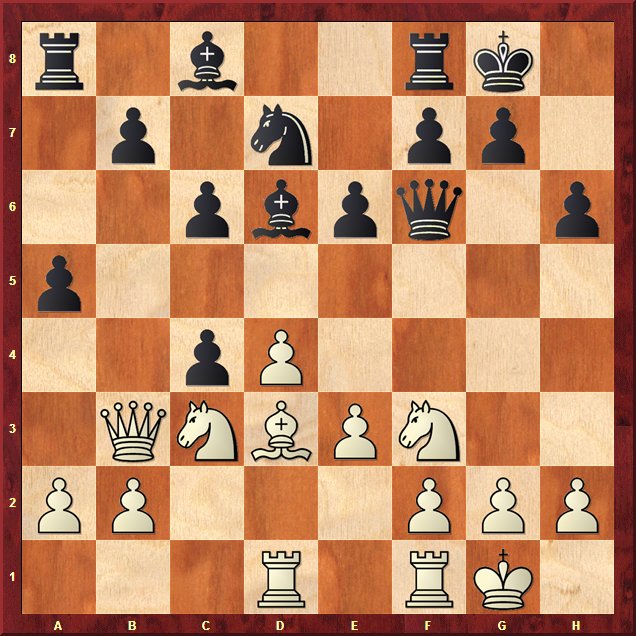 The theoretical discussion was very interesting, as Olga chose to take on c4 with the queen 12.Qxc4, which, first of all, prevents Black from playing…b5; also she saves a lot of time, since later on the plan is to continue with Bb1, Qd3; had she taken with the bishop on c4: 12.Bxc4, it would have taken ages to reroute the bishop.

The Russian kept the pressure on after her strong opening idea and eventually Anna Muzychuk had to flee into a lost rook endgame. 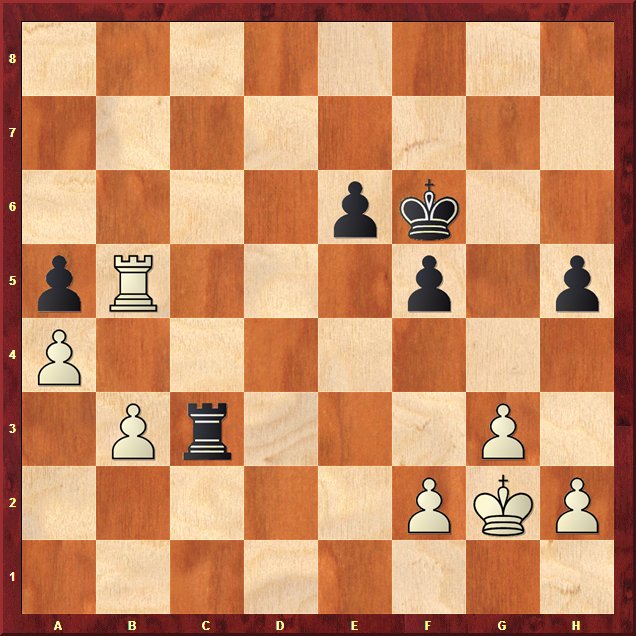 Muzychuk’s unconstrained 43…h4 (perhaps Black can still fight with a more passive approach, with a waiting move like 43…Rd3) speeded things up, entering a technically lost endgame. After more than five hours of play and a great deal of technique, Olga came out victorious, swapping places in the standings with Anna Muzychuk: she is now second, right after Hou Yifan! 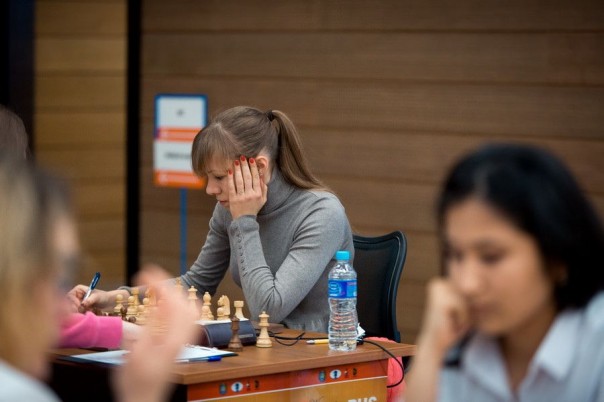 One cannot stop but admire the stamina of Hou Yifan, who doesn’t just want to conserve her lead but simply goes the hole hog to get a playable position. Just like in round six against Stefanova, the reigning women world champion went again for the slightly rare setup on top level chess against 1.c4: 1…b6 and 2…e6! No theory, no beaten paths, just a game of chess in China versus China.

Zhao, too, chose an original path, delaying the advance of the d-pawn and keeping the game between English territory. But when the pawn landed on d4, the structure became typical for the 3…dxe4 French defense. 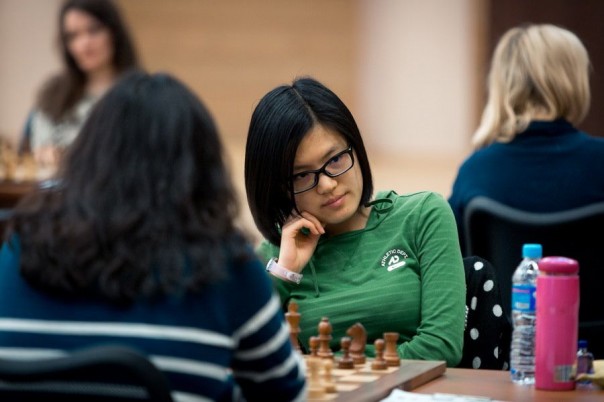 Yifan wondering where did her advantage go

Having no mercy for her friend and compatriot, Hou Yifan seemed to be doing more than ok, as she took advantage of her opponent’s inaccuracies and went on to win a pawn. The only problem Hou Yifan had was to avoid handing the initiative to Zhao Xue; 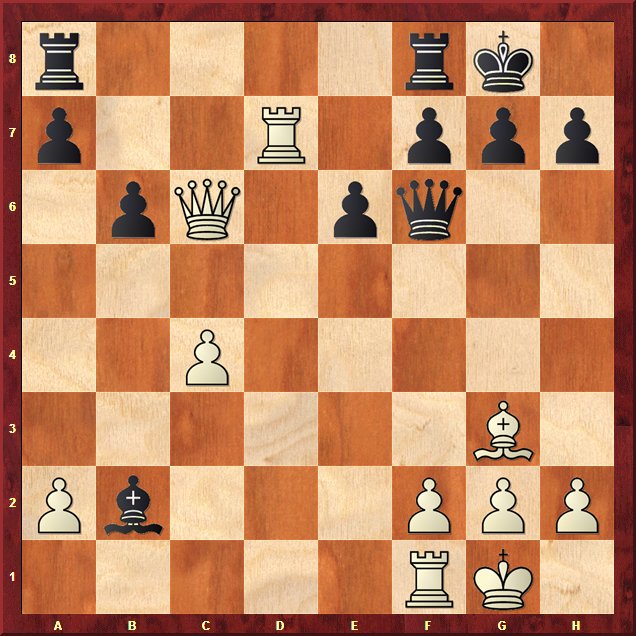 And this is exactly what happened, as Black didn’t find the most precise way ; the compensation proved to be enough to hold Yifan to a draw and to stop Zhao’s self-destructive mode from the unfortunate previous rounds. 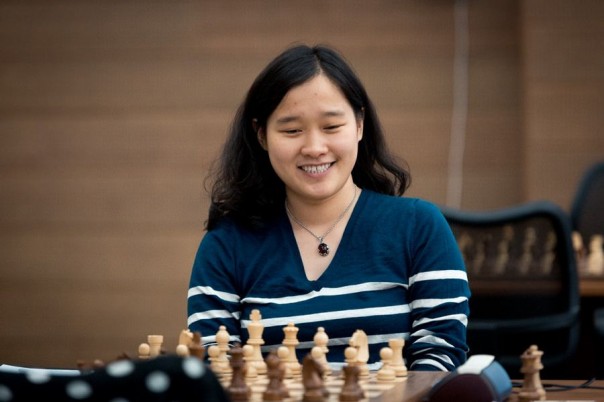 A well fought game for Zhao Xue, who stole today a precious half a point from the tournament leader.

A fierce theoretical French battle ensued in the game Kosteniuk – Lagno, so don’t get shocked by the early march of Black’s king, it is all in the books! 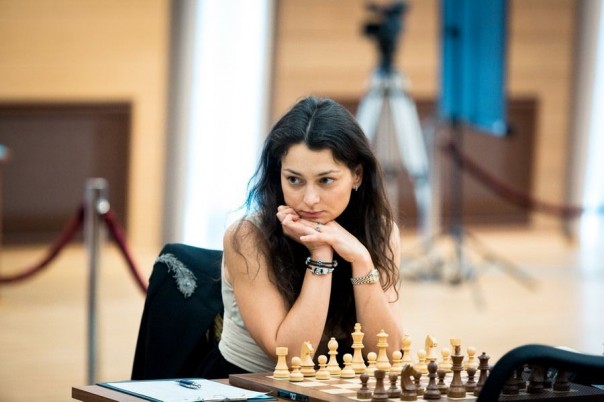 Later on, Kateryna’s very logical, developing and certainly suiting her sharp style, 8…Nc6 was perhaps a bit too slow, as it allowed White to quickly grab her chance with 10.Qg4, followed by 11.0-0-0 and an easier to play-over-the-board position. 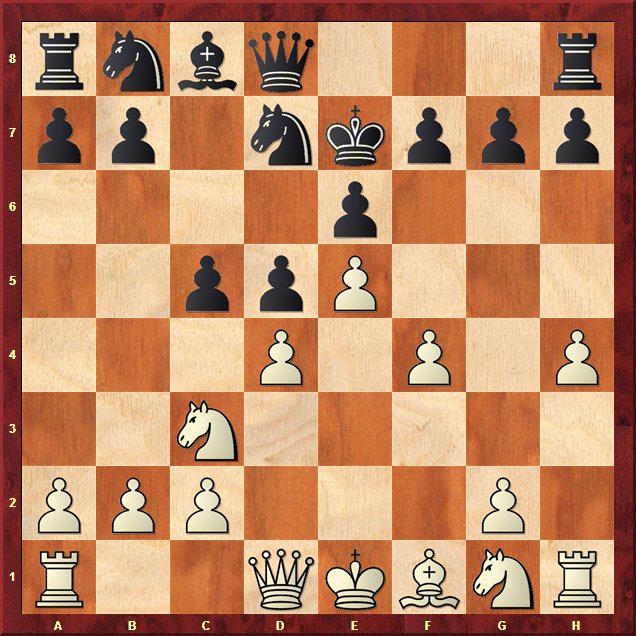 Instead, Black should have been fast and very precise, by either taking on 8…cxd4 followed by 9…Nc6 with gain of tempo, or immediately hitting on the b2-pawn with 8…Qb6. 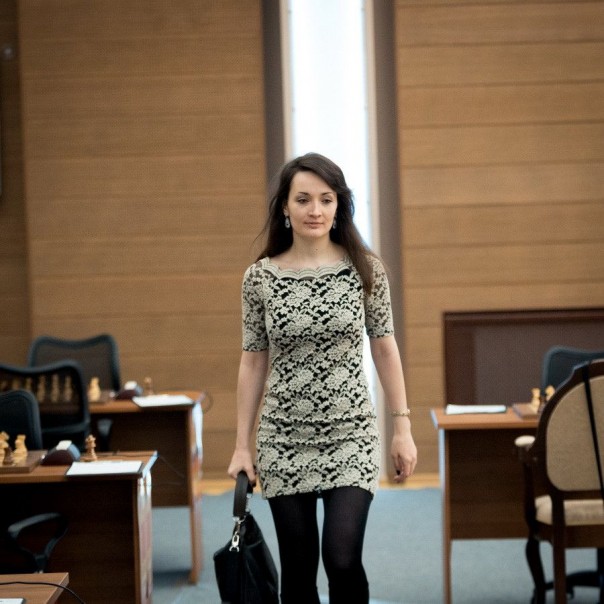 A game that might turn the unbelievers into real fans of women-chess!

As for what happened next…you know the title “Fire on board”?! It would suit this game pretty well, as the question was who’s attack will come first? White pushed the h-pawn, Black his b-one, White sacrificed the knight on d5… 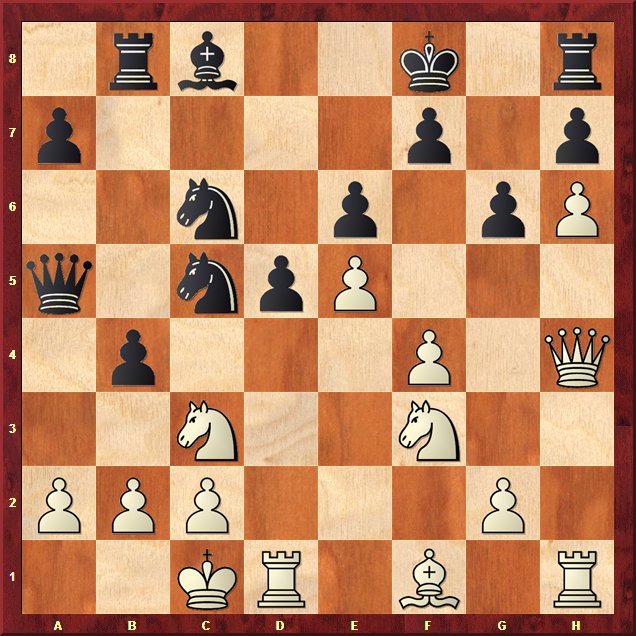 …Black took it and then gave a rook back, in return for promoting the b-pawn into a queen on the…a-file! Total chaos in this game, not clear who and if and where someone was winning, as the ladies did fight like real gladiators today! The readers are invited to carefully check the game and to let us know if White had a win along the way…the game ended in a draw by perpetual after 25 moves in 2.5 hours of play.

Nafisa’s fans were closely watching their favourite player’s game today, as she is getting closer and closer to her third and the last needed IM norm. 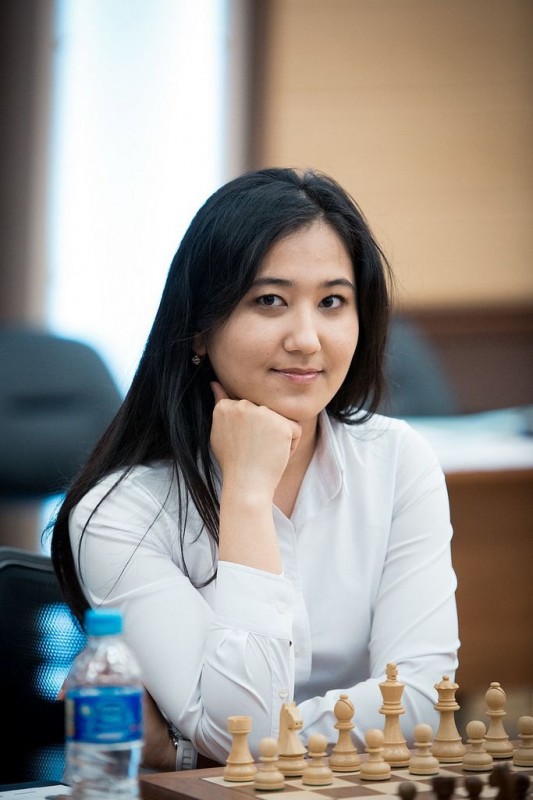 A potentially good day turned into a bad one for Nafisa…yet she is still on a very good +21 rating points!

Her 3.Bb5 Sicilian went just fine, following the typical plans for this opening up to the less common but certainly more aggressive plan with 7…c4, instead of the more popular 7…b5. The Georgian aimed to paralyze White’s position but, at the same time, this might backfire as this brave solder is vulnerable to b3/d4 breaks.

The Uzbek player didn’t find the exact moment to do that and soon Black enjoyed a more comfortable position. And yet, when the sharp ideas appeared on the board, Nafisa was ready to exploit them with the very thematic for this tournament (yes, I bet you’ve already guessed): 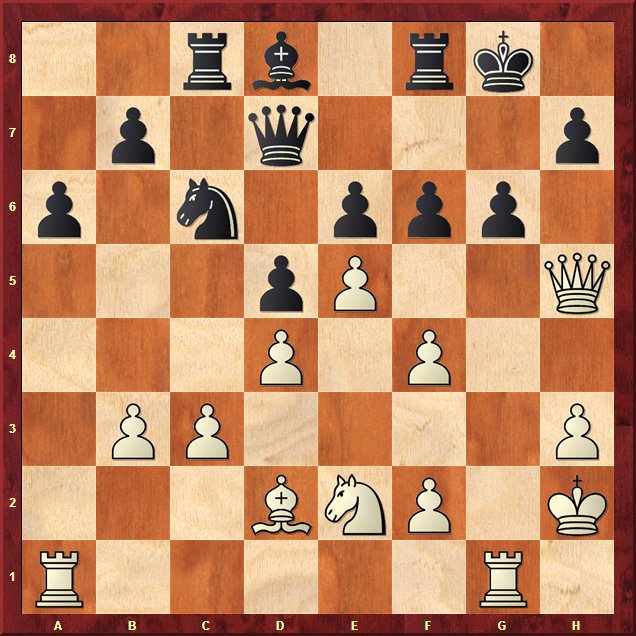 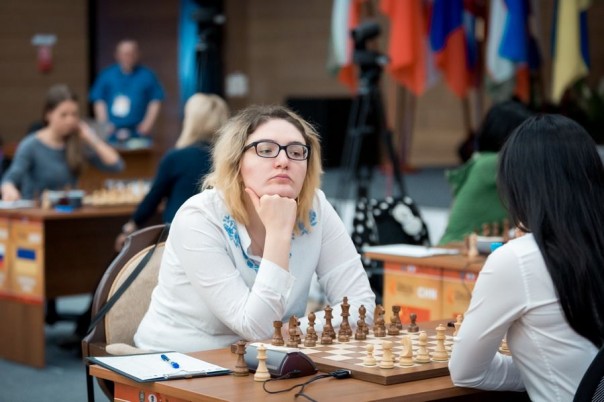 Nafisa missed the moment and, with the unpleasant interference of the devilish time trouble, suddenly the Georgian was on top! The final blunder appeared though on move 46: 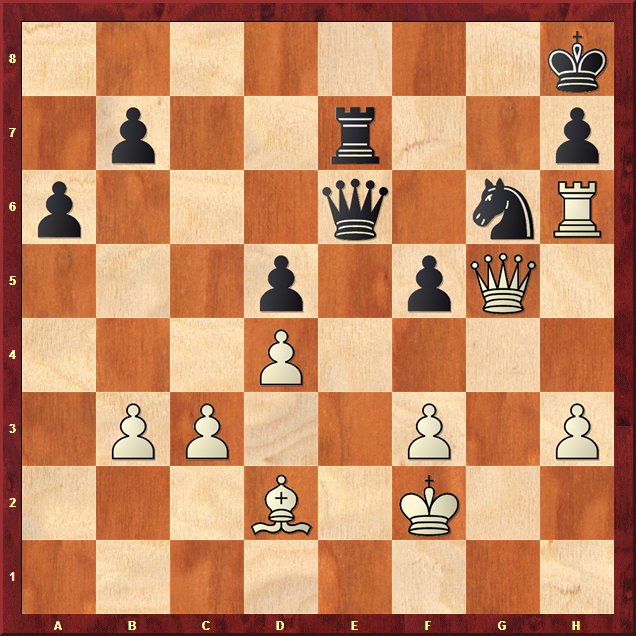 46.Qe3? allowing Black to end the game with 64…Qd6, and White’s king is simply too vulnerable; he should have saved his skin with 46.Kg3…

Pity for this shortcoming, as Nafisa had an excellent tournament so far; but a good way for Nana to enter the rest day on 50%.

Antoaneta must have been born under an explorer’s star…we still don’t know how she manages to regularly get her opponents out of book as early as move five!

And yet, experimenting implies an elevated dose of risk. The unnatural development of the queen’s knight and excessively moving around with the same dark coloured bishop caused White being underdeveloped, without any control in the center and virtually lost, had Batchimeg played: 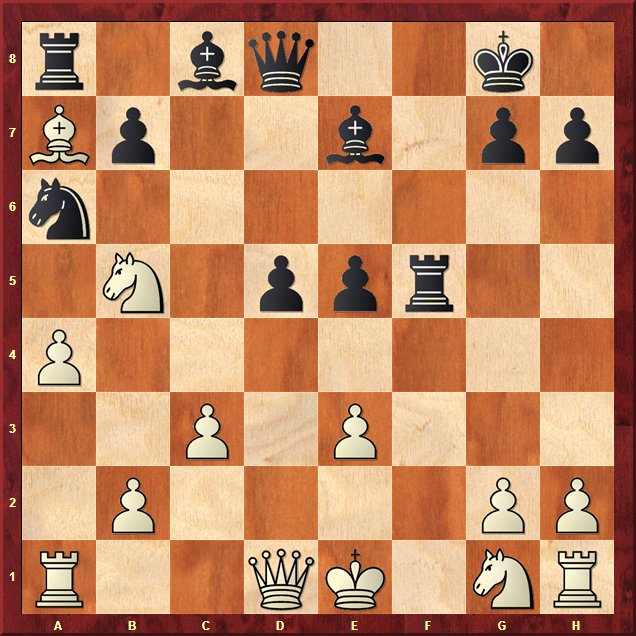 17…Bc5! where after 18.Bxc5 Nxc5, e4 comes, with complete domination on the light squares. Stefanova’s creative play got her in a bit of trouble today…as she later on confessed:”I played horribly”. 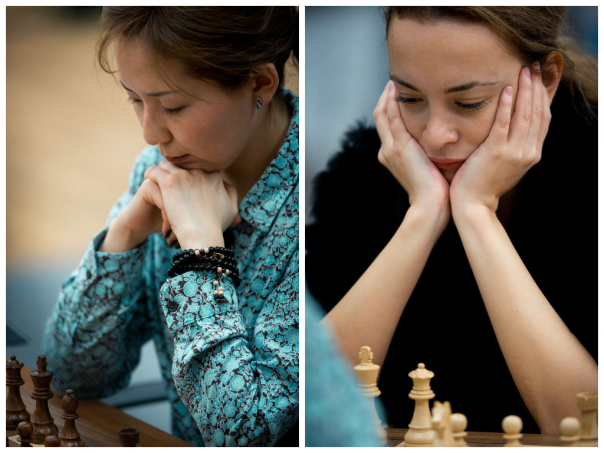 But the Mongolian didn’t accept the gift from move 17, played a bit insecure and slowly but surely the advantage slipped away. During the mutual time scramble lottery, Batchimeg got herself into trouble, when, as Antoaneta said during the press conference, the Bulgarian could have posed more difficult questions with 29.Qf3 and the obvious idea of taking on e6. With the clock mercilessly ticking for both players, the comedy of errors ended by perpetual check.

Another common theme for the Khanty Mansiysk FIDE Women GP is the Tartakower variation of the Queen’s Gambit, which keeps on popping up. So once again we see this more subtle weapon in the hands of Ushenina; but something must have happened, as she played her moves fast and confident yet mixing up the move order, getting no advantage as White after the opening. 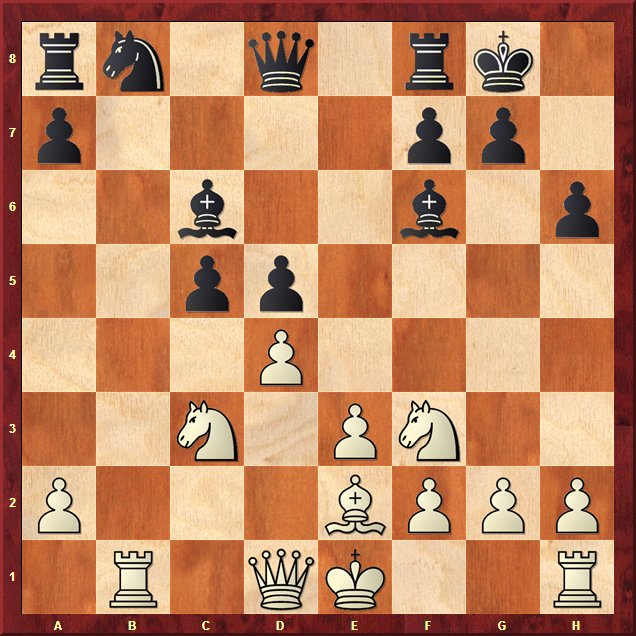 Ushenina’s 14.Bb5 was played one move too early, allowing Kosintseva to equalize with 14…a6; theory goes 14.0-0 first and only after Black has placed the knight in a less favourable position with 14…Nd7, then comes 15.Bb5. 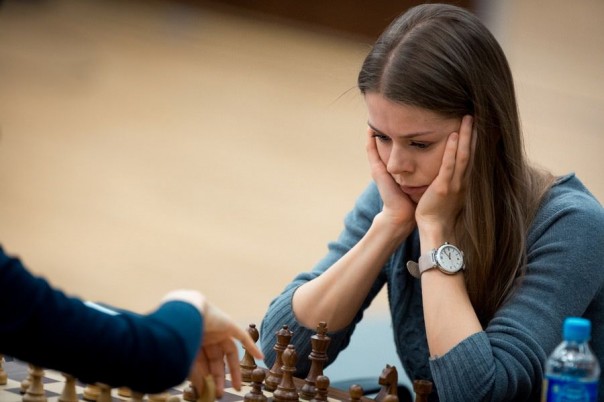 Not Tatiana’s tournament so far

After this ‘hand slip’ from White, Black’s position was somewhat comfortable, where the bishop pair ruled the board in the latter stage of the game and around move 42/43 Tatiana’s advantage was getting really serious, thanks to the strong supported passed c-pawn. But then the unfortunate move 48 came, where the Russian GM missed a little trick: 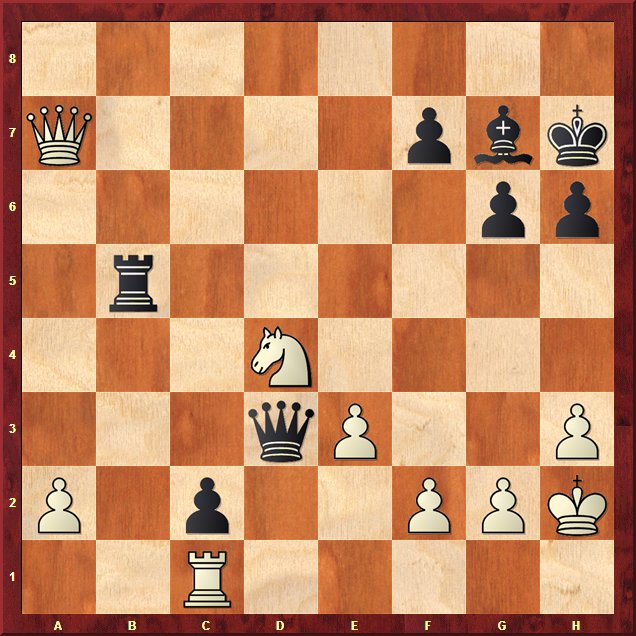 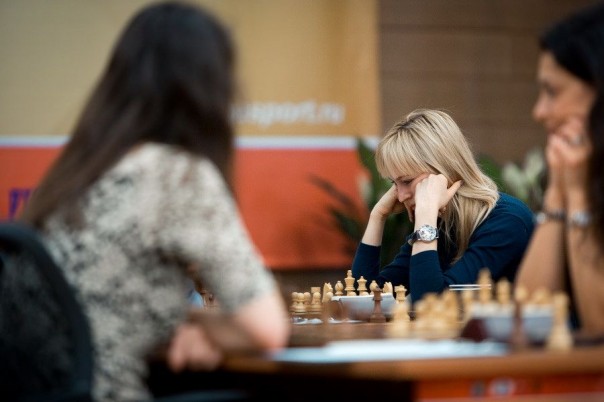 Anna had to work hard for her point

After having stabilized the position and without Black’s dangerous c-pawn, Anna Ushenina won the game without any further disturbance.

The initial question about catching the Hou express remains open…And just like in the popular TV shows, the commercial announcement arrives at the most interesting moment – we now take a break with a free day!

One thought on “The sensational Olga Girya!”