Hou Yifan express keeps a steady pace forward after today’s win against Anna Ushenina, to the despair of second place, requested by Anna Muzychuk, who also won her game against Zhao Xue. Just like in yesterday’s standings, third comes the local hero, Olga Girya, with a remarkable 4.5/7, after winning a beautiful game (we highly recommend it to our readers!) against her compatriot and former women world champion, Alexandra Kosteniuk.

As you might have noticed, absolutely nothing changed at the top: Hou Yifan is waving from her 1st position to Anna Muzychuk and Olga Girya, who are on the 2nd, respectively 3rd place and some work to do to catch up with the Chinese, as she is a full point ahead and only 4 rounds to go. 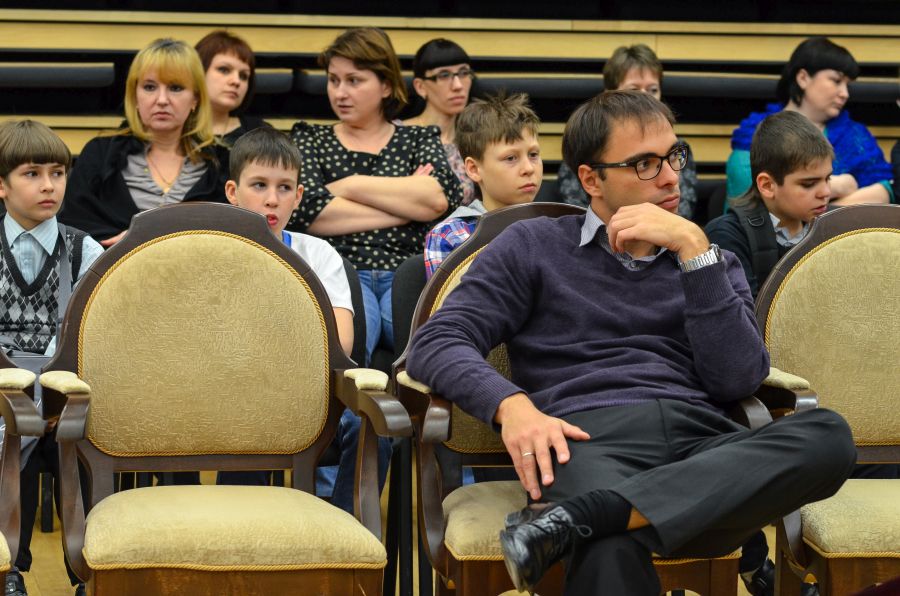 Chess fans and Grandmasters alike enjoying the thrillers of today

On 50% we have four players: Antoaneta Stefanova, Alexandra Kosteniuk, Kateryna Lagno and Nafisa Muminova, who keeps on proving her tactical skills after today’s win over her friend but rival on the chess board: Batchimeg Tuvshintugs.

Less fortunate are the players on 3 points: Zhao Xue and Anna Ushenina, who lost their games today; also on 3 points is the Georgian Nana Dzagnidze, after drawing Kateryna Lagno.

Last but hopefully not least, are Tatiana Kosintseva, with 2,5 points and a rough tournament so far, as well as Batchimeg Tuvshintugs, who has difficulties to restore her bad luck.

In this crucial meeting between the reigning and the former World Champion (almost some sort of revenge game after their match, which passed the crown from Ushenina to Hou Yifan), White used the latest trend in the 3.Bb5+ Bd7 Sicilian variation, choosing the previously neglected 4.c4. Many top players used it in 2013, including World title candidates Karjakin and Svidler.

After ten moves the position was almost identical to a popular Maroczy Sicilian tabiya with the only difference that the white bishop was on b5 and not on e2.

Ushenina seemed surprised by her opponent’s choice and barely out of the opening, she had only half an hour left. 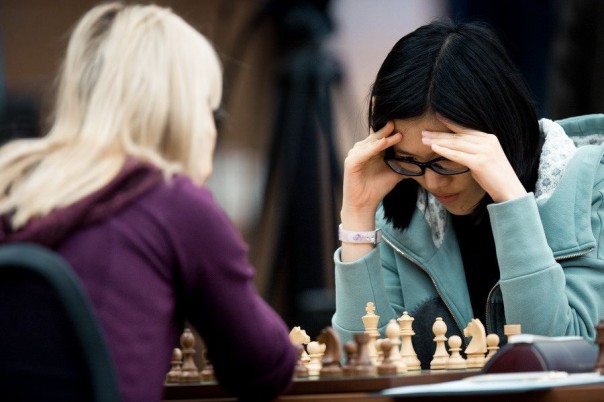 Hou Yifan didn’t let such a ‘little’ detail like extra time to go away, pressed further and  when the critical moment came, the Chinese squeezed the life out of Black’s position with the strong: 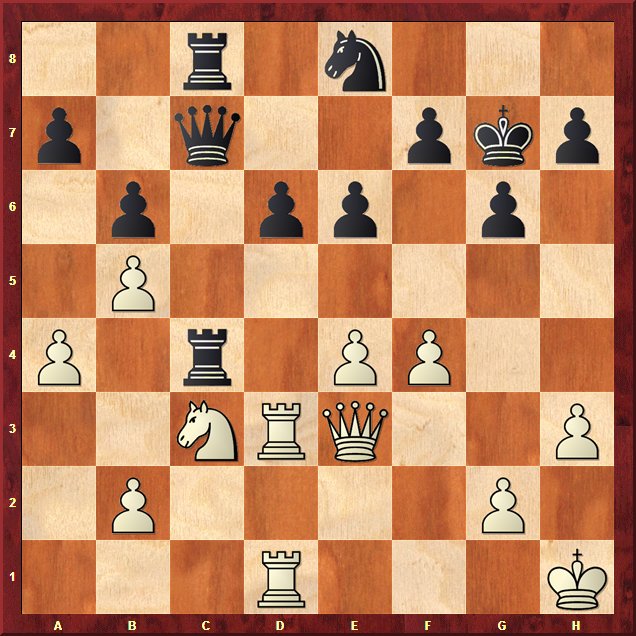 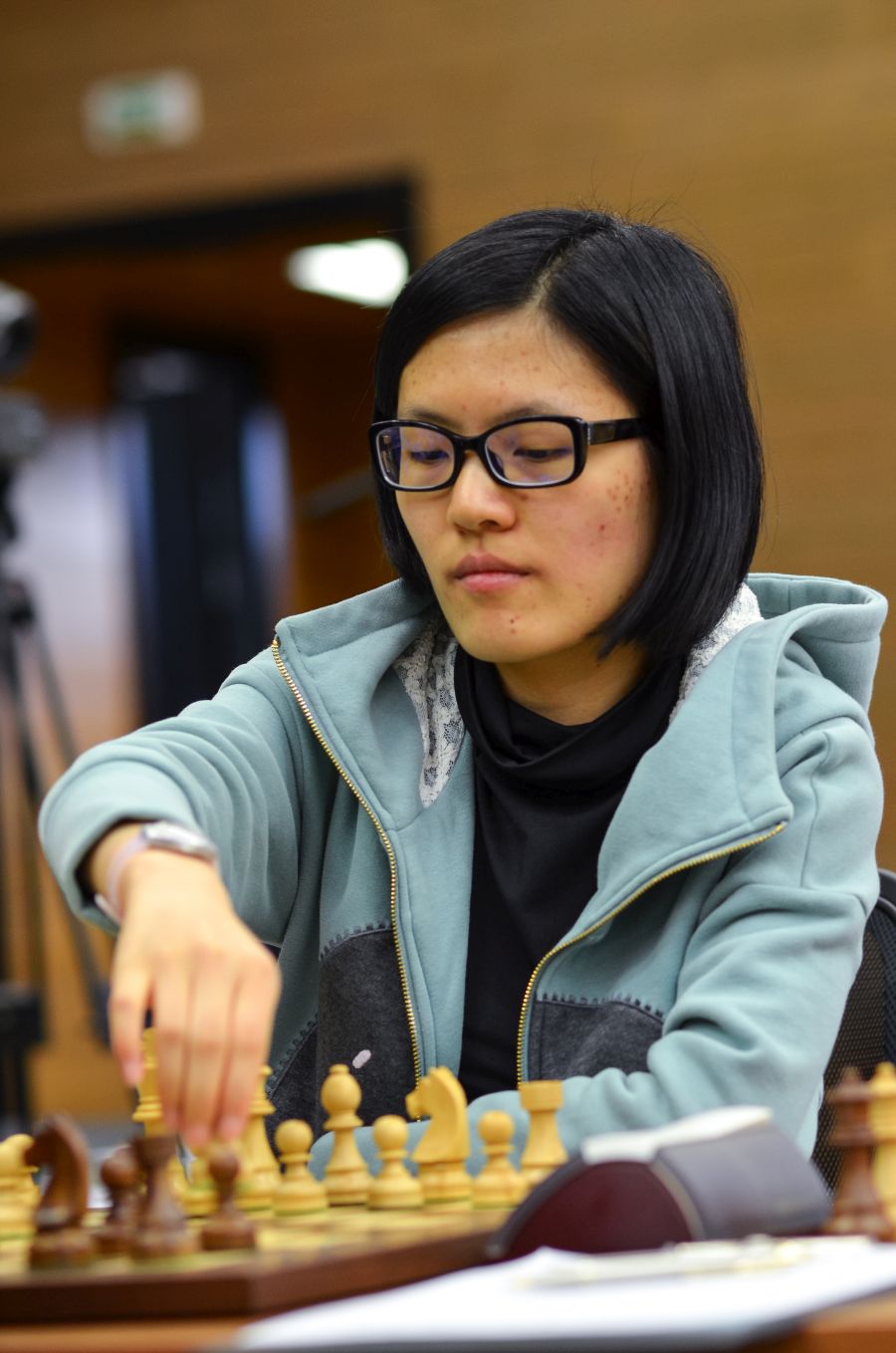 Soon after, the Chinese proved that not all rook endgames are drawn, as she confidently converted her advantage into a full point.

Who would have thought that a classical and rather strategical opening can bring so many fireworks?!

For 11 moves, the Tartakower line of Queen’s Gambit followed in the footsteps of the third round encounter Ushenina-Kosteniuk. Olga Girya deviated with 12.a4, preventing Black’s queenside expansion with …b5, but otherwise the scenario was similar for a few more moves, including 13…Qe8, which, although a novelty in this concrete position, is a typical maneuver in general. 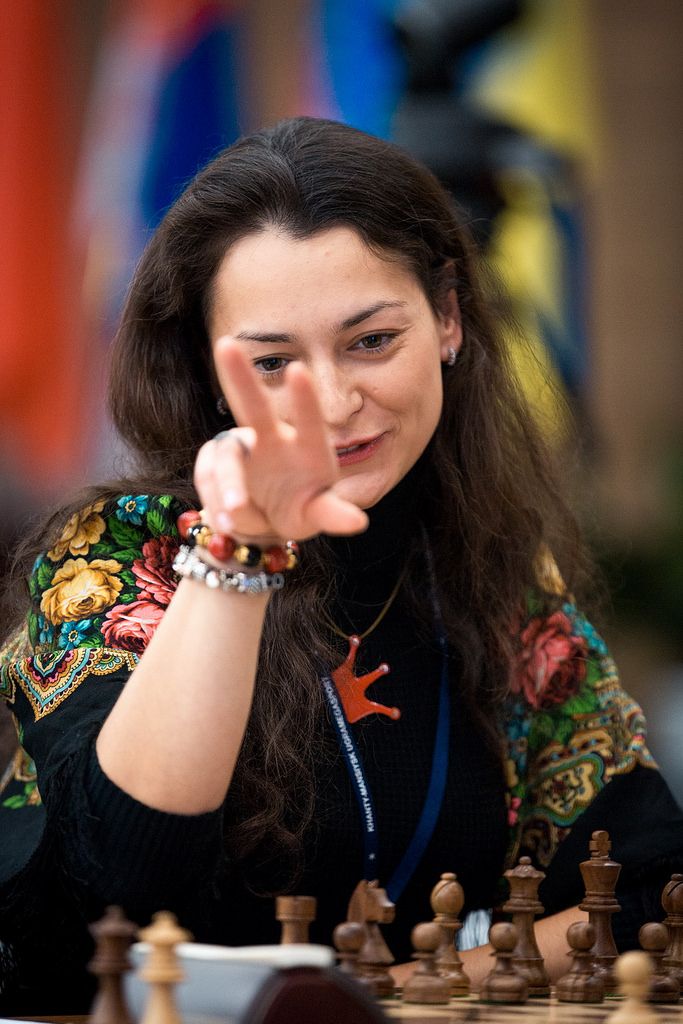 Black’s next move, 14…Bd6, was also quite original and the game took an unusual course for this opening when the center was blocked. During the press conference, Alexandra Kosteniuk expressed her opinion:”When I went for this setup, I thought I should be doing fine; but if I cannot find the right way, Black’s position will fall apart” like a sandcastle. 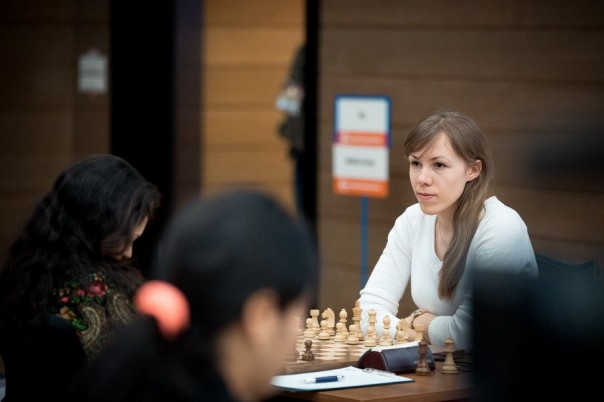 Fireworks all over in the Russian derby!

But Olga found an extremely interesting idea, bombing the center with the dynamite: 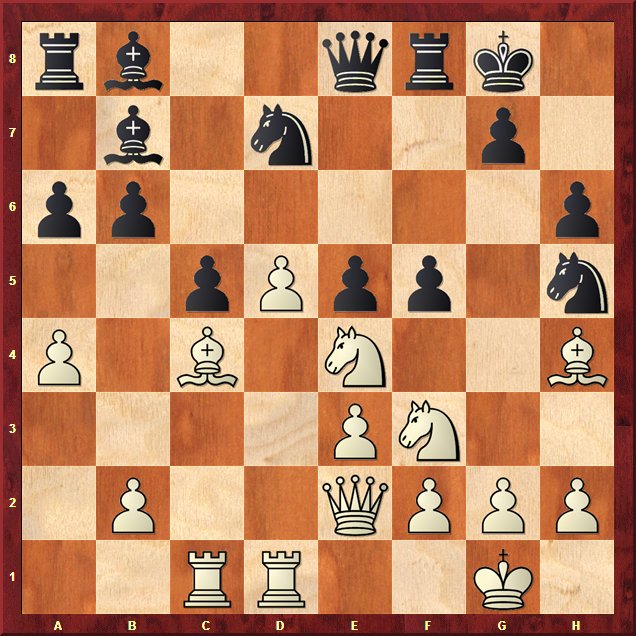 19.d6! Kh8 followed by 20.Be7! fxe4 21.Nh4…fantastic concept, giving a full piece in return for a dangerous attack. She continued with yet another strong move, completely dominating Black: 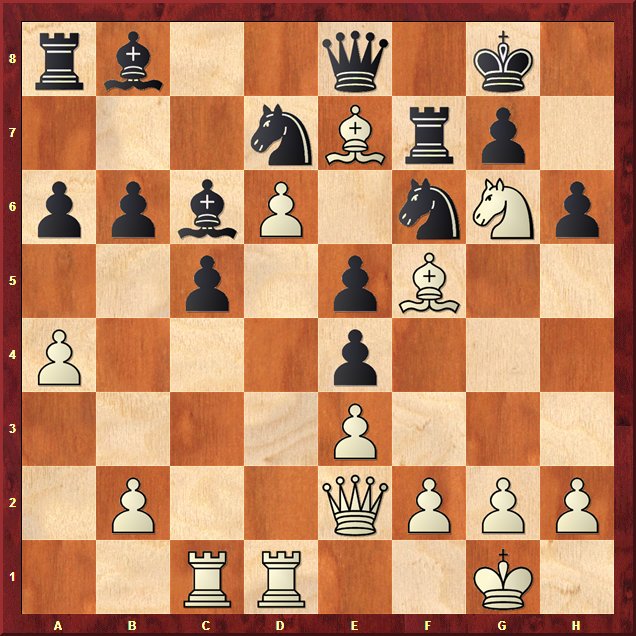 25.Qc4! and the question is…how can Black untangle from such a cramped position ?Alexandra didn’t find her way out and the mutual time trouble didn’t help either. This time though, Olga Girya was not disturbed anymore by the ticking of her clock: 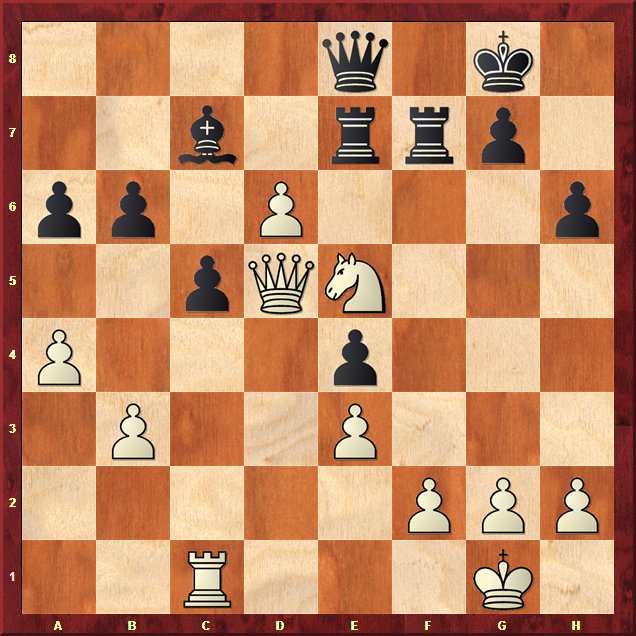 Which of the hanging piece would you take? If you chose: 31.Nxf7 Rxf7 32.dxc7, where the c-pawn decides the day, then you would be in Olga’s victorious footsteps, who confidently went on to win what we would call: the game of the day! 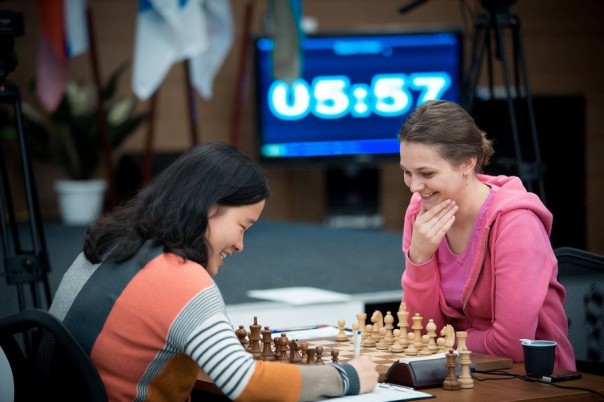 Recalling the incident of yesterday…

In the Italian game (which Zhao didn’t expect, as she said during the press conference, although the Slovenian GM did play it in the 1st round of this event), Muzychuk chose the solid and flexible Giuoco Pianissimo, based on d2-d3 rather than an early d2-d4. From modern perspective, this doesn’t look that passive anymore, since in the Ruy Lopez White plays d2-d3 quite a lot these days. Zhao met her opponent’s lack of early territorial ambitions with the active 8…d5, causing the game to be to a lesser extent „pianissimo”.

Black seemed to be doing fine but then Anna Muzychuk found what even computers have difficulties to discover: a positional exchange sacrifice! 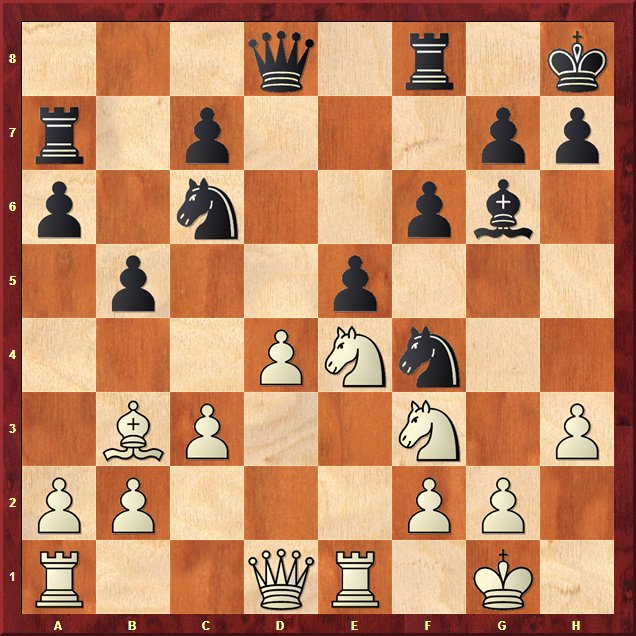 17.dxe5! , which put Zhao Xue under big pressure, as her king had to open up after 17…Nd3 18.exf6 Nxe1 19.fxg7+ Kxg7 20.Qxe1 where White has excellent coordination and Black’s pieces are scattered all over the board.

When initiative is handed in the skilful hands of Anna Muzychuk, little can still be done and Zhao Xue had to accept it was again, not one of her best days.

Faithful to her principles, Stefanova played the 3…g6 Ruy Lopez, not really an unusual line, but definitely not a topical one, either. The game simplified soon, reaching a position where both players had double pawns. White’s kingside structure enjoyed higher mobility though, allowing Kosintseva starting a positional attack. 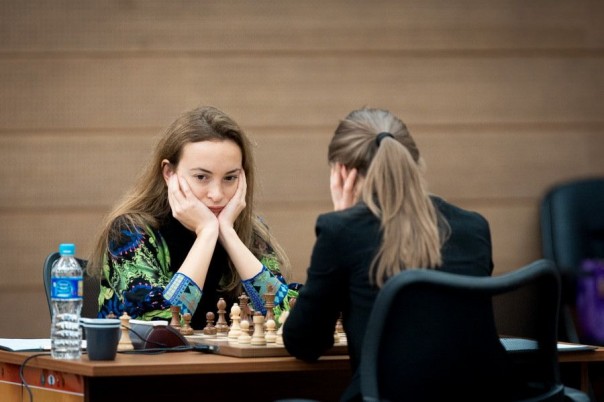 A fair result in Russia vs Bulgaria

The Bulgarian sensed the danger and countered back on the queenside, questioning White’s strategy who had to come up with yet another punch, the very often seen key move this tournament: 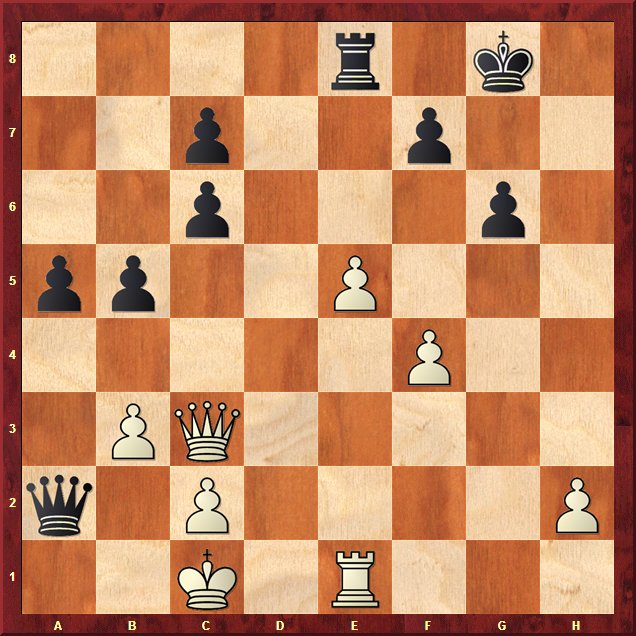 23.f5! played by the Russian GM (this important move keeps on coming, even for this game it is the second time!). After all the pieces went off the board, the players agreed to shake hands in the rook endgame: a draw before the time control.

Trying to improve her tournament position, Batchimeg met the Nimzo with the same line as in the first round game Ushenina-Muminova. This time, Nafisa Muminova didn’t allow the transposition to the Saemisch attack and the massive central pawn aggression anymore, deviating with 7…dxc4. This is supposed to offer Black free piece play to compensate for White’s bishops’ pair and mobile center. The Uzbek player seemed well prepared, as she played relatively quickly the next moves, while her opponent started going down on her clock. 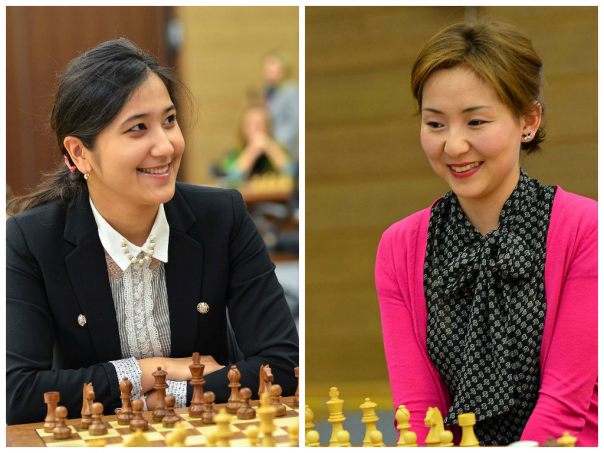 Rivals on the chess board but friends outside the tournament hall

After yesterday’s excellent game against Tatiana Kosintseva, Nafisa delighted the public with yet another attacking game! Having the upper hand out of the opening, She crowned her excellent play with the beautiful: 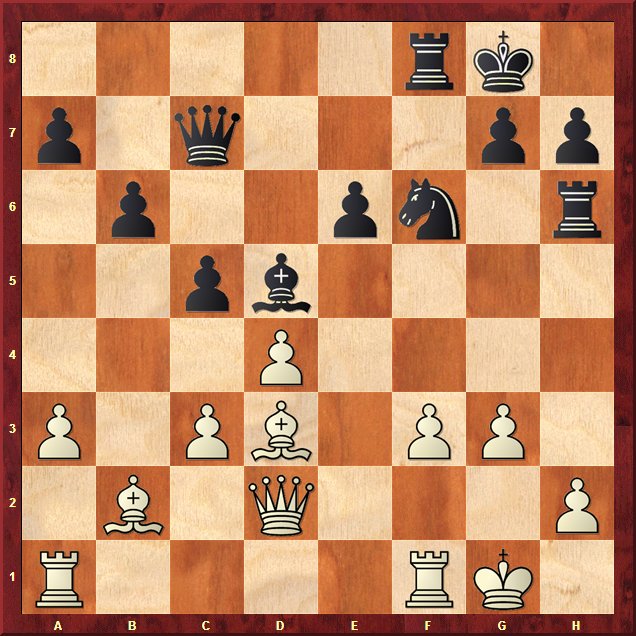 In the shortest game of today (16 moves in two hours), White chose one of the most principled systems against the Grunfeld, the 7.Be3 exchange variation. Curiously, Nana Dzagnidze seemed surprised by the highly topical 10…Rd8, as she expected 10…Nd7, which Katya has played before against her. 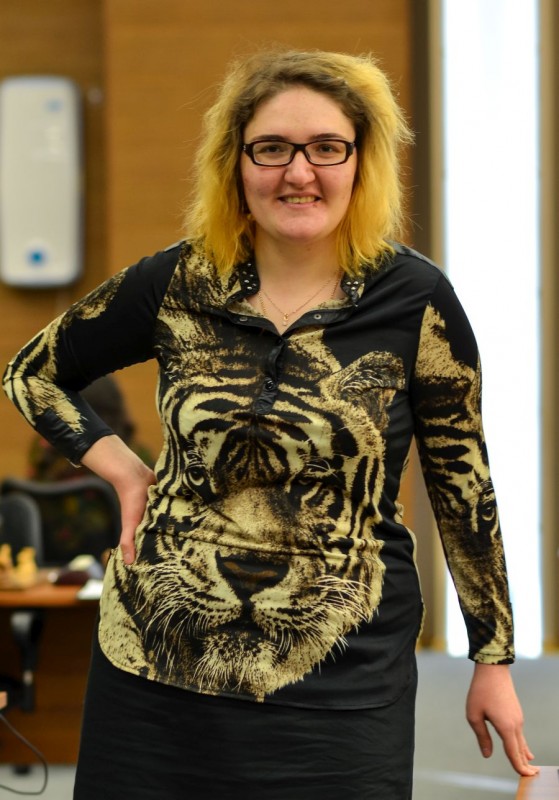 Nana Dzagnidze in fighting spirits! But she didn’t get the chance today…

To get over the board something which you haven’t checked right before the game in the sharp and tricky Grunfeld, is not a dream came true…After a long thought, Nana played the modest 11.h3 and on the next move didn’t find anything better than forcing a draw by repetition. To call it a day was the practical approach, which most players would opt for, too.

One thought on “The Hou Yifan express”