The history tends to repeat itself and chess is no exception: another cut-throat day, with no less than five decisive results and just one draw!

After the second round of the FIDE Women GP in Khanty Mansiysk, Hou Yifan is in sole lead with 2 points out of 2. She got an advance in development out of the opening, which Tuvshintugs was not able to neutralize. The spell was broken and the Black scored the first point in the tournament. 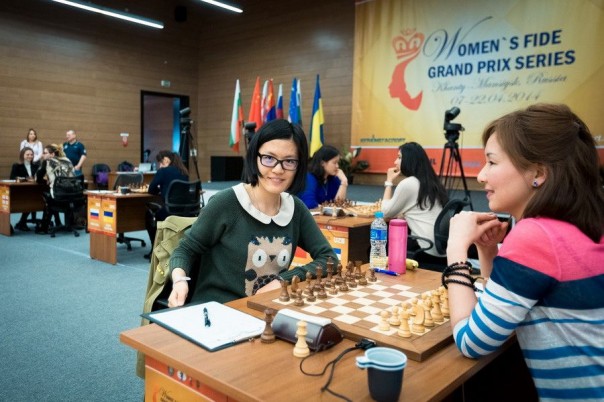 Perfect score for the Chinese GM: 2/2!

But the big upset of today’s round was provided by Muminova who defeated Zhao Xue with the white pieces. What initially looked as a rather suspicious forth and back maneuver Bc1-e3-c1, escaped unpunished and even turned out to be completely justified after the subsequent 16.Bb2 and the strong 33.f4! 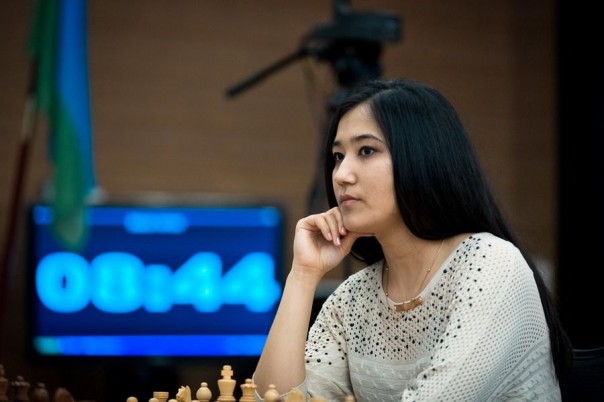 Nafisa Muminova was the surprise of today

Furthermore, in the Russian derby Kosteniuk – Kosintseva, Black won again, after a very sharp and interesting battle. In a Two Knights Game variation involving an early black pawn sacrifice, Kosintseva took over the initiative and after 35 moves proved that White’s lack of development and poor coordination were fatal.

Similar story but with reversed colours, occurred in Lagno-Girya, featuring the same pattern with an uncastled king. Black played creatively yet risky, to which White fought back, found a nice antidote via an exchange sacrifice and went on to win the game in a a hopeless endgame for Black. 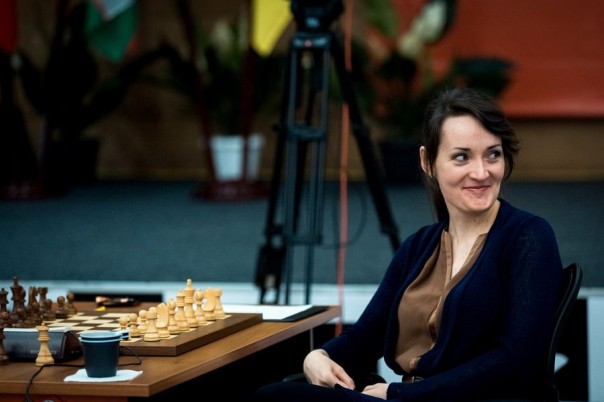 Lagno is back on 50% after today’s win

In a game featuring mutual opening surprises, since both players were out of book on the 7th move, as they confessed during the press conference, Muzychuk equalized comfortably against the Georgian GM and seemed to apply some pressure in a preferable endgame. It proved not enough as Dzagnidze reacted in a surgical manner and went on to draw the game.

The last decisive result occurred in the direct encounter between two former women world champions: Stefanova vs Ushenina. The Bulgarian made us believe the position was a Reti, it moved into a Catalan/Slav sort of game and ended up in a Caro Kann, Advance variation structure – a true hybrid, as Stefanova tends to spoil her fans with her innovative play. The game faced a fierce strategical battle, which was greatly conducted by White and Black succumbed in the endgame, after a long day of pressure.