By all the rules of the somewhat undefined and yet implacable science of probabilities, keeping the pace of five decisive games per day was virtually impossible. In the third round, the drawing rate finally took revenge, as we only had two decisive games. But if we examine the games from the combativity point of view, we can quickly notice that nothing has changed essentially with respect to the previous days. Moreover, if Girya, Ushenina and Kosintseva had converted their winning positions into full points, we would have had another amazing day with only one draw!

Amazing game of Hou Yifan who is on 100% after today’s win! A model game that should be studied by any chess enthusiast!

It promised to be a sharp game, as the Georgian GM has the tendency to complicate matters, feeling like a fish in the water in unclear positions, unlike many other players, who go for safety first. She chose her main weapon, Sicilian, but soon a maneuvering type of hedgehog emerged, where Hou Yifan succeeded to force 10…dxc6, thus clearing up the way for the Ne4 jump for a lasting, slow attack. 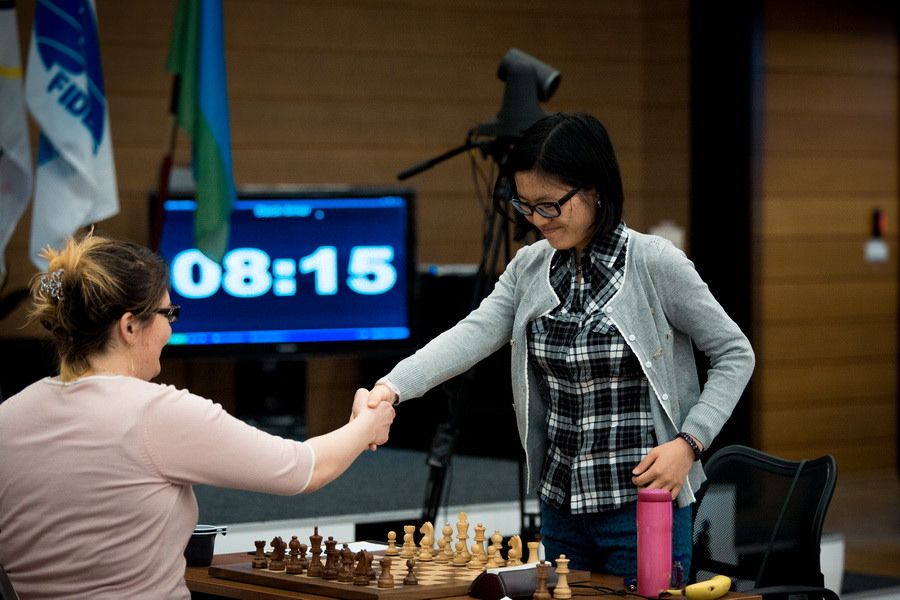 During the press conference, the Chinese suggested 10…Bxc6 as a better alternative, to which the Georgian replied she was still in her home preparation. What surprised her though came later on, 14.Qh3 (played over the board by Hou) instead of 14.Qg3, which Nana expected.

Yifan’s powerful play increased White’s advantage rapidly and it made it obvious for everybody with the spectacular: 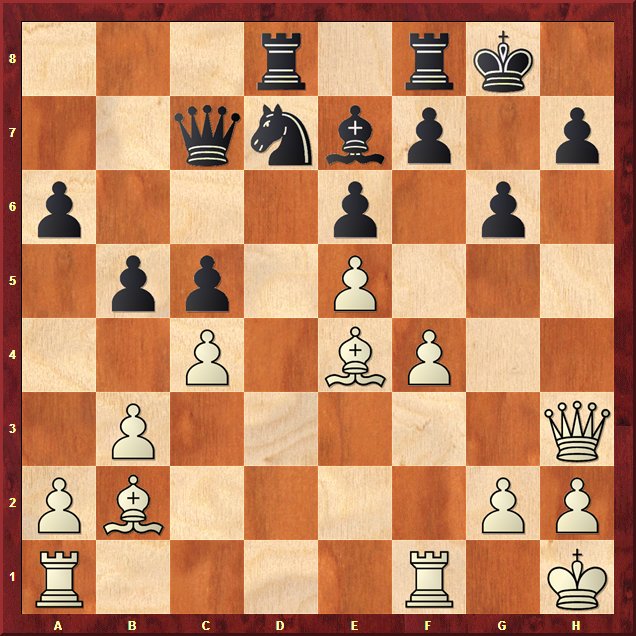 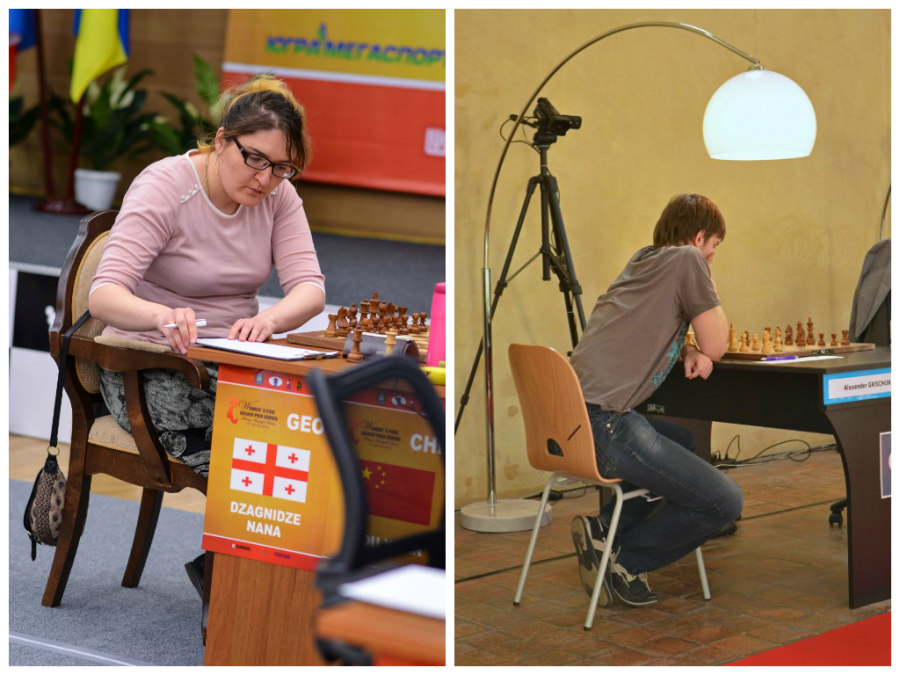 Not a good day for the Georgian player, who remains on half a point, but with 8 more rounds to go there is plenty of time to recover. The change from the too comfortable business chairs into a bit less pretentious ones (photo above) reminds the readers of the same occurrence, employed by the Russian GM Grichuk, in the men FIDE GP from Paris:)

For Yifan, the start of the turnament went smooth enough, as she is on 3/3, plus 9.1 rating points, two wins under 25 moves  and a full point ahead of Muzychuk and Zhao Xue!

The second decisive game of today went to China as well. Zhao Xue came well prepared, surprising the Bulgarian in the 4.Qb3 Slav, who burned a lot of time to find her way out from the unknown territories in her first game as Black in this event.
As the game continued, Zhao missed an important moment where she could have got the utmost out of the game: 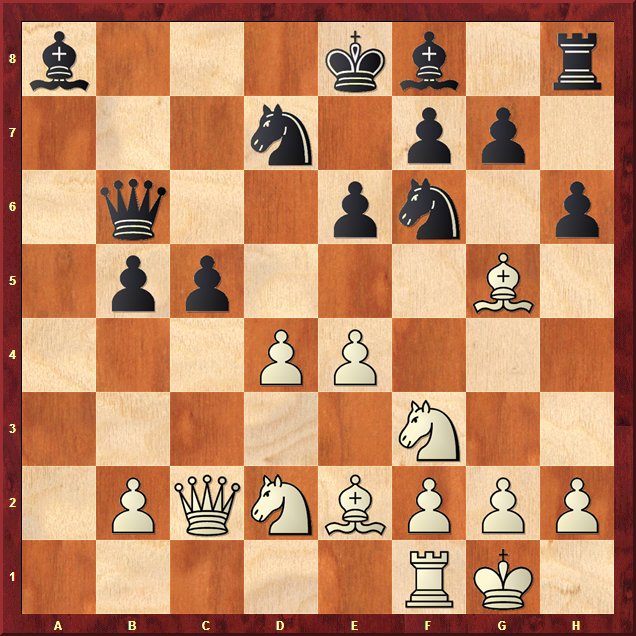 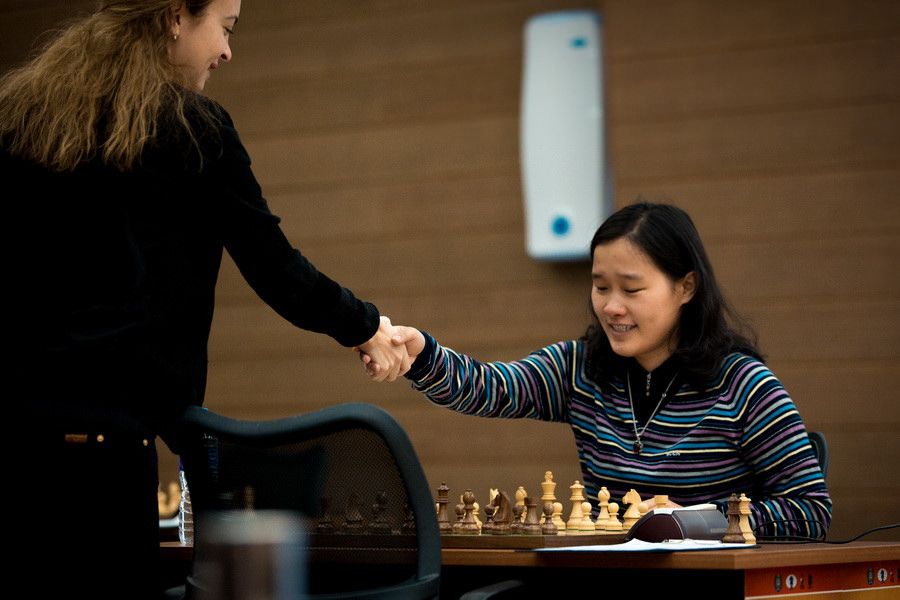 Zhao played the natural but less forcing bishop retreat:
15. Bh4 still keeping the upper hand and causing problems in Black’s camp, as he suffers some lack of development and the king is not yet safe.
Further on, the advantage increased for White but somehow it slipped away after many hours of play and with some help from time trouble too. What seemed to have been a point for Xue changed into a dead drawn rook endgame, had Antoaneta played: 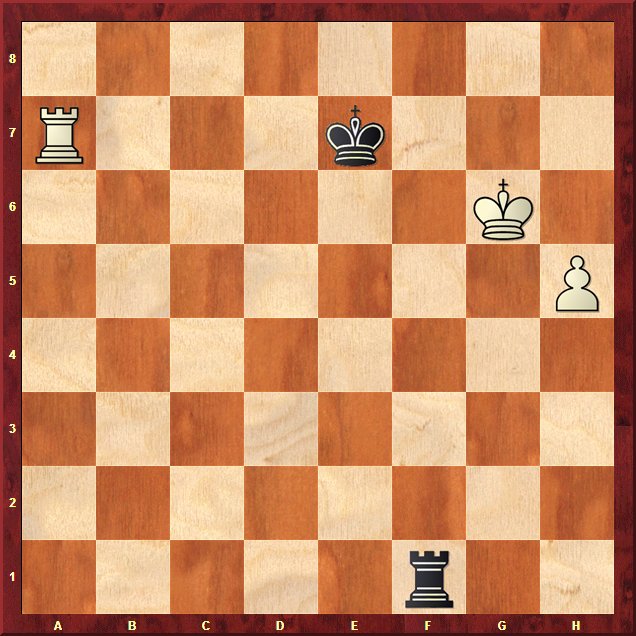 66…Ke6; probably this 6 move number tripled into 666, as she went for the unfortunate:
66…Kf8? Inviting White to place her rook with tempo on the heavenly a8 square;
67.Ra8+ followed and now the little a-pawn cannot be stopped anymore from promoting, as the h8 is covered by the rook on a8 and Rxh7 ideas fail to Ra7+.

Although with ups and downs, it was a good recover for Zhao after yesterday’s loss, while the Bulgarian suffered her first defeat in the event.

What is usually considered a more strategical and cautious way from White to meet Najdorf with 3.Bb5+, in the hands of the talented Slovenian GM it could have turned into a possibly lethal weapon. She continued her original opening approach with an early 6.e5 and the strong 12.h4, a rather unpleasant move to face over the board with Black. But Lagno proved her class, as she managed to extinguish white’s initiative with a series of accurate and clean moves, starting with: 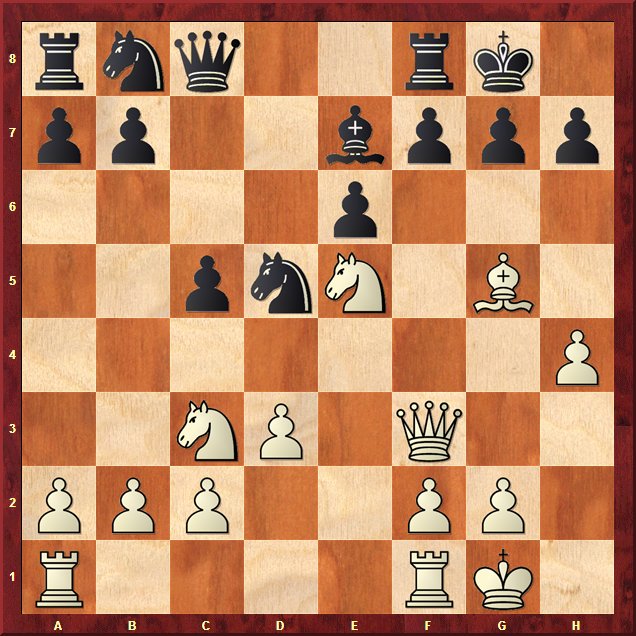 12…Nc6! The exclamation mark stands as a remembrance of the unfortunate first round, when the Ukrainian failed to play exactly the same move, at exactly the same time against Zhao Xue! And this is why GMs are GMs…they learn their lessons. 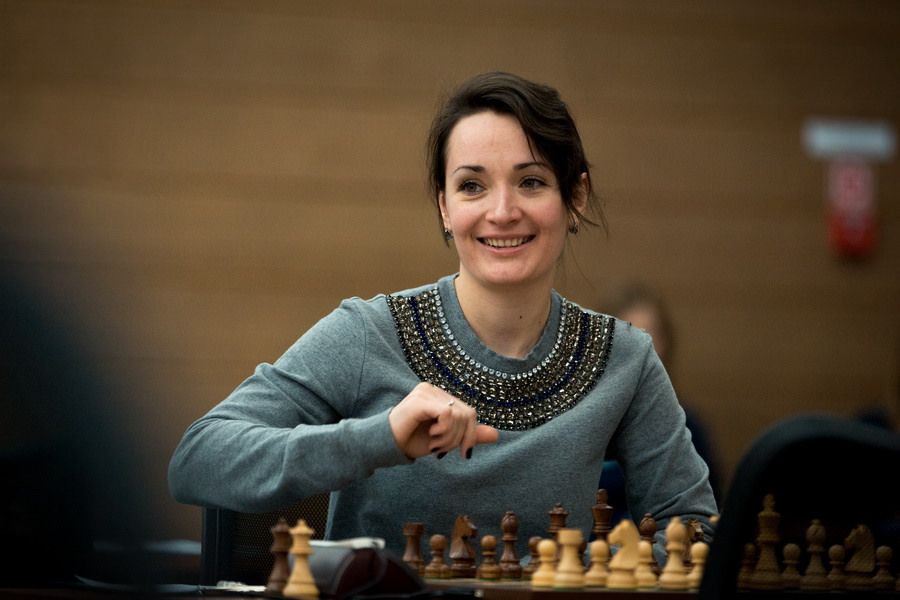 After all the pieces were liquidated, White’s threats faded away and a draw was agreed soon after, in a pawn endgame. During the press conference the players tried to find a moment when White could have seized the initiative but despite all the attempts, they agreed a draw was the logical result of correct play.

Playing on your birthday might be a difficult affair with all the attention around this special day…but for a professional player like Tatiana, things were kept under control, at least up to the shaky time trouble. 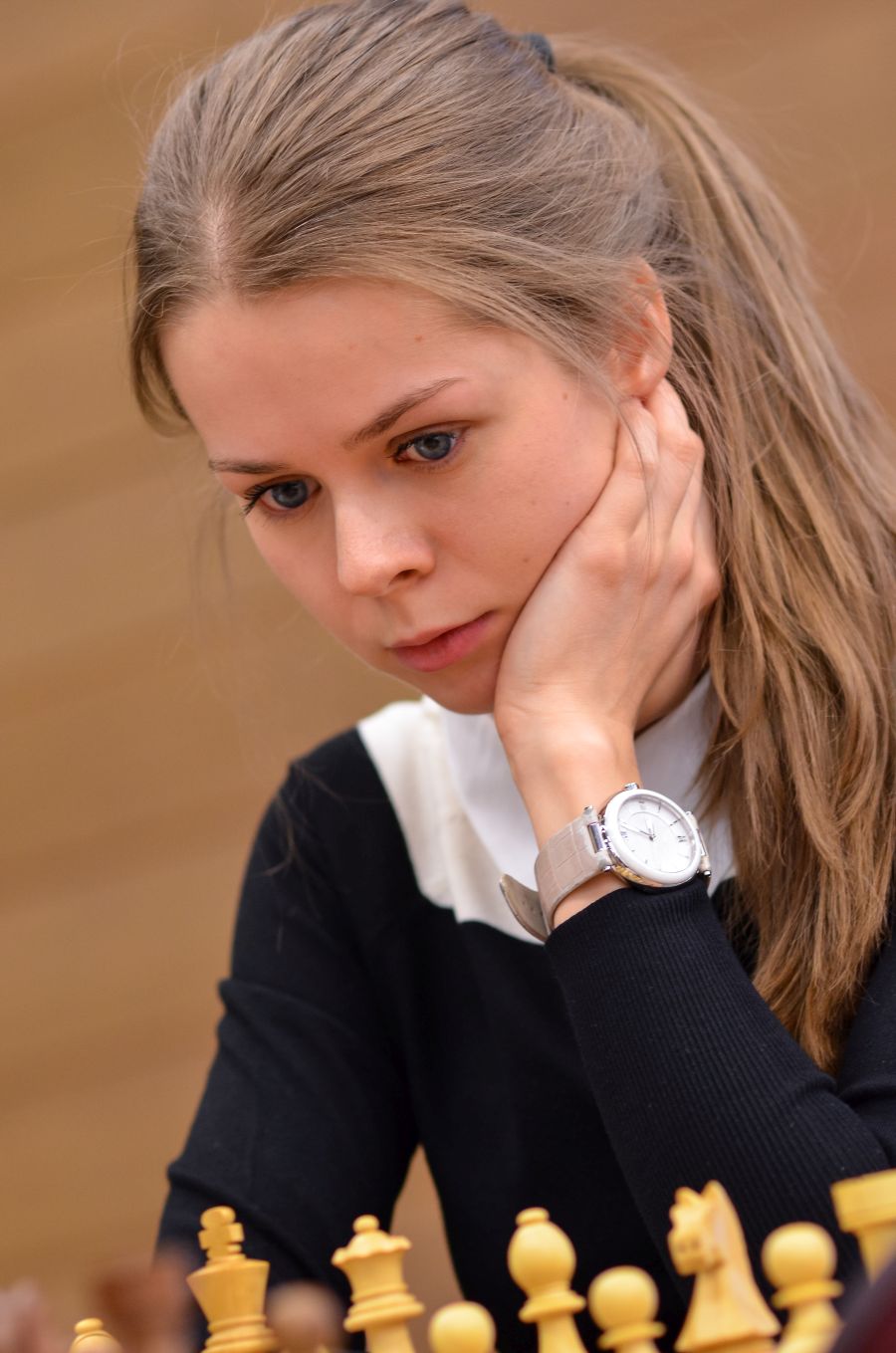 In the Berlin with 4.d3, she played the provocative 7.Bg5 forcing Batchimeg to release the pin with h6 and g5.
Soon after, the convincing manner Tatiana handled the middlegame brought her a dream position and she could have finished things off on move 30, hadn’t been for the terrible time scramble… 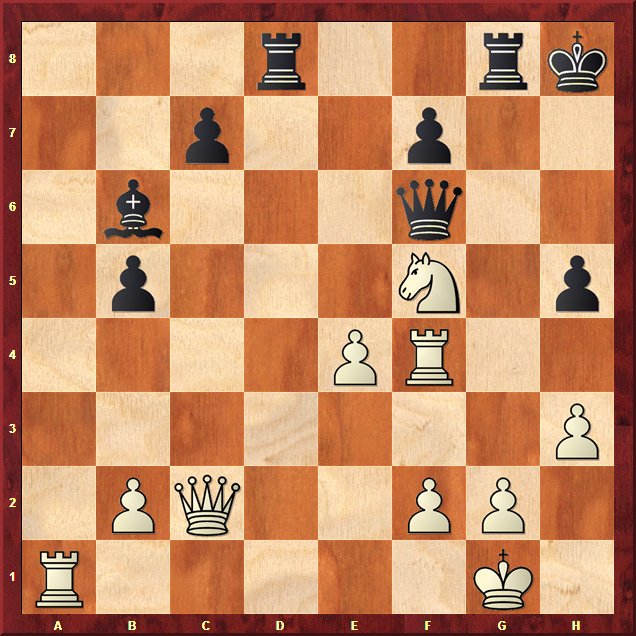 30.Qe2 would have brought Tatiana the desired present for her birthday, a full point, as scary 30…Qg5 doesn’t work because of the quiet 31.g3, followed by Rh4.
With seconds on the clock, the Russian started to go into the wrong direction with:
30.Rf3 and when the same idea came: 30…Qg5, it was again time for the timid pawn to move to g3…Tatiana chose for the natural but wrong:
31.Rg3 and after 31…Qd2 from Batchimeg, the Russian GM was not able to obtain another decisive moment in the subsequent endgame and a draw was agreed on move 57. 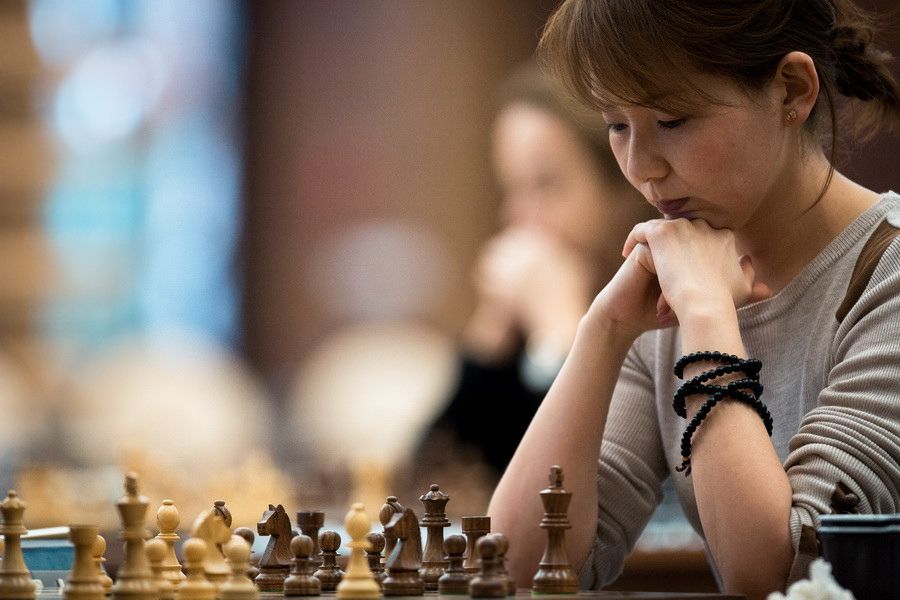 Although we could say that Tatiana is the moral winner of the game, Batchimeg’s contribution to her opponent’s mistakes is no less minimum. She defended a worse position, including the endgame and succeeded in the end to keep her head above the water – no more losses from now on!

In the battle between the two former women world champions, the character of the game took a classical turn, as the Tartakower variation of the Queen’s Gambit appeared on the board.
White chose a rare plan which allowed Black to roll his b-pawn with b6-b5-b4 (more usual is a2-a4 early on, to prevent this idea) and soon the expected Isolani emerged on the d-file. In a typical play for these type of positions, Black will tried to prove that this isolated pawn should feel rather lonely in the middle of the board, while White was fighting for this little pawn’s honour, which actually offers extra space and opportunities for attack. 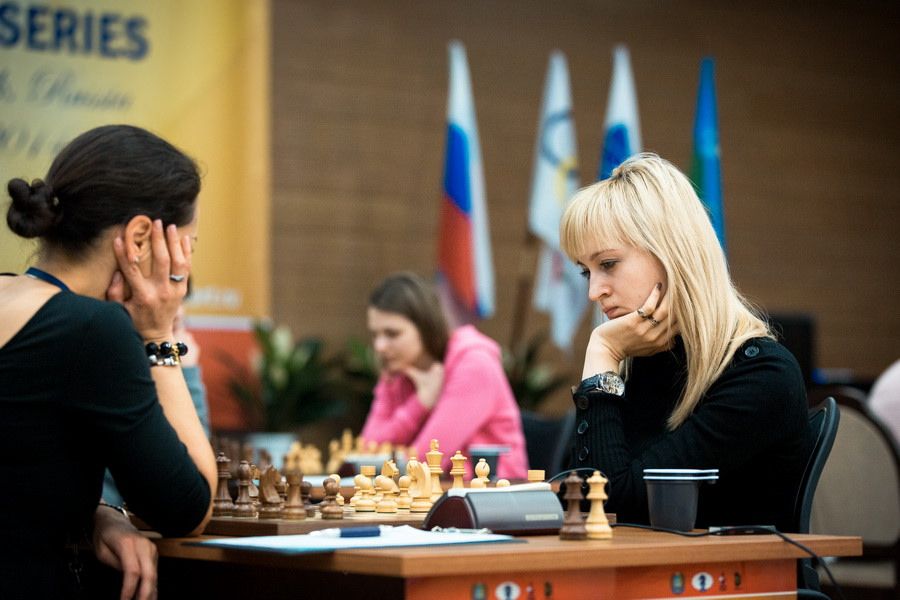 The game was complicated for a while but the ‘shy’ isolated pawn turns quite often into a deadly gun. Ushenina provoked the g6 weakness, increased the pressure and on move 26, with little time on the clock, Alexandra fell for the unfortunate: 26…Ndf4?! She probably missed the pin on the g1-a7 diagonal, which didn’t go unnoticed for her opponent, as she accurately answered: 27.Qe3 (the threat 28.d5 is in the air). But when the time had come to deliver, Ushenina didn’t continue precise enough: 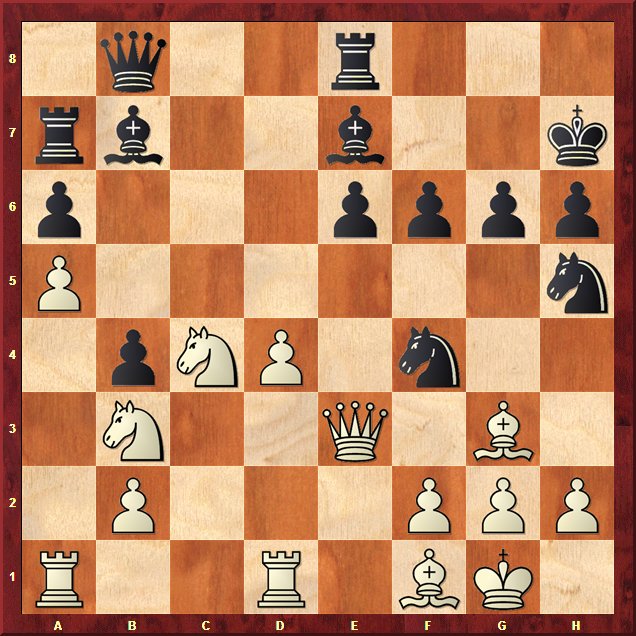 29.Bxf4 Nxf4 30.g3 wins immediately the e6 pawn and, most probably, the game.
The Ukrainian tried to save some time on the clock and opted for a natural looking move yet a bit more modest:
29.Rac1, which doesn’t spoil the advantage completely but the point seemed to move further away from the Ukrainian. 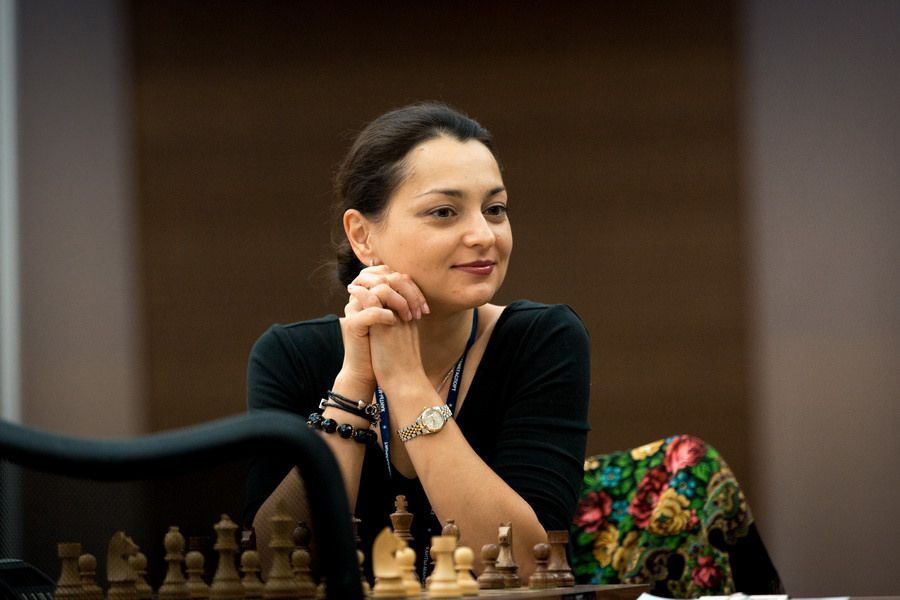 Time trouble helped a lot for the inaccuracies that appeared and soon after, Kosteniuk not only saved the day but even forced Ushenina to show some care and precise moves.
In the end, a draw had to be agreed as nothing was left to fight for in the subsequent endgame.

In the second classical Queen’s Gambit of today’s round, Olga went for the setup with 5.Bf4, to which the response of Nafisa was, further on, the 7…c6 setup, entering a bit of a cramped position. On the top level chess, the players invariably choose 7…Nh5, taking the strong bishop on f4 off the board, claiming that the line is fine for Black.

As a consequence, the advantage shifted slowly but surely in the skillful hands of the Russian player, who went on to increase her advantage starting with a beautiful and active series of moves: 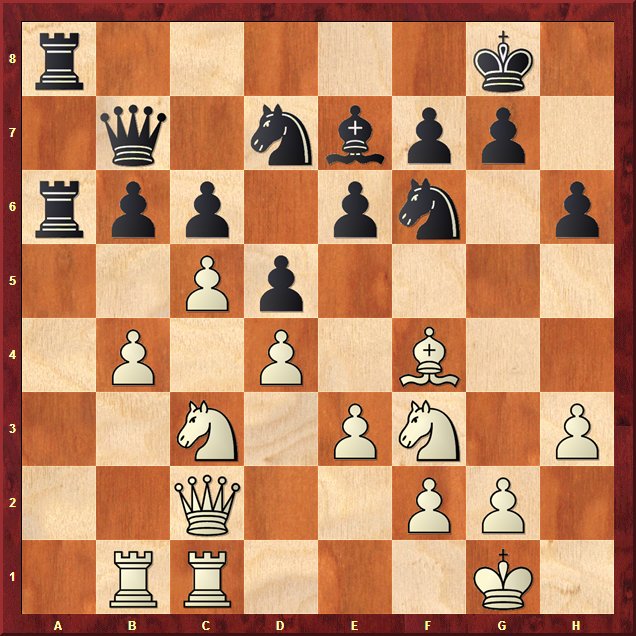 The Russian entered for the third time this tournament in time trouble, letting her advantage slip away…With under a minute left on the clock, Olga obviously didn’t feel like entering such complications: 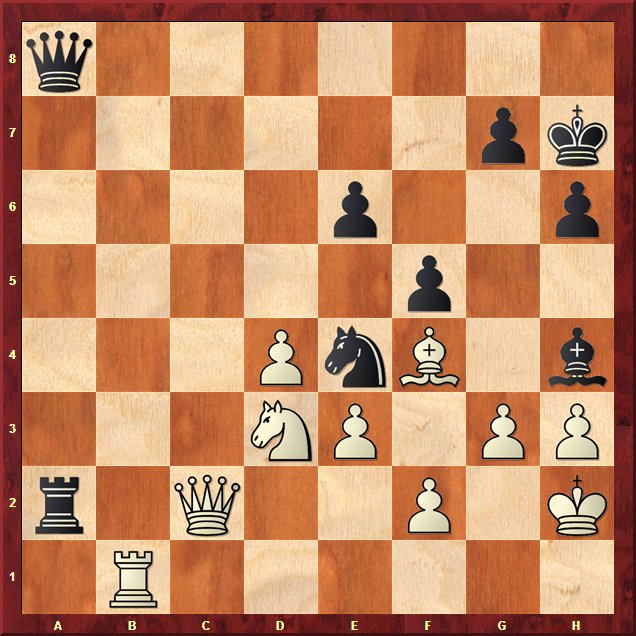 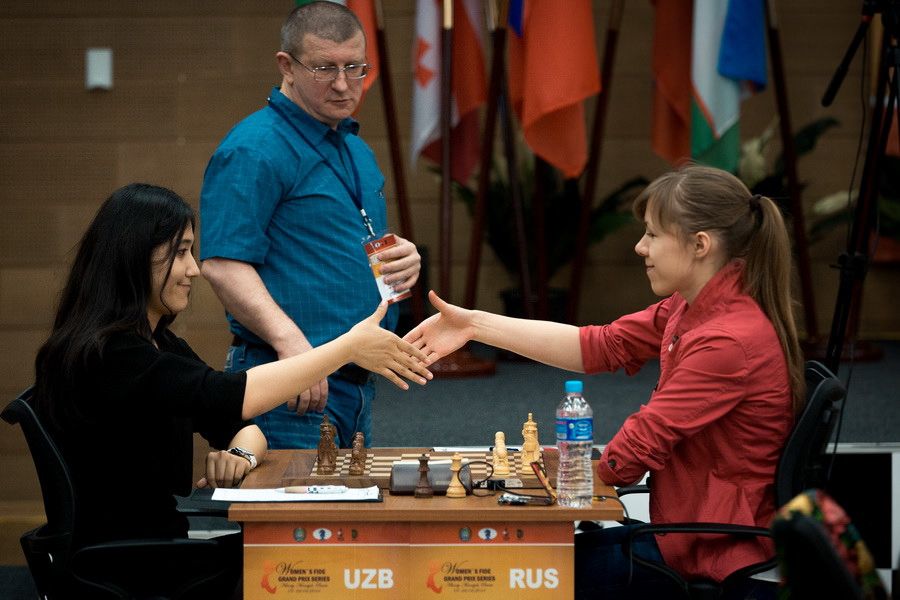 There is no surprise she decided to go for the practical approach instead of committing harakiri, so a draw was agreed by repetition just before the time control.
We should also mention the honourable play of the Uzbek WGM, as she is on 50% after today’s draw!

Returning to probabilities, the public’s and media’s attention will surely switch now to the world Champion’s evolution. For how long will Hou Yifan keep her perfect score? And who will be the first opponent to break her victorious string?