The first games of the FIDE Women Grand Prix stage started in Khanty-Mansiysk. The first move in the game between Chinese Hou Yifan and Russian Tatiana Kosintseva was made by the Head of Khanty-Mansiysk, President of Ugra Chess Federation Vasiliy Filipenko. Then the mayor of Ugra capital answered the questions of the journalists in the press-center.

- Then the first move appeared lucky for Viswanathan Anand. I hope this time my move would also bring luck to the world champion. Although obviously we route for Russians in this tournament. The impressions are of course very positive. It is great that Khanty-Mansiysk hosted the strongest women chess players of the world.

- Who of Russian players do you especially support in this tournament?

- Everyone at once. It is clear that I would especially fancy the victory of Olga Girya since she has Ugra origins, she’s our pupil. Of course it won’t be easy for her in such a competition but we always believe in her. 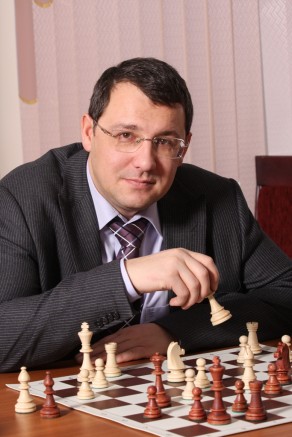 - At the end of 2012 Khanty-Mansiysk held Women’s World Chess Championship and almost immediately you have expressed the desire to hold two such serious tournaments as Women Grand Prix and World Women Rapid and Blitz Championships. Could be said that the first experience was successful and you decided to hold all the major women events at your native land?

In such situations we usually judge by the feedback from the participants, spectators, opinion of FIDE, and judging by the reviews, everybody was satisfied. That’s why we decided to continue. We presented the plan of our applications for the FIDE Presidential Board. Now we have all the major events scheduled  up to 2017. For instance, in 3 years Khanty-Mansiysk would hold World Team Championship – it is quite an interesting competition that would take place in Ugra for the first time.

- How did Khanty-Mansiysk manage to get such a reputation and trust in the chess world?

- A lot has been already said about it. Everything started in 2005 when we held the first World Cup. Then it was quite amazing for all the chess players – Khanty-Mansiysk, december, frost. Nevertheless everything was on the good level. After that, in preparation for the Olympiad, we held two more World Cups. Then the version that World Cup became the permanent resident of Khanty-Mansiysk appeared. With each passing year we only improved the level of organization. We try to make sure that the participants come to Ugra with pleasure. 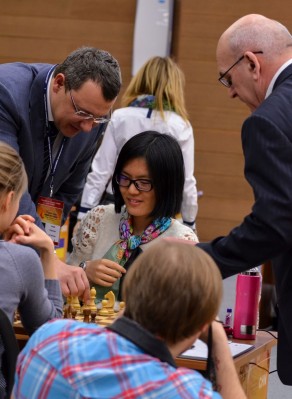 - Which other women competitions are held in Ugra, how cultivated is women sport here?

- A lot of sports are supported here, not only in Khanty-Mansiysk, but in the whole region – around 52 kinds of sports. There is no specific defference in the organization of competitions for men and women. If we talk about chess, then Ugra has many different competitions for women. We won’t deny that boys are coming to chess more willingly but we do have a lot of girls too, there are even rising stars.

- What would you organize for the spare time of the chess players at Ugra land?

- Often athletes have practially no time to rest. But we are always ready with the sightseening tours with the visits to cultural sites. Of course our town is not big, but undoubtedly there are things to see.

- Following the Candidates Tournament are there thoughts of holding the World championship match in the region’s capital?

- We are not thinking about it but we have quite a serious competitions schedule. City holds not only chess tournaments, there are many other cоmpetitions planned, that’s why we would contest for the right to hold the championship with big pleasure but I can’t promise anything. In 2015 we will hold Surdlimpiada, and again the final stage of biathlon World Cup will return to Ugra.