After the storm of decisive games from yesterday, the second round of the FIDE Women GP seemed to have taken slightly slower routes, at least in the beginning: more maneuvers, strategical struggles, cautious and prophylactic play. It was not that Black was trying to restore the balance, as the defenders of this colour were the winners of yesterday…

As the games progressed, it didn’t take long for the battles to take a complicated and sharp path, especially in the Russian derby Kosteniuk – Kosintseva and in the Lagno vs Girya encounter. Once again, the public was spoiled with ruthless struggles. Just like its ‘sister’, the 1st round, the 2nd one could not accept to take a back seat and delivered anew five decisive results and only one draw.

A very interesting, strategical yet sharp fight!
In a Paulsen/Taimanov Sicilian, White chose the classical system with 7.Be2, creating soon a serious theoretical discussion. Instead of the more common 13…Ne7, Girya chose 13…f5, which was played recently by Zhigalko but looks like the game started there since both players began to think long. 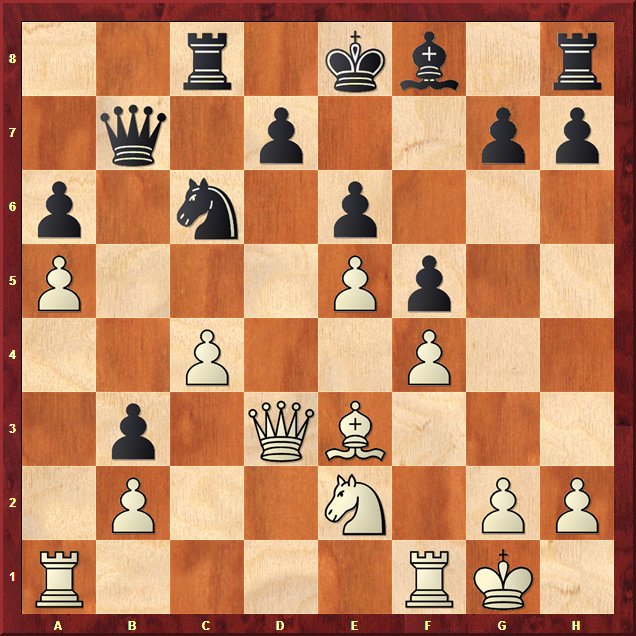 The time on both player’s clocks didn’t vanish in thin air though, there were many ways to continue the game, including the 18…g5! break, which is of course dangerous and maybe even double edged, but certainly a good way to fight for a point.

Olga chose instead the interesting pawn sacrifice (again!) by playing:
18…Nb4! Although during the press conference, Olga confessed she was not quite pleased with her game strategy, which she considered too risky, with an engine in front of our eyes it was easier for us in the press room to say that Black might had come on top, precisely thanks to this approach! The game continued:
19. Qxb3 Qe4 20. Nd4 and here the Russian continued very precise:
20…Nd3 21.Rf3 g5! Showing great understanding of dynamic play.

The Ukrainian had to solve her problems and stroke back with a nice exchange sacrifice: 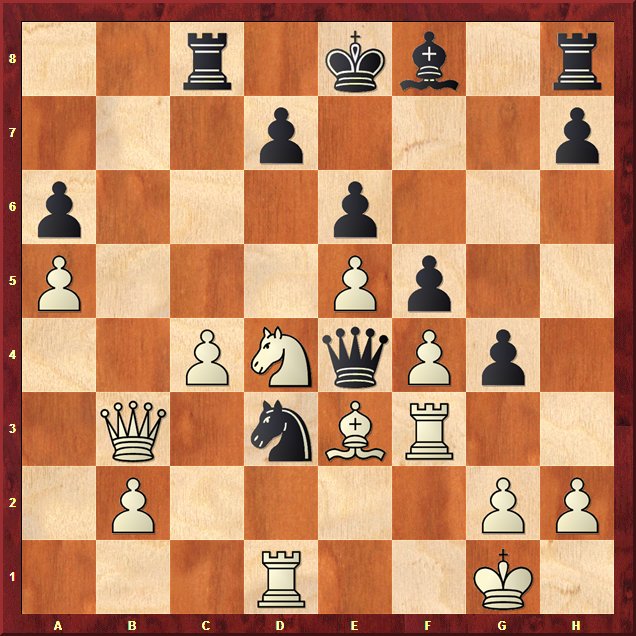 Her strategy soon paid off, as on move 25, instead of activating her rook with 25…Rg8+, Olga erred with: 25…Bc5 missing Lagno’s 26.Nxf5! The Ukrainian finished the game with the elegant: 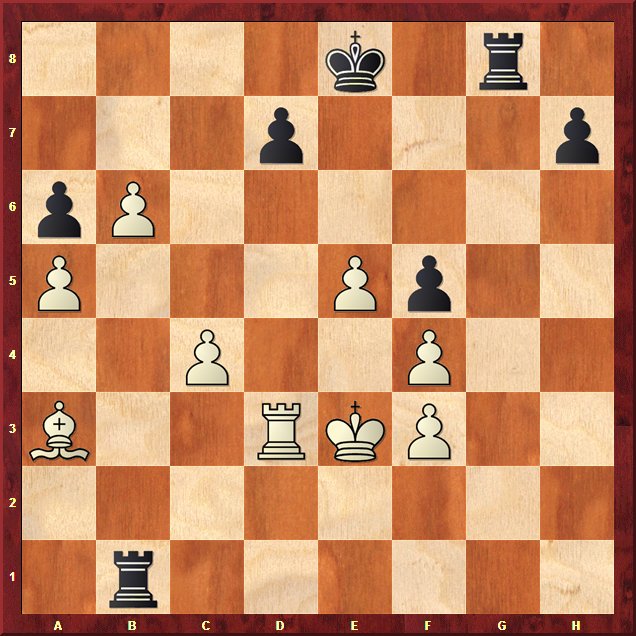 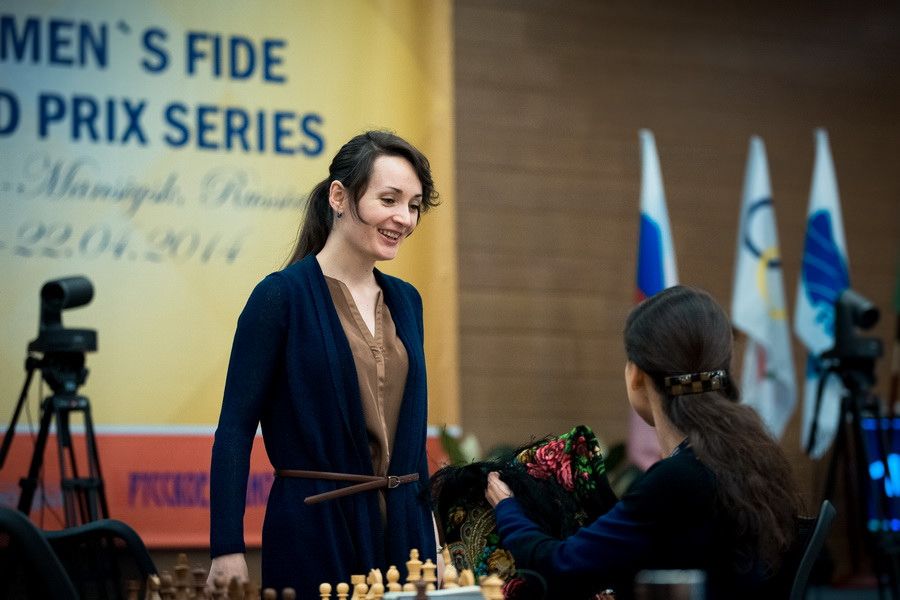 Hopefully for Kateryna this will bring her back in the tournament after a difficult 1st round.

The former women world champion surprised her compatriot in the opening, while Tatiana was trying to find her way out from the labyrinth of Italian theory, in a sharp Two Knights variation.
Playing the modern 9.h4 -an idea introduced by the Spanish GM Paco Vallejo a few years ago- it looked like Kosteniuk put Kosintseva in trouble, who sank into thought early in the game. 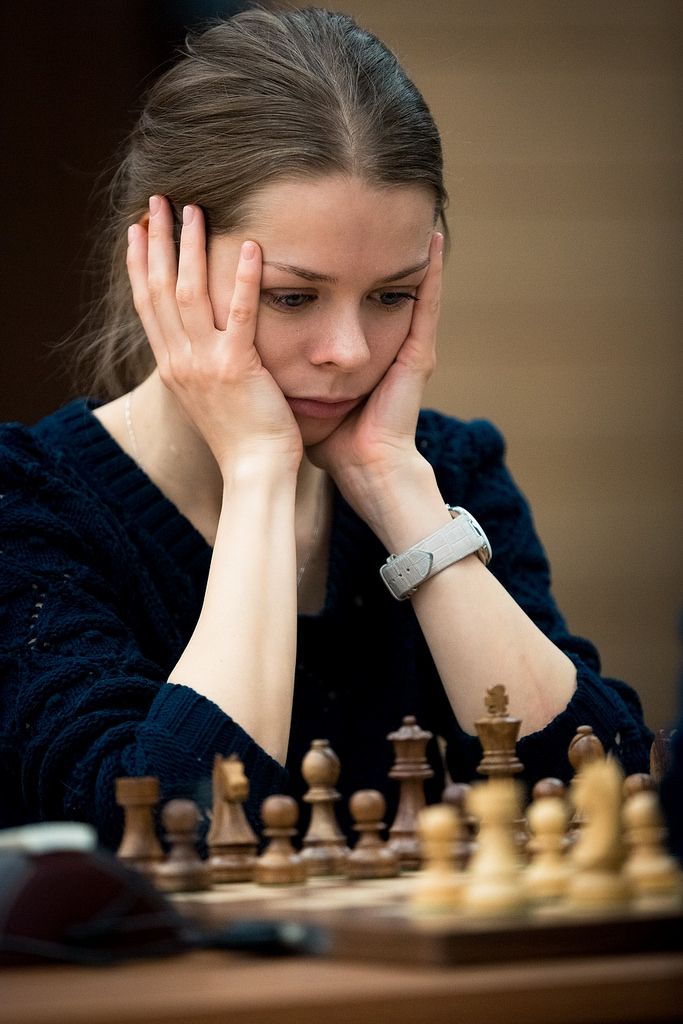 Black’s position was soon slightly worse; after 9…Nf4 White is already better due to the funny looking move, but also the strongest one, which was played by Kosteniuk: 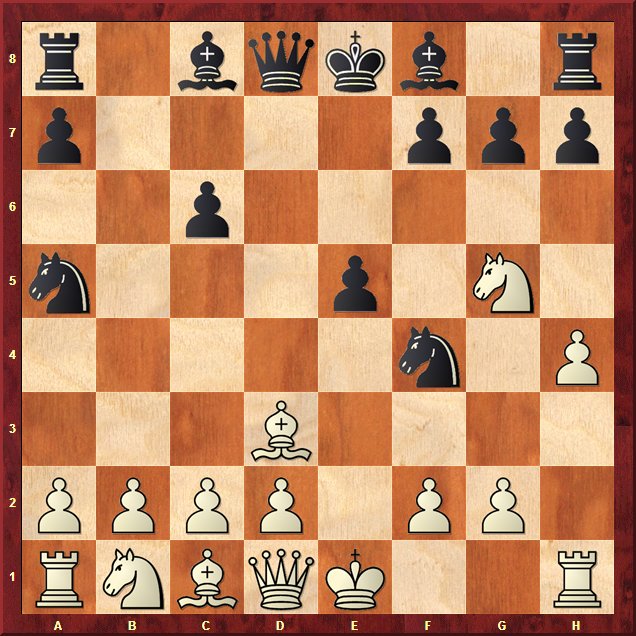 The question was if Kosteniuk will prove the pawn is more important than development, as her pieces were not coordinated yet.
Kosintseva’s compensation became more and more menacing as the game progressed. She skillfully maneuvered her pieces into promising positions and, in spite of the time trouble, coasted convincingly to victory.

In the big upset of today’s round, he Uzbek player employed the Ruy Lopez, the old fashioned Duras setup (d3 and c4). The modern approach is more popular these day, which combines d3 with c3. 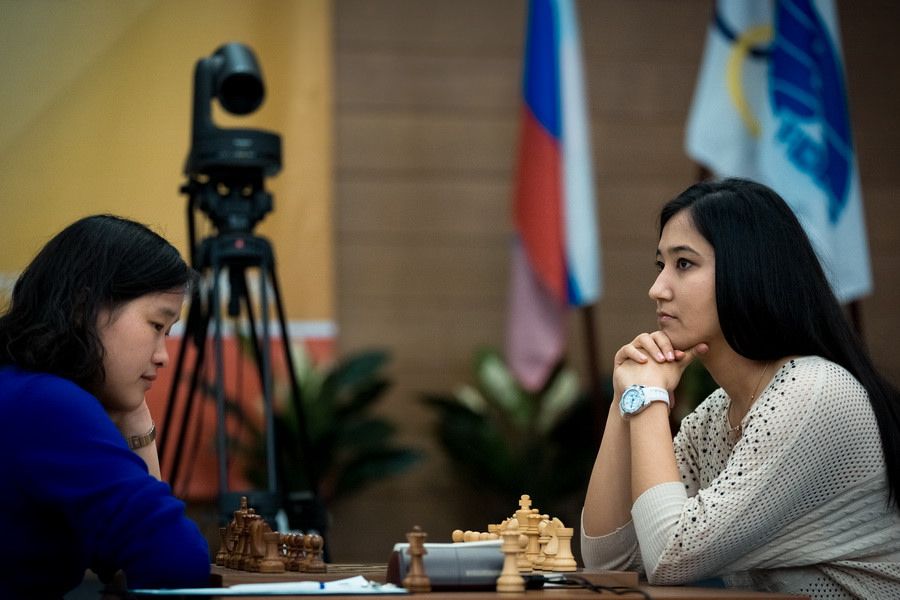 It looked natural for a while, up to the original 13th move, when Nafisa chose to retreat her bishop to the initial square: 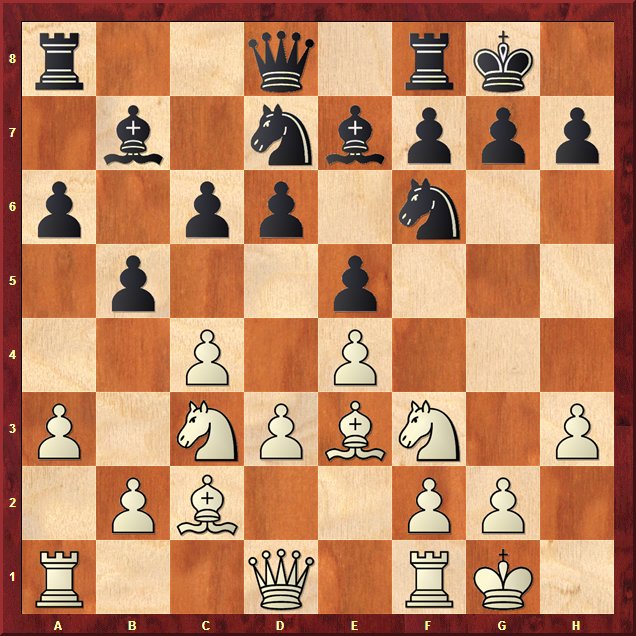 13.Bc1?! This move “shocked me”(Zhao), as it didn’t seem to fit the position well, but Black failed to punish it with an immediate 13…d5! In case of 14.b4 trying to justify the 13th move and make space for the bishop on b2, 14…d4 is very strong, followed by bxc4 and a better position for Black.

The cautious approach the Chinese chose instead, allowed White to relocate the bishop on the good square b2.
Just before the time control Muminova marked her advantage with the strong: 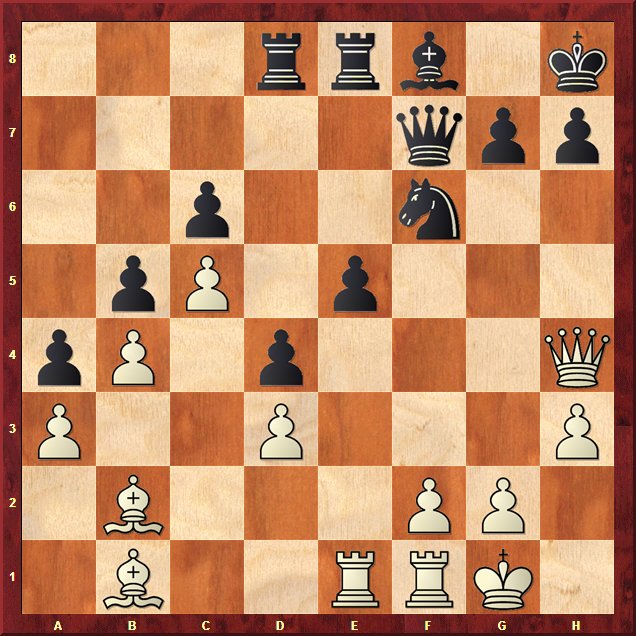 33.f4! which paved the way for her b2-bishop to rule the board and to even win the game!
In the end, the 13th move proved to be quite the opposite of bad luck and Nafisa further on didn’t fail to take what was hers: the point.

The Leningrad system against the Nimzo (“4.Bg5 is not very popular but still a main line” – Hou) didn’t go well for the Mongolian player as she soon found herself struggling under the reigning champion’s accurate play. 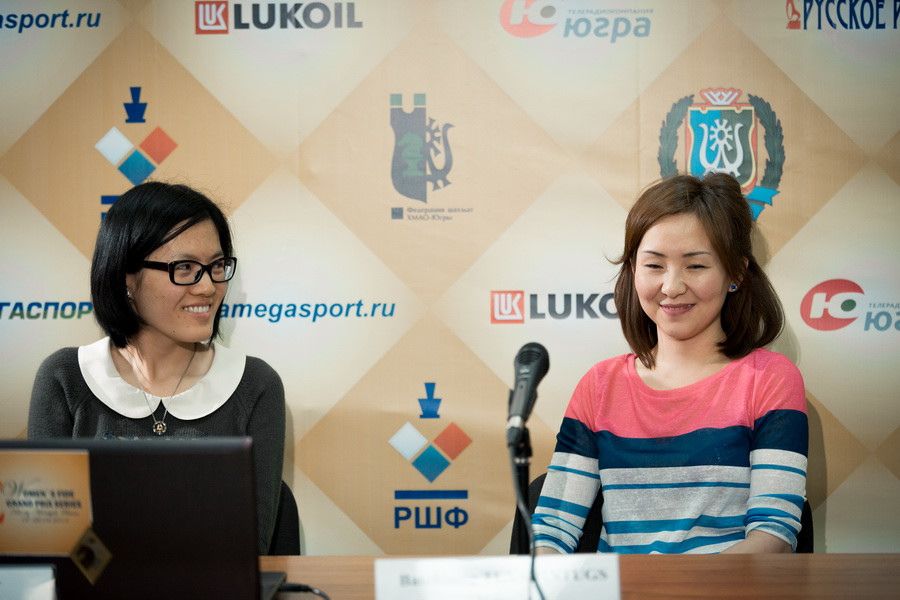 In the press conference the Chinese suggested the pawn sacrifice instead what Batchimeg played: 11.dxe6. And also later on she pointed out that perhaps her opponent should have decided upon a different continuation on move 13, to have castled when it was still possible, since after: 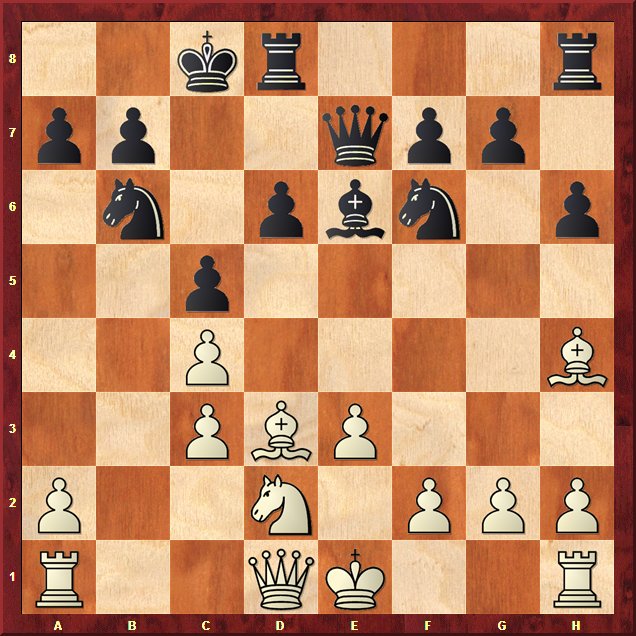 13.a4?! d5! Hou Yifan confidently seized the initiative through the center and went on to win the game on move 22.
A great start for the reigning woman champion who is leading with a perfect score.
As for the Mongolian player: 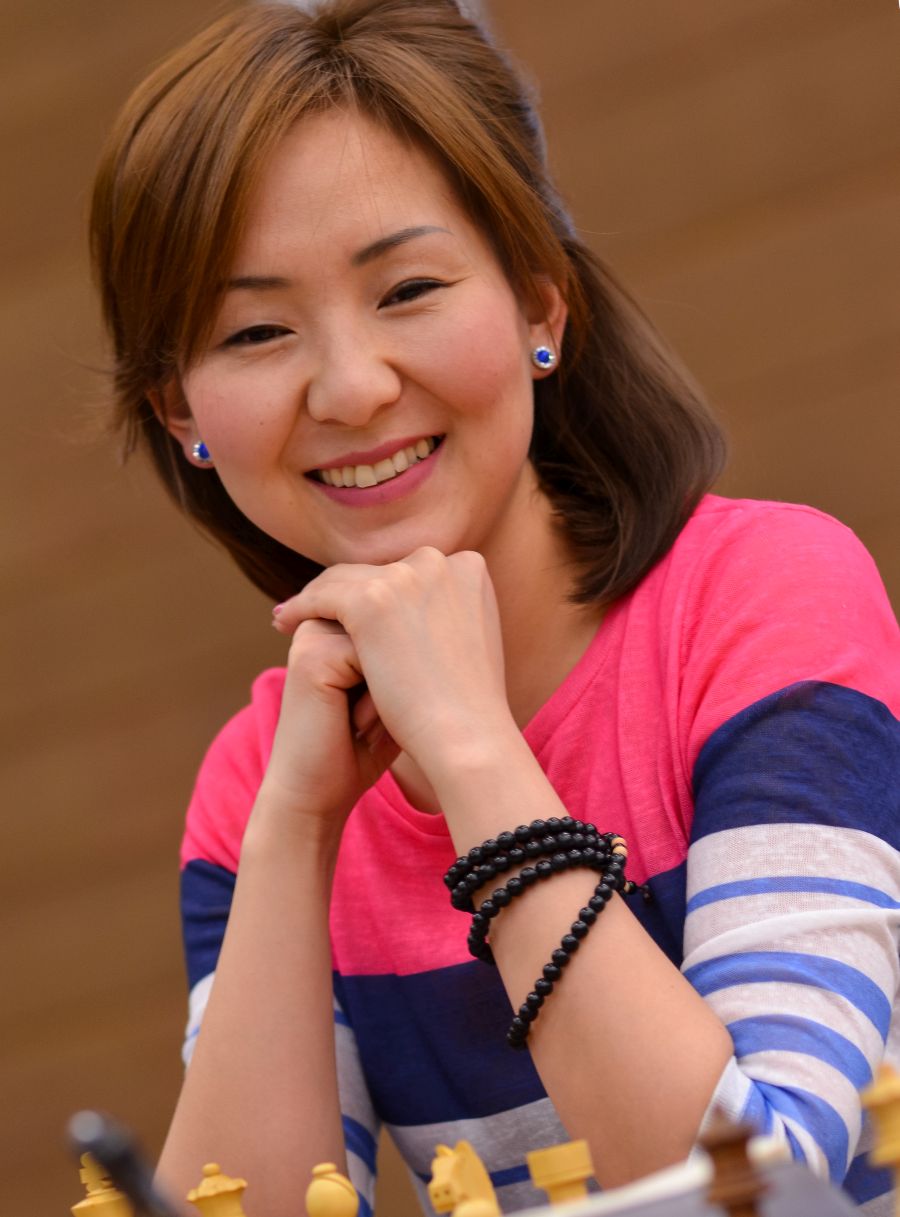 ”I hope I will do better and will fight back!”- Batchimeg said, keeping her warm smile, despite her losses in the first two rounds.

We wonder how Stefanova’s opponents are preparing against her inventive, creative and always somewhat different opening choice, especially if facing White; probably it is not an easy task, as Stefanova’s trademark is improvisation, as we already mentioned many times. 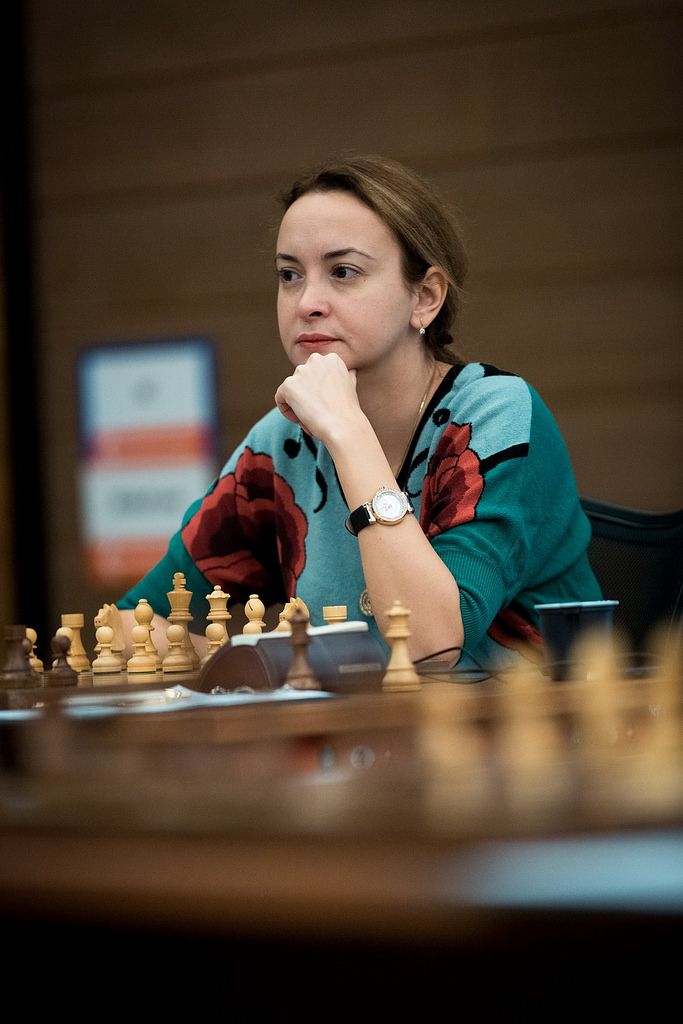 In today’s match between two former women world champions, the character of the opening play took a sinuous path, which makes it rather difficult to place it under a certain name. What started as a Reti move order, went on to become a hybrid between Catalan/Slav and advanced later on into a Caro Kann pawn structure, from the advance variation…it shows that on top level chess, one has to adapt to the task at hand like a chameleon.

The ingenious play gave Stefanova the upper hand in the middle game, as White had a clear target, to attack the enemy king; the only question remained whether Ushenina will manage to put up a fight by creating counterplay on the other side of the board. 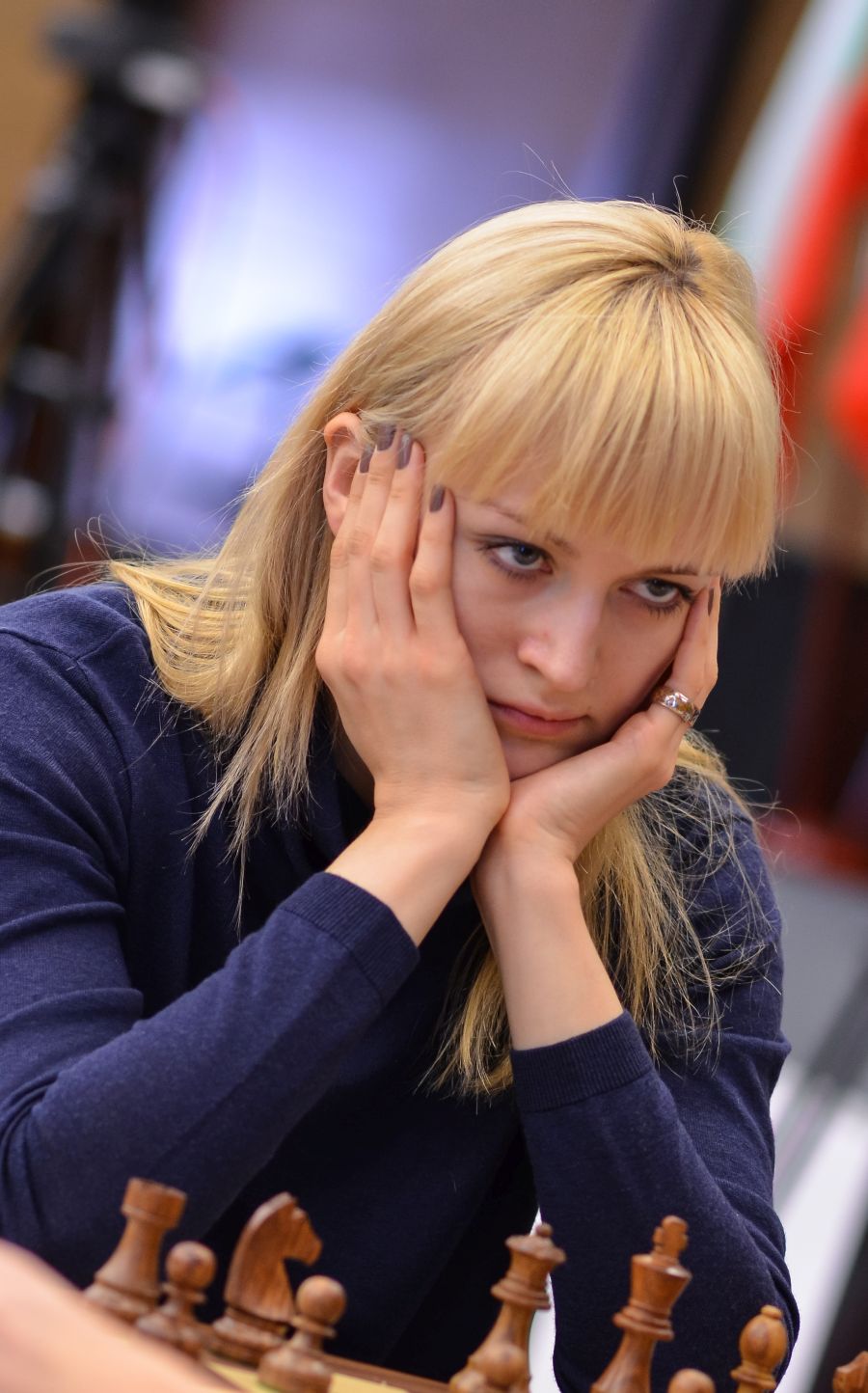 While trying to do so, the Ukrainian played the nice Bg4-f5-g6 maneuver, keeping her bishop on the board to protect the king side and she should have continued this policy with 23…h6, still keeping the minor piece (24.Nf4 Bh7!); but she went Nb6-d7-b6?! instead leaving White the upper hand.

The critical position was reached on move 35, when White pushed: 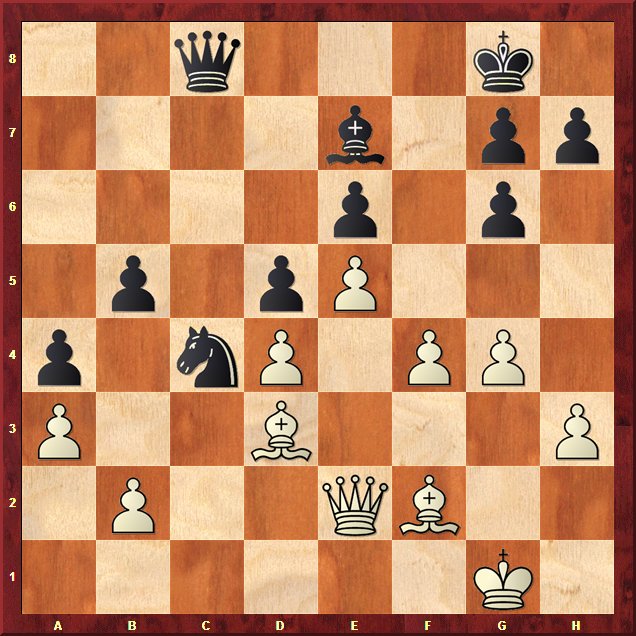 35.f5. Surprisingly, this can be met with the cool 35…gxf5 36.gxf5 and now: 36…exf5 should have been played, the point being 37.Qf3 Qc6! and nothing clear is apparent for White. For example 38.Qxf5 g6 followed by Nxb2. Instead Ana chose
36…b4 but the counterplay on the queen side never really materialized, the endgame went from bad to worse and after almost 6 hours of playing the Ukrainian had to admit defeat.

Muzychuk came well prepared in the Petrosian Variation of the Queen’s Indian or at least seemed that way. During the press conference though, she confessed 7.Qa4+ took her by surprise, to which Dzagnidze replied “Well, after your 7…Nd7 I just couldn’t remember my lines!” 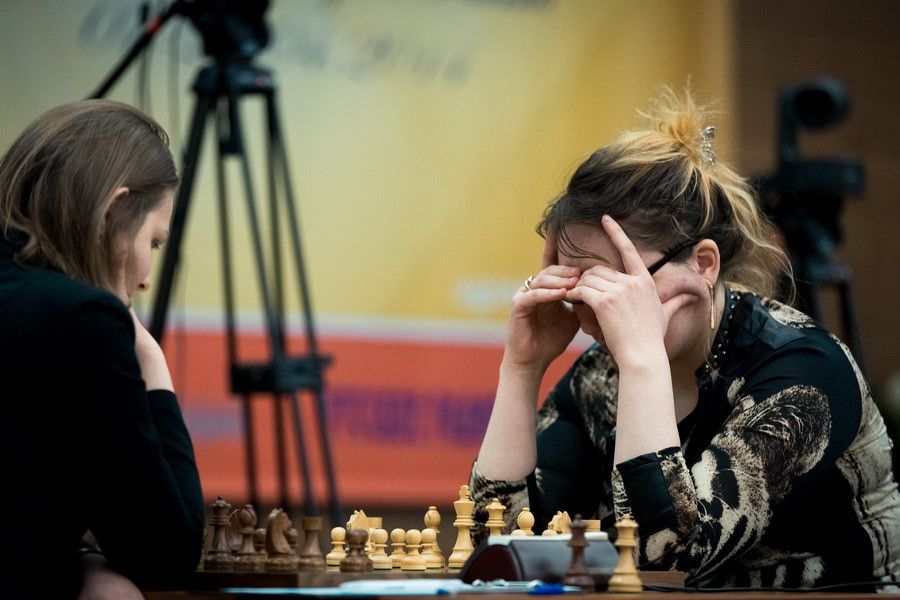 Playing the opening fast and confidently Muzychuk easily equalized as Black and Dzagnidze saw herself forced to enter a slightly worse endgame. After 13…c5 and 15…e5 Muzychuk is already fighting for more, blowing up White’s center. 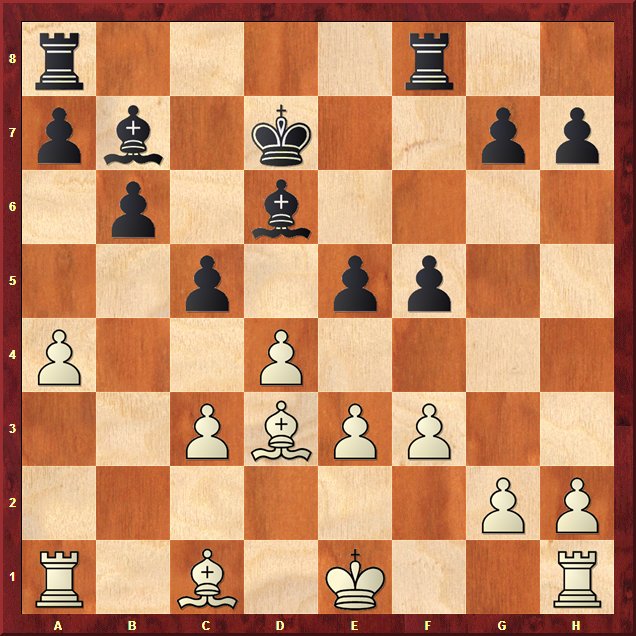 Although Black’s position was preferable, it proved not enough for more than a draw, which was agreed on move 30. Maybe a possible way to continue the game and hope for more was: 24…Rde8, as mentioned by the players during the press conference, keeping both rooks on the board. Muzychuk took on d1 instead: 24…Rxd1 and, although White has the ‘bad’ bishop, the players called it a day, agreeing there was not enough room left for play.

After having been spoiled by such spectacular and fierceful rounds, we cannot hope for less for tomorrow. But we would also understand if some of the ladies would slow down a little bit.