We enter the second half of the FIDE Women GP with the same leader: Hou Yifan, who keeps the one point distance from the second place, after drawing with Black against Antoaneta Stefanova. In her shadow, just like yesterday, follows Anna Muzychuk, who drew the second Anna from the tournament: Ushenina.

On the heels of second place jumped Alexandra Kosteniuk, who won her game against Nana Dzagnidze, being now the collector of 3.5 points, just like her compatriot, Olga Girya, who won against Zhao Xue.

Trailing on three points are: Kateryna Lagno, Zhao Xue, Antoaneta Stefanova and Anna Ushenina. On an honourable 2.5 is Nafisa Muminova after a convincing win against Tatiana Kosintseva, as well as Nana Dzagnidze, who lost her game against Alexandra Kosteniuk.

With the hope to do better in the upcoming rounds are: Tatiana Kosintseva on two points and Batchimeg Tuvshintugs, who broke her unfortunate series and drew against Kateryna Lagno. 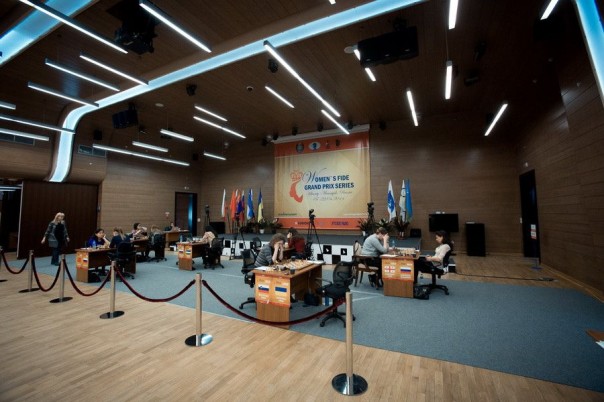 One of them, as unpleasant as it may seem in a chess tournament, could also be regarded positively. At some point one of the spectators was absorbed by the surrounding atmosphere of the round to the extent that he was calculating and suggesting moves and variations in loud voice. He was immediately evacuated from the playing area, but we could indirectly be glad that chess can sometimes raise a type of enthusiasm which is typical for a football stadium…

The second incident is also double-faceted. From outside, it looked pleasantly diverting, but for its protagonist, Zhao Xue, it caused an internal tragedy…

The game started after an amusing moment, at least for the spectators. On her arrival, Zhao Xue sat down in front of… Anna Muzychuk! Was this provoked by over-focusing or rather by stage fright, this didn’t seem important. The main question was whether Zhao Xue had prepared against the… right opponent, which was Olga Girya today, and certainly not Muzychuk. 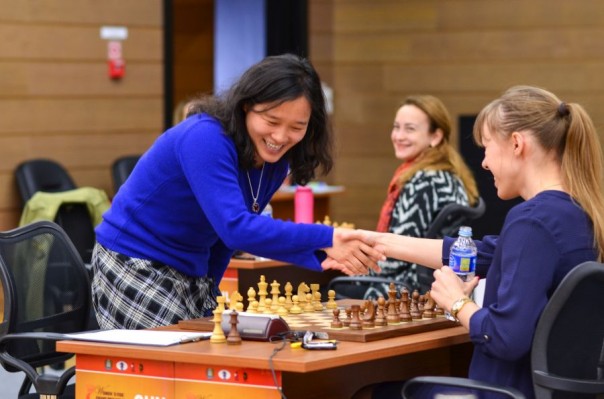 The truth came out at the press conference when Zhao Xue confessed that she had mixed up everything with preparation: not only the opponent, but the colour, too! She added that the shock was so strong that she couldn’t recover properly. 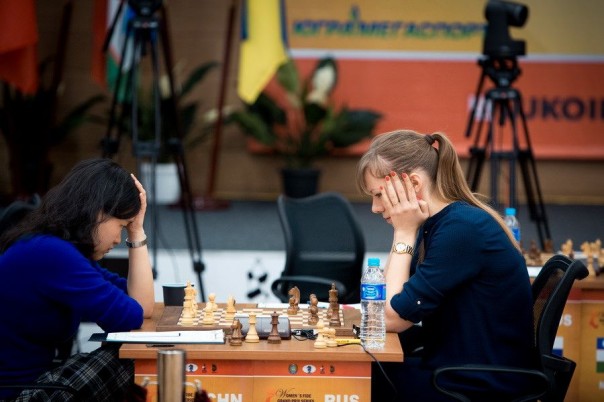 The game didn’t go her way, either. Girya’s: 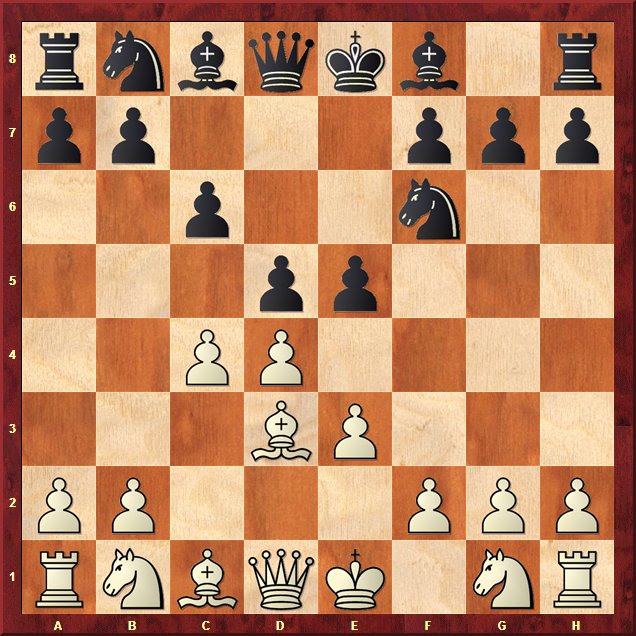 4…e5 is reported to be a refutation of White’s setup (for instance, Caruana’s faced it against Karjakin, after which he played it with Black, too!) and the rare 6.exf6 only made things worse for White. Girya went on increasing her advantage confidently and, much to the spectators’ delight, forced her opponent’s resignation in a double-queen ending, something not very common in practice. 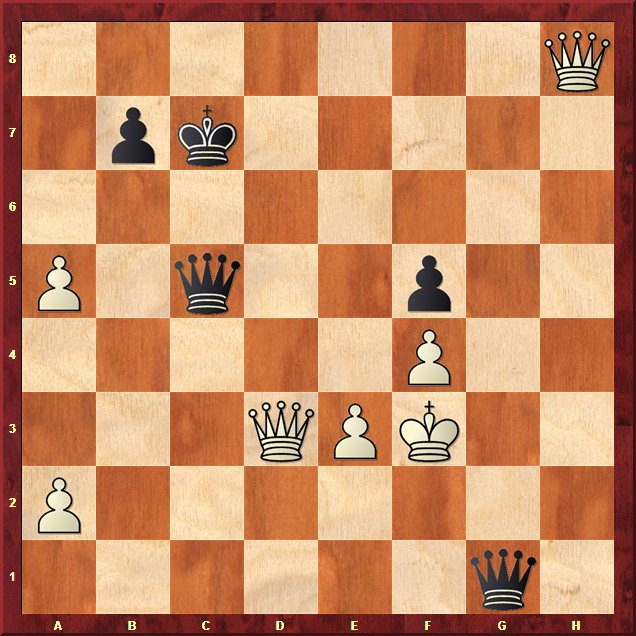 The Uzbek player played an excellent, sharp Scheveningen Sicilian variation today against Tatiana Kosintseva, which brought her an important victory! From outside (and for the players either, as revealed during the press conference), it was not clear  where and when precisely did things go wrong for Black; perhaps 11…Nxd4 was premature. Later on it became more and more difficult for the Russian GM to find all the best and, by no means easy, defensive moves… after the very strong: 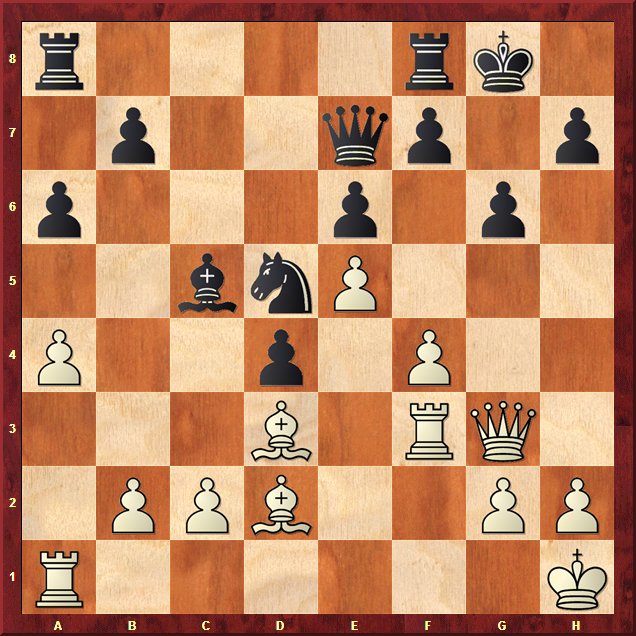 23.f5! from Nafisa, followed by 25.Rxf5! nothing could be saved from fire anymore and Tatiana soon resigned. 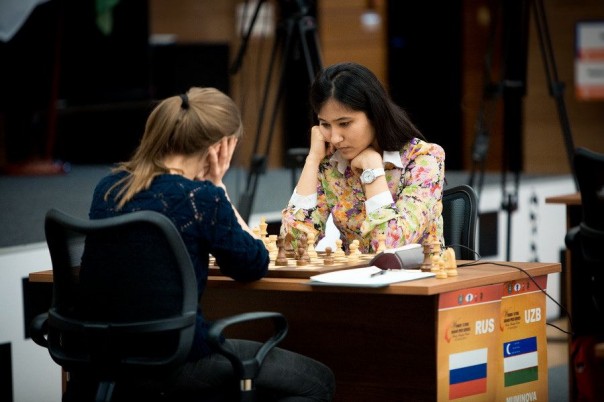 The beautiful execution reminds the public of the same deadly break of Hou Yifan against Dzagnidze!

Judging by the opening played, we could easily believe that colours were actually reversed. Hou Yifan played the Owen opening (something she had done twice so far, but only against 1.c4), which is held to be rather experimental, thus seeming to rather suit Stefanova’s style! But the systematic way Black undermined the white center and the ensuing dynamic compensation for the pawn weakness suggests that Hou Yifan had analyzed the position thoroughly, rather than improvising over the board. We can also appreciate the width of the World Champion’s preparation, as well as her constant aim to put pressure on her opponents. 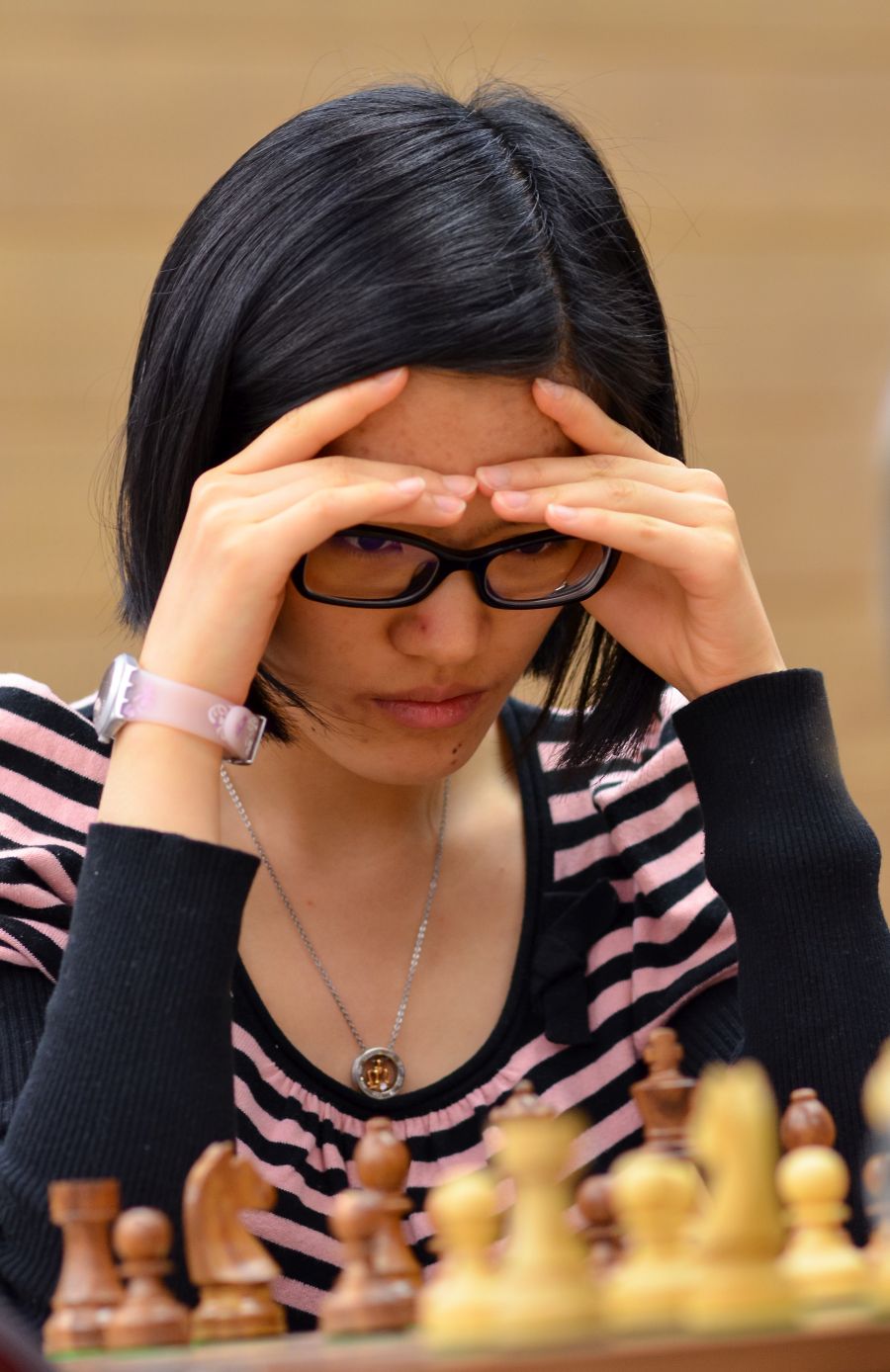 By move 34, all the pieces were exchanged and White got an isolated pawn on the d-file, too, thus leveling the structural situation. But even in the pawn ending Hou Yifan kept putting some pressure, forcing her opponent to resort to a few only moves: 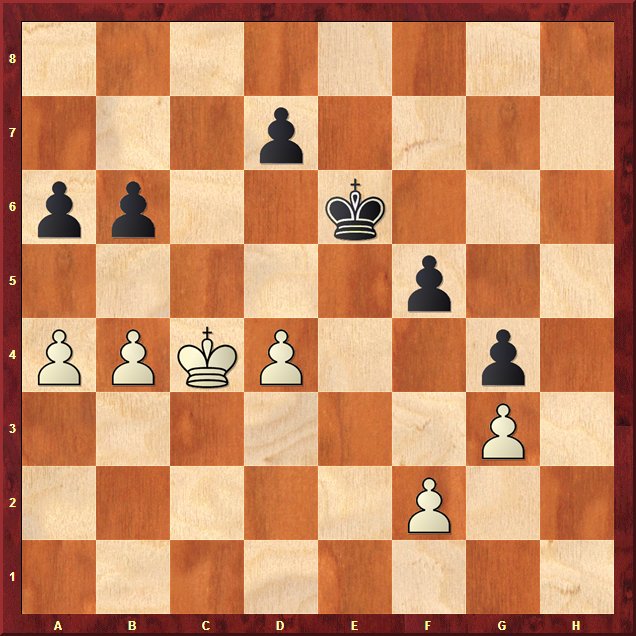 For instance 41.a5 (is the only move that holds) right after the first control tension, or slightly later 43.d5, to maintain equality. 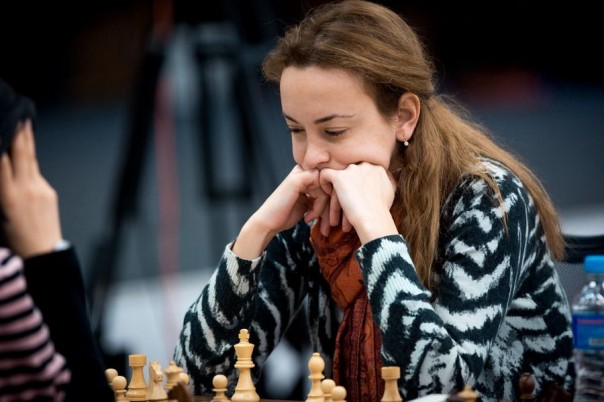 The game ended in a draw only when there was not even one trace of tension left: the relatively popular lately king versus king ending…

Dzagnidze played the Paulsen-Kann Sicilian, eventually leading to a known Hedgehog tabyia. Her choice seemed to match the yesterday’s approach, when she had offered to her opponent all the space she wanted, just to bounce back at the right moment. Today, after the initial regrouping maneuvering, Nana played the rare (but not really uncommon as a general idea): 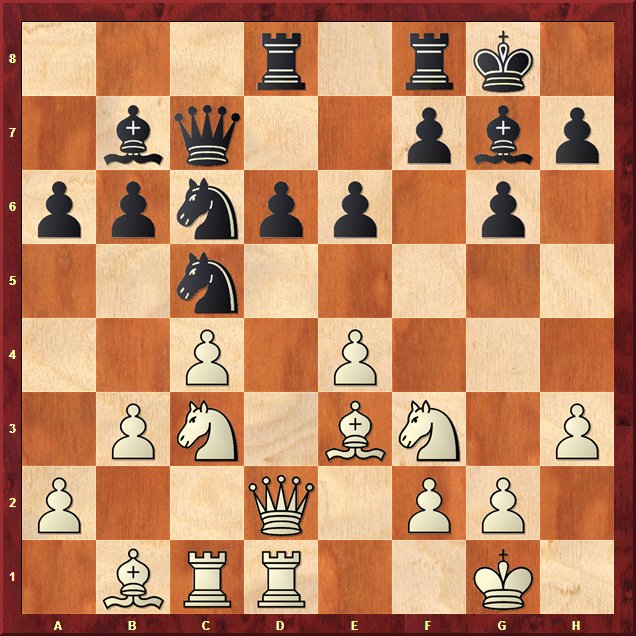 17…f5, which suddenly placed her on the side heading for space. Due to White’s harmonious mobilization, weakening the e6-pawn looked risky, but during the post-mortem Aleksandra confessed that she didn’t like her position at that point. 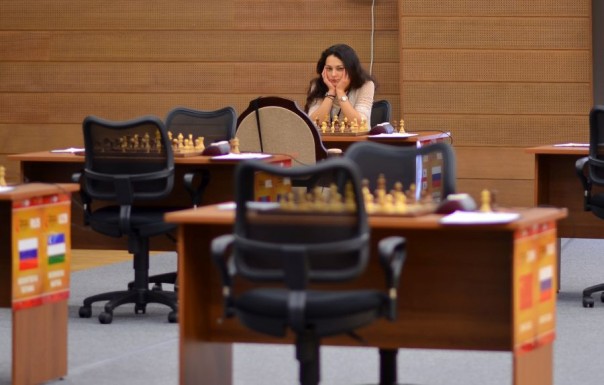 A very disciplined Alexandra Kosteniuk, who always arrives amongst first in the playing hall

The game had a slightly fluctuating course with some white pressure but reasonable chances for Black.

At the culminating moment the uninvited guest, the mutual time trouble, caused the players throwing the point from one to the other… 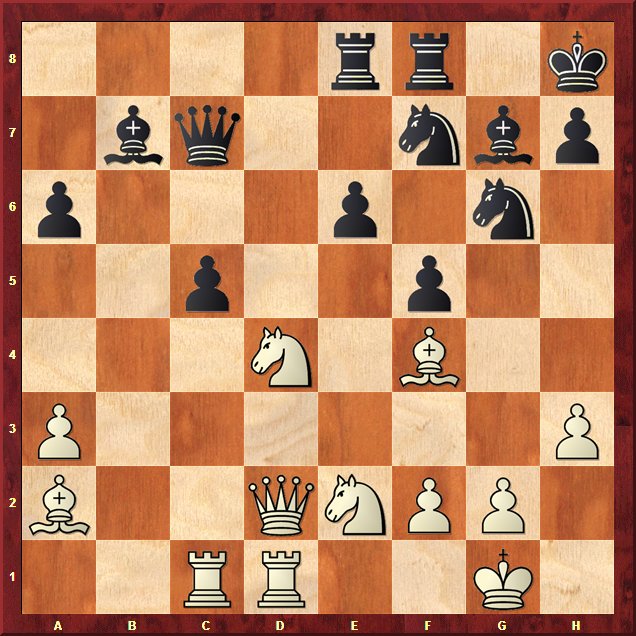 After the unfortunate 28.Bf4? the Georgian could have profited to the maximum and maybe even won the game, had she played 28…e5! where after 29.Bh2 Bh6 comes… the moment slipped away and as soon as the next move came, the table turned and suddenly Kosteniuk was in the lead. 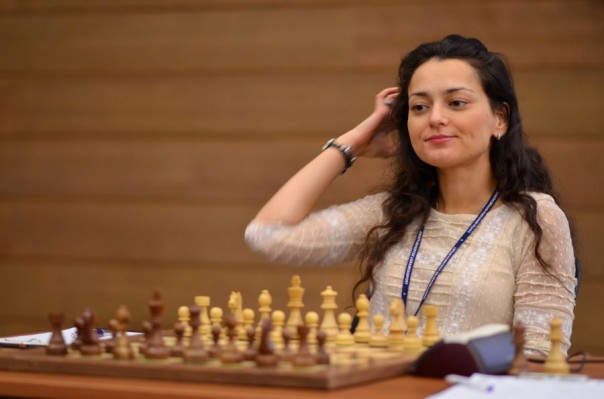 In such cases, the player who commits the penultimate mistake wins… And as this was the last twist in the evaluation of the position, Kosteniuk confidently claimed the full point.

A difficult game for the Mongolian player, not only due to her position in the standings but mostly psychologically. In round-robin events, the chess players tend to metamorphose into ruthless sportsmen, fighting up to the last gasp if necessary, against those considered to be out of shape or simply on a low score. As a consequence, the pressure on the player who’s position is less comfortable in the standings, is even higher, this having a good deal to say in the unsatisfactory Batchimeg’s result so far. 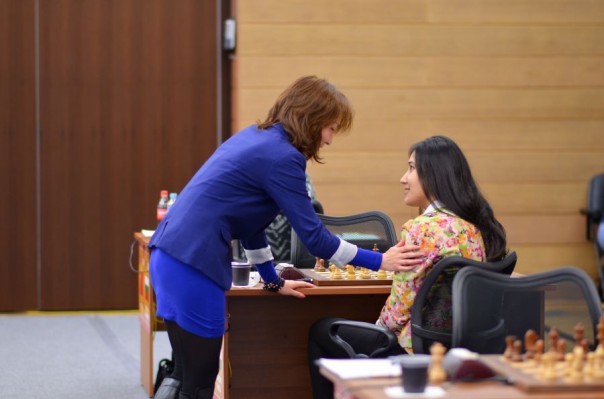 The English went fine for the Ukrainian, who was not shy to grasp the advantage and to apply more and more pressure on Black. She had an interesting idea by playing: 16.b5!? where if 16…cxb5 17.Qxb5 there is big pressure in the endgame.

Kateryna chose instead to chase the queen away with 16.Nc4, which perhaps gave her even more practical chances as she soon could have taken a pawn with: 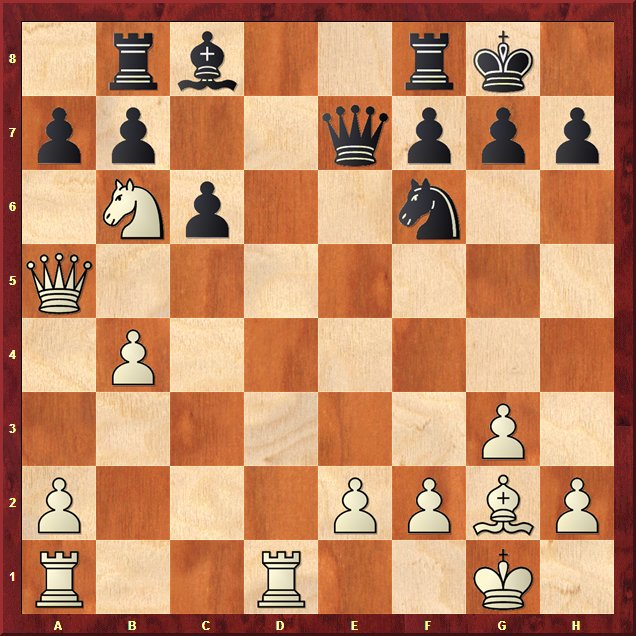 19.Qxa7; perhaps she was afraid of 19…Bg4, feeling that her pieces would be too far away from the king, in some sort of isolation on the opposite side of the board. 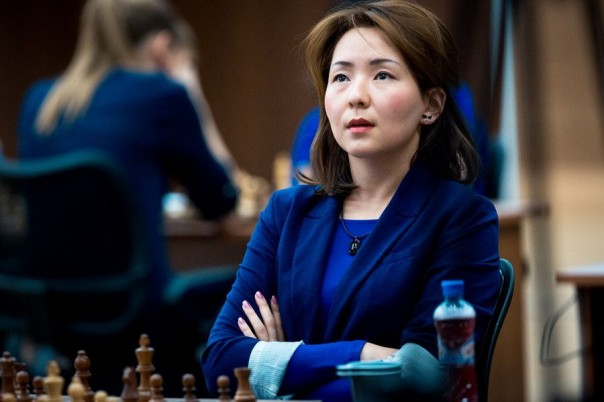 The Mongolian broke the spell

The more cautious move 19.Nxc8 came, giving Black chances to fight back and hope  for rescue. The game simplified in a rook ending with an extra pawn for White. Determined to break the less favourable series, Batchimeg defended accurately and the maximum Lagno could achieve was… stalemating her!

The wrestling between the two Anna-s followed in the footsteps of Kramnik vs Kasparov 2000 World Championship match, and further on it seemed to copy the Hungarian GM’s repertoire, Berkes. 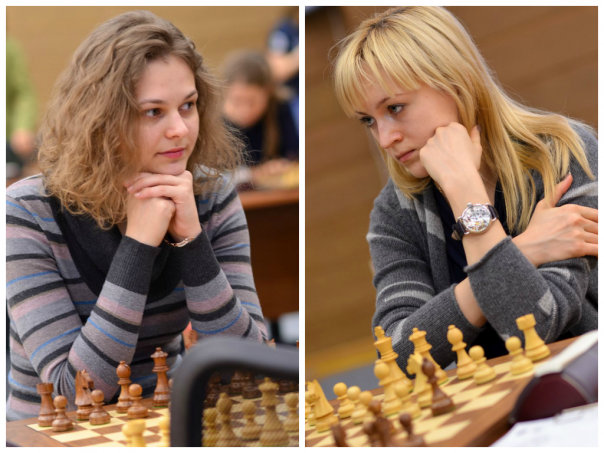 Soon Anna’s strategy, the one which still plays for Ukraine, worked wonders for this typical Nimzo’s line: the pawn sacrifice was just a temporary one, getting in return a good deal of space and ideas for attack. 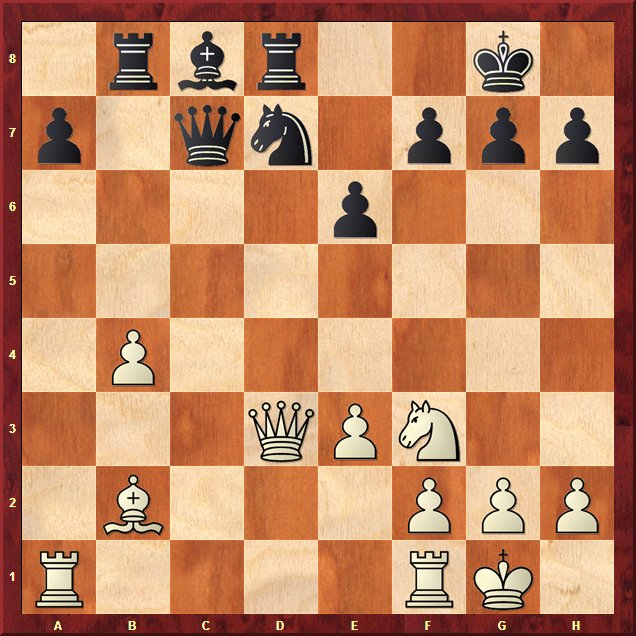 Perhaps Ushenina’s concrete but natural 18.Qd4 was not the most precise way to question her opponent’s defense, giving Black some time to breath and regroup.

Instead, 18.Rfc1 Qb6 19.Qd4!? would have been interesting. This looks paradoxical in a position where common sense would dictate keeping the queens for the attack; here though it is justified by the weak a7 pawn and excellent coordination of White’s pieces; in case Black responds: 19…Qxd4, then 20.Nxd4 and Black cannot take the b4-pawn because of 21.Nc6 with huge pressure.

In the game, Anna Ushenina obtained some rather symbolic advantage and tortured her opponent for a few dozens moves, but it all ended up peacefully. 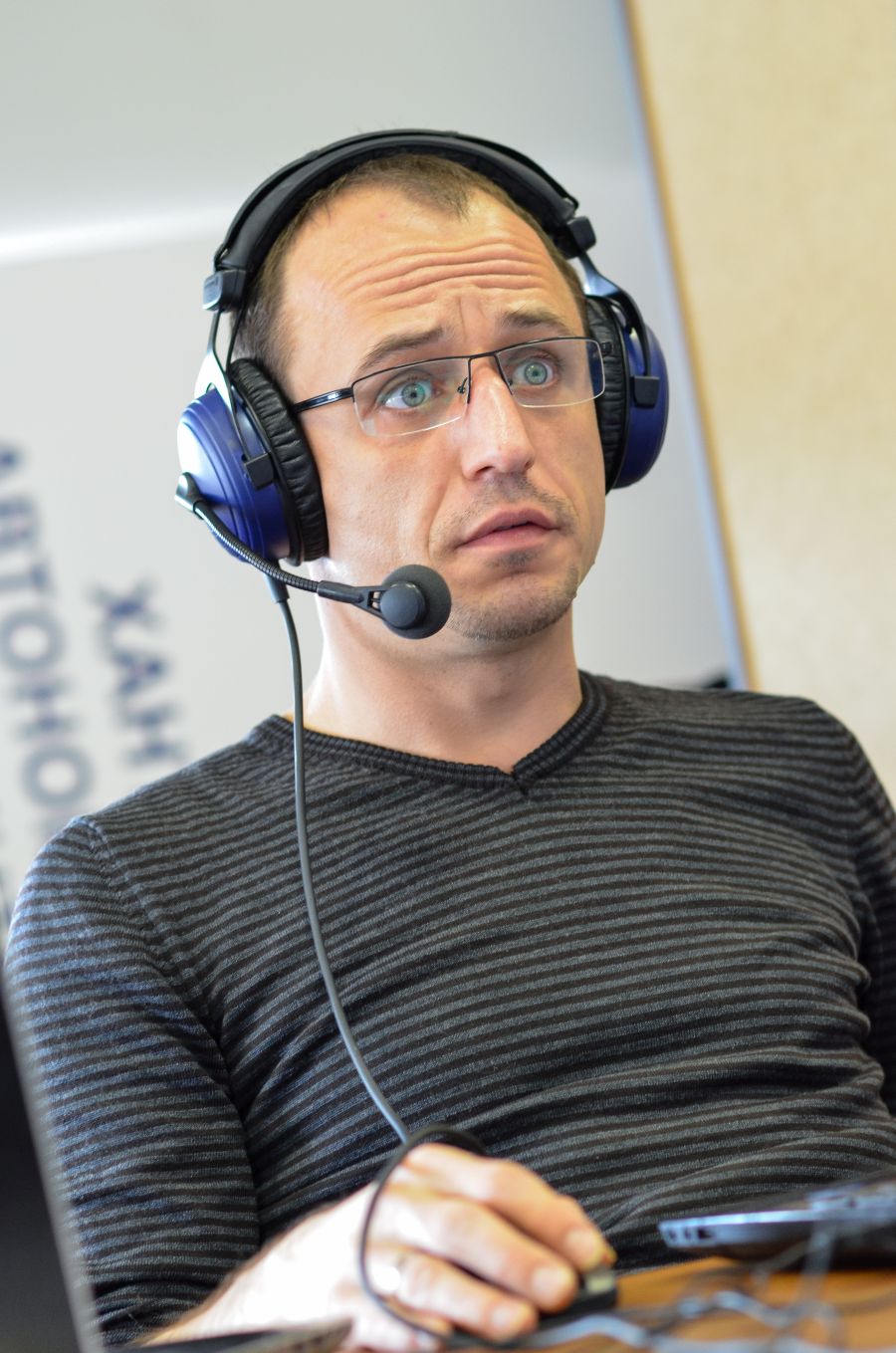 Our commentator, Evgenij Miroshnichenko,  at work; we are sure our readers will find much more creative captions…

One thought on “Round six drama”