The FIDE Women GP from Khanty Mansiysk came to an end, delivering two big announcements: it is official – the Chinese chess wall remained intact, as even the former women world champion, Alexandra Kosteniuk, didn’t succeed to discover its weak spot. After a fierce struggle, Hou Yifan hold her position and triumphed in the tournament with 8.5/11, 1.5 points ahead of second place! Congratulations for such a confident victory! 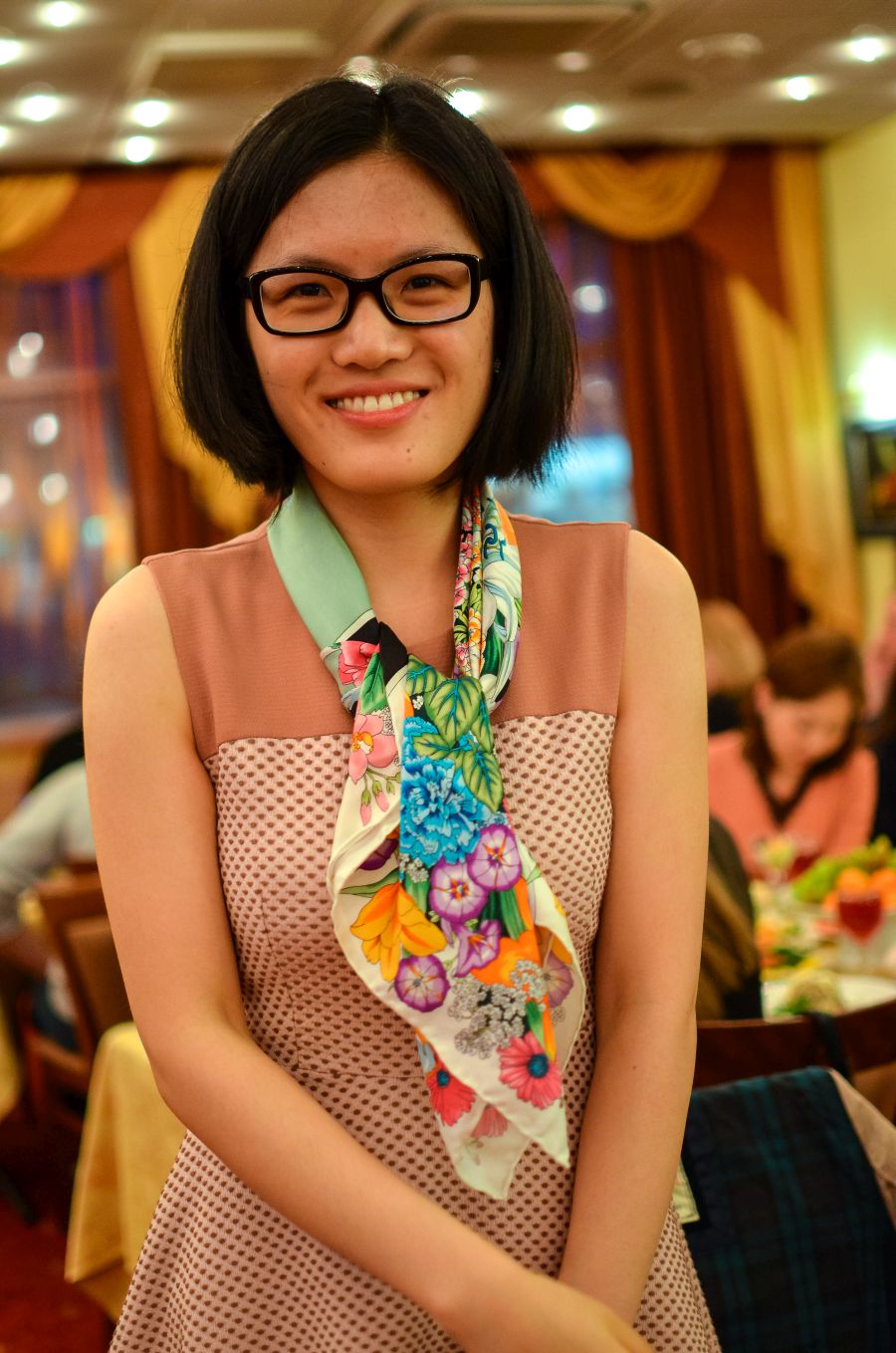 The very strong yet very kind lady – Hou Yifan; and – the winner of the tournament, of course!

If the chess world was somehow ready to agree that Hou Yifan’s result would be predictable, the star of the event is, undoubtedly, the local Russian hero: Olga Girya! Not only she came unshared second, with 7/11, after succeeding to ferociously defend today against Batchimeg Tuvshintugs, but also she scored a GM norm and kept in her native country a big bunch of rating points! All the fans of Olga would like to congratulate her for the fabulous performance – well done! 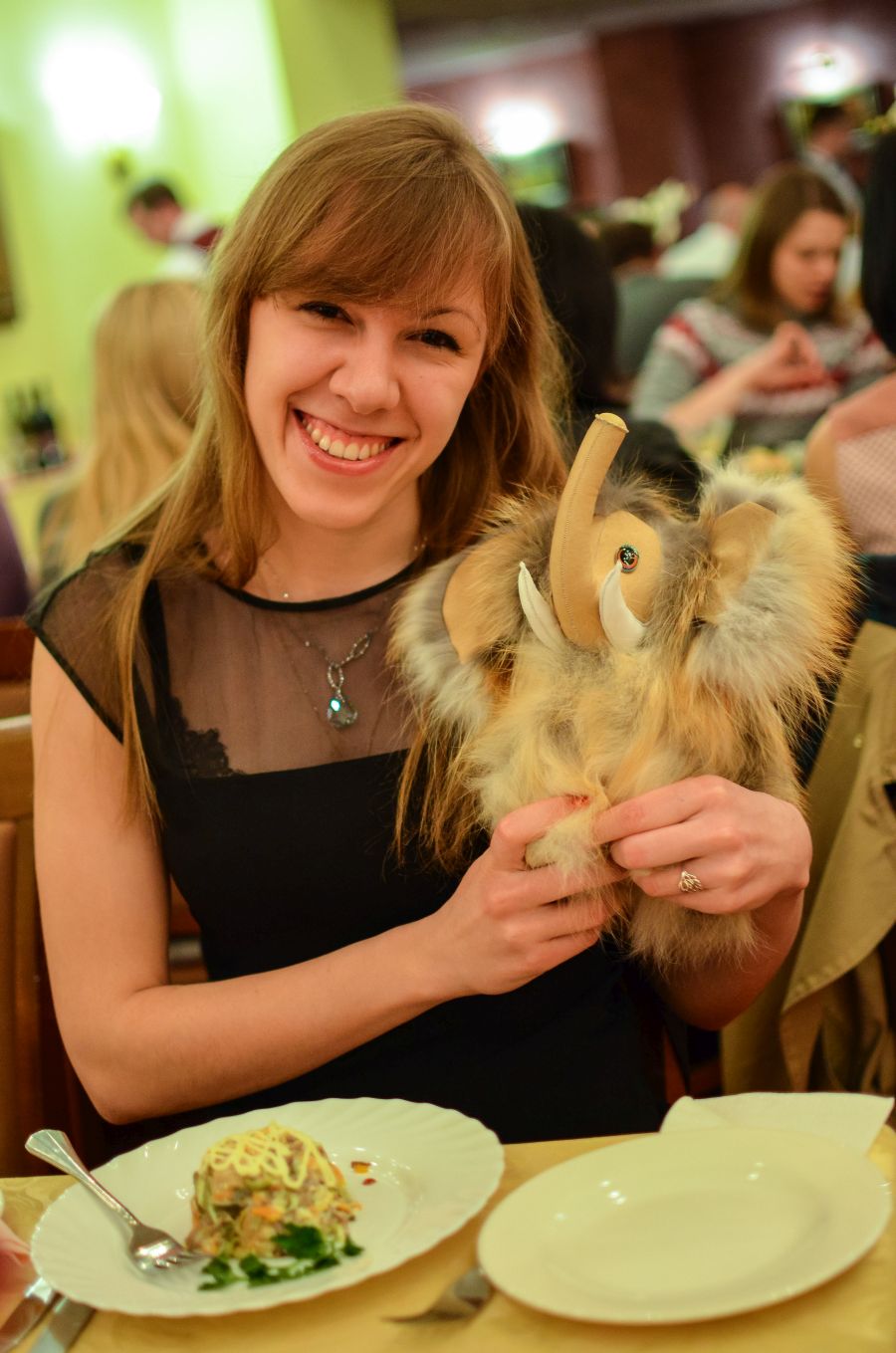 Don’t get fooled by her smile, she will beat you in no time!

Very much to the happiness of the Russian and worldwide supporters, unshared third and with 6.5/11 comes yet another…Russian: the former woman world champion, Alexandra Kosteniuk, who almost seemed to get the Chinese GM under serious pressure…it was not to be but the draw she scored today places her on an honourable third position. 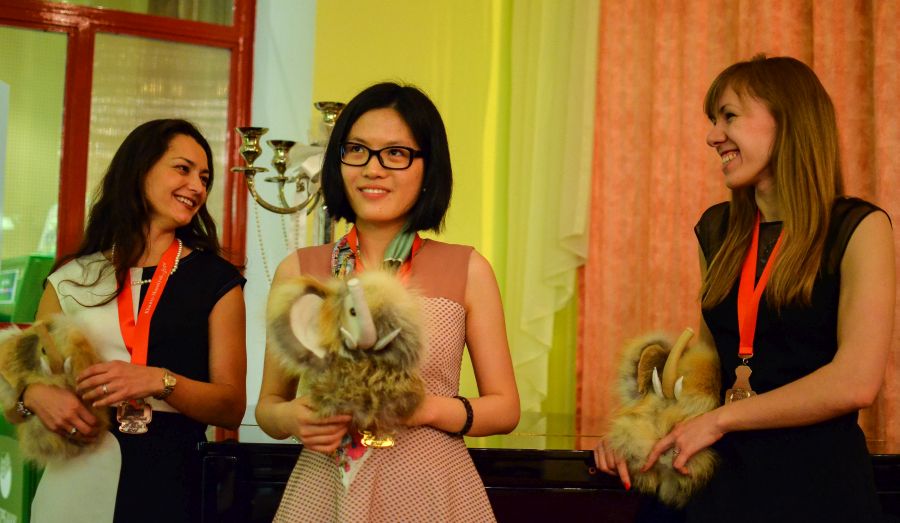 “We should make a plan to catch up with the ‘Express’…”

With 6 points out of eleven games are two players: Anna Muzychuk, who didn’t break the defense of Tatiana Kosintseva, and Kateryna Lagno, who ruthlessly defeated her compatriot, Anna Ushenina.

On 50% we have also two players: Nana Dzagnidze and Antoaneta Stefanova, who finished her tournament on a good note, with a win!

Less fortunate are the players on 5/11: Anna Ushenina and Zhao Xue, as well as Nafisa Muminova on four, who lost her game today against Stefanova but, nevertheless, had a good tournament after all! And in the end, comes Tatiana Kosintseva and Batchimeg Tuvshintugs, who are actually positive and looking forward for the upcoming 45 games of Rapid and Blitz! 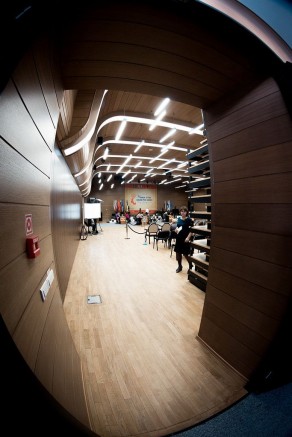 This is where it all happened!

The Winner was known, two title norms have been achieved, the Rapid and Blitz World championships are knocking at the Khanty Mansiysk’s door…so, did all this mean we would have a peaceful, fight(less), boring  last round?

There were actually many good reasons to hope for better and, indeed, today’s last and final 11th round didn’t cease to keep our eyes glued to the monitors!

Hou Yifan had more than once proven that the favourable tournament position doesn’t  dilute her playing mood and killing instinct in any way. Moreover, a last round win against Alexandra Kosteniuk would be a sweet revenge for their 2008 World Championship final match, won by the Russian with 2,5-1,5. At the same time, we could expect Alexandra to fight with full strength to keep or even improve her tournament position (third place so far). 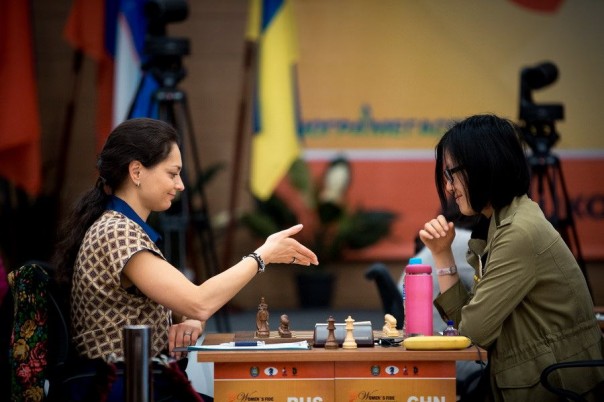 Show me what you got in stock for me!

And yes, the public was happy to see a fight straight from the Reti opening! Some fans were suggesting that Hou Yifan is out to destroy them all, by choosing a less theoretical debate just to get a game; others were on the Russian side, claiming that Alexandra would not accept anything else but blood on the chess board, giving all her strength  to get the point on her side. All in all it promised to be a very entertaining game and indeed, it was!

The opening and middle-game discussion gave Black comfortable play, as Alexandra’s strong pawn center promised to deliver later on, in the endgame. White had in return more piece activity, so the question was: would the former world champion neutralize the threats of the reigning woman world champion, keeping therefore a long term upper hand? 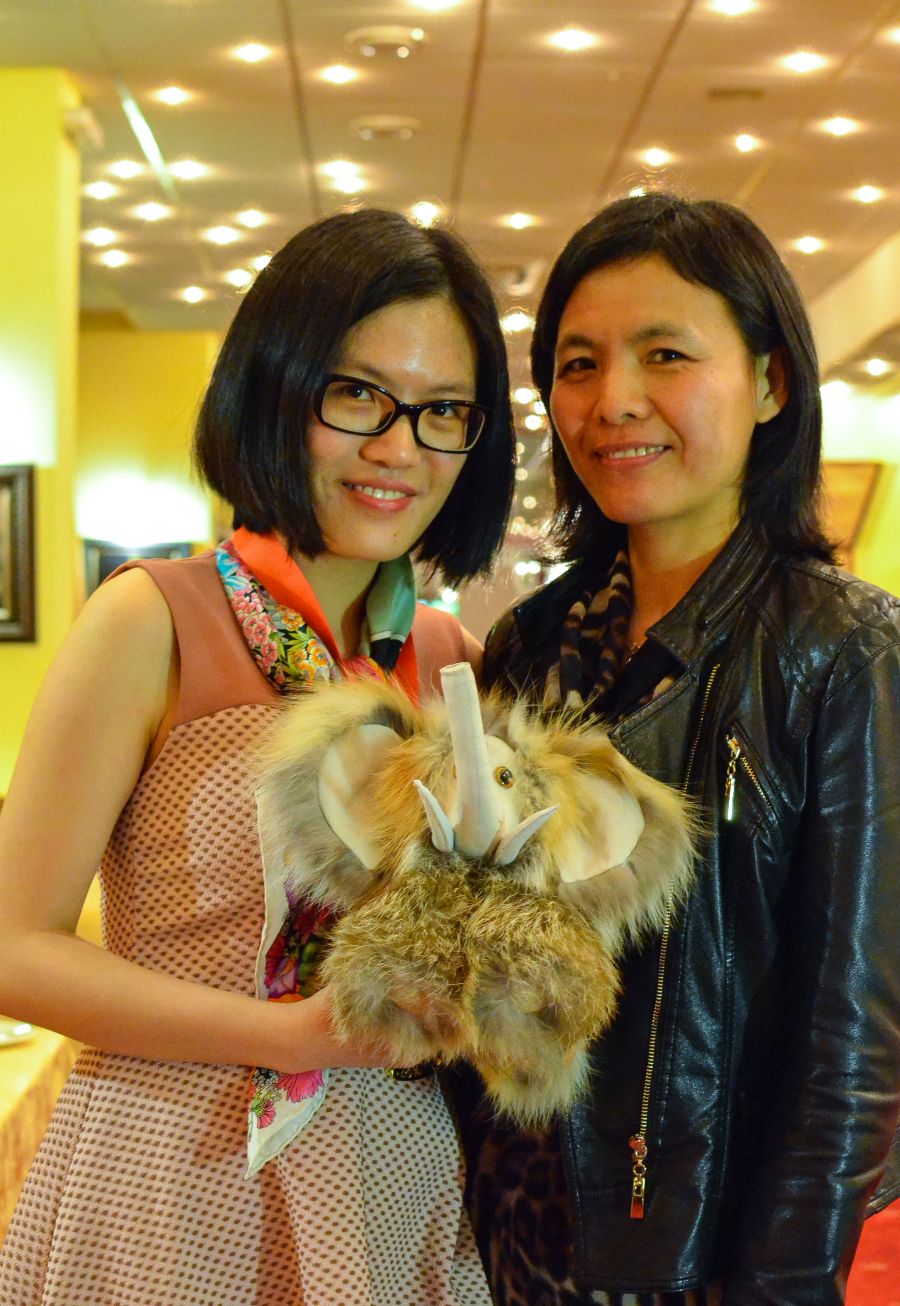 A great team: Hou Yifan with her mother

Alexandra did chase the Chinese all over the board but the tournament winner defended accurately in the only game that she actually found herself in trouble; although, during the press conference, Hou Yifan said she was not truly worried of her position. In the end, as we know, “all rook endgames are drawn”and this was no exception.

Alexandra was not very soft in regard with her play, sharing with us her disappointment of the too many blunders she had made…which, we may add, is the only way too success, self-criticism! And, just like she said, “45 more games in Rapid and Blitz…plenty of time to, hopefully, do better.”

Olga Girya, who had constantly built up her image as the revelation of the tournament, had a double sportive aim. Apart from defending her second position in the tournament, she might have wished to extend her GM norm to 11 games with a final win. She faced Batchimeg Tuvshintugs, ranked shared last on the standings, but such games are by no means easy! The Mongolian came in an excellent mood after her yesterday’s win… 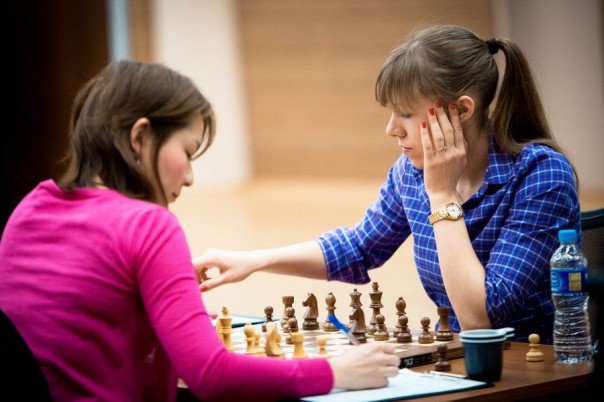 Olga had to defend a very tough position

And indeed, the Exchange variation chosen by Batchimeg against Olga Girya’s Slav was not at all dull and dry, and soon it paid off wonderfully, especially after the unfortunate and unlucky 13th (!) move played by Olga: 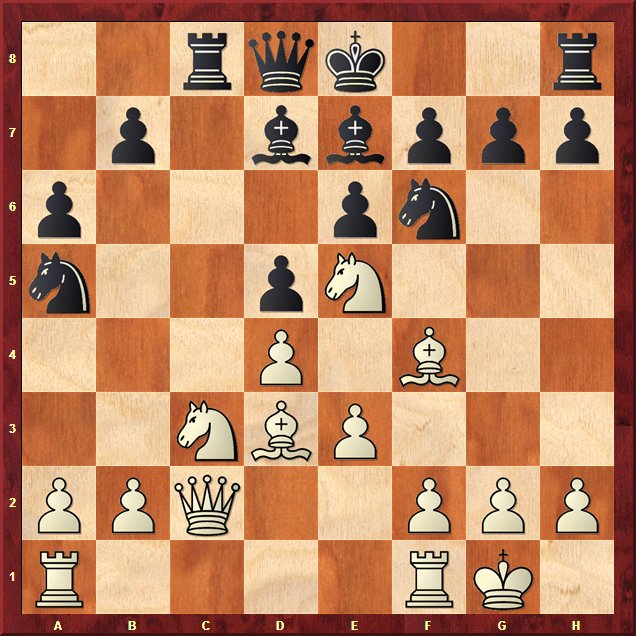 13…Bb5? Olga’s desire to exchange her light-squared bishop is understandable, since activating this piece is Black’s main problem, but with 13…Bb5, Black created a chronic weakness in her camp, losing a pawn by force and Batchimeg happily accepted the offered gift.

Olga further managed to flee into an endgame two (doubled) pawns down when the only question was whether she would succeed to hold a difficult position. After five hours of play she did just that!

Finally, we have the Ukrainian derby, Lagno-Ushenina. Sometimes, such duels between colleagues delivers an intensity of fight similar to those from the highest World level, so… we’d better keep an eye on this game, too! 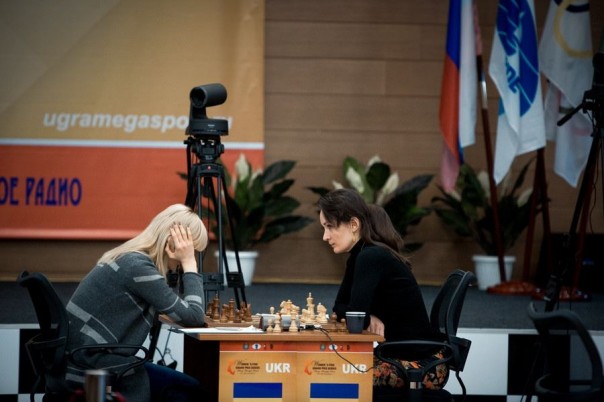 Katya preparing to throw in her lethal weapons

Right after three moves, it became clear we will have a subtle, maneuvering fight, each player trying to outplay the other in the 3.Bb5+ Sicilian. Lagno’s 6.d4 is a bit unusual, the same as (after 6…cxd4, rejecting the pawn sacrifice), 7.Qxd4.

Once landed in the Maroczy type of positions, both Ukrainians tried to impose their plans: Black looking for a good moment to break with b5, White keeping the pressure in the center and being on the lookout to blow things up with a well-timed e5… 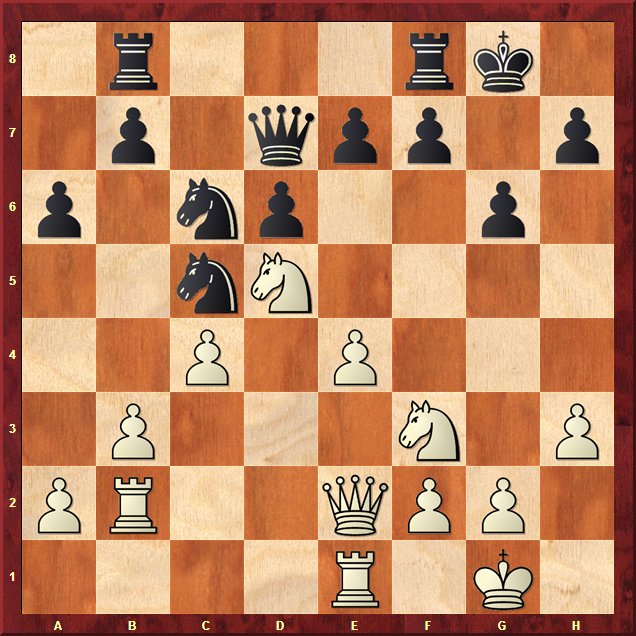 19.e5! The “White” Ukrainian found the proper moment, asking Black tough questions in the center and on the weakened black squares.

The bomb in the center vanquished Black’s defense and as soon as move 25, when Katya played the elegant 25.Re8, Anna had to congratulate her compatriot.

We seem to have a leitmotif in the last round: the lucky number of Kasparov – 13! This mere number brought luck to some players but for others it delivered the opposite effect. In this game, the Queens Indian, Petrosian System 13.Bxe7 that the Georgian played was logical, trying to take over the ‘weakened’ black squares, but in fact it is less precise, as Black’s play became much easier and it was not clear how would White infiltrate in the enemy’s camp. Instead, 12.g3 and Bg2 was perhaps preferable. 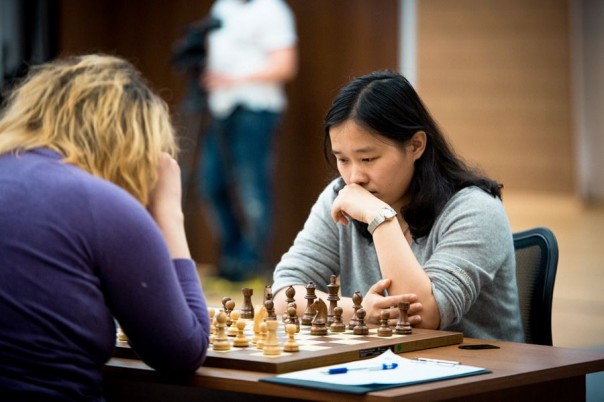 A good way to finish a rather shaky tournament: a point for Zhao Xue

But the game continued, it became a fierce strategical fight which eventually turned into a tactical one, when time was moving faster than it should have… the Georgian found a very good practical way to combat Black’s march of the kingside pawns and its strong center. Although both, the white and the black kings were rather vulnerable, Nana could have struck first with: 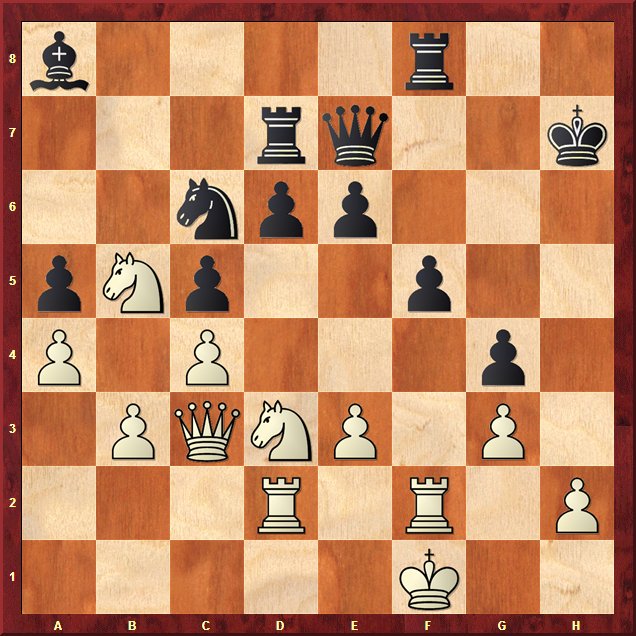 30.h3 or just one move later, by having played the same pawn move, clearing the way to the enemy king on the h-file. Instead she decided to shelter her own king first, but White’s king marathon via g1-f1-e1… and all the way to b1 took too much time, both in terms of moves and seconds on her clock.

Zhao Xue took her chance, cleared up the board of the white coloured pieces, which were falling one by one under the poisonous Black’s moves. In the end, Black’s two extra rooks were too much and Nana resigned.

Zhao Xue: “I am disappointed with my result here, I just want to forget it, although I won the last round. It is my worst performance in the GP series…except for Hou Yifan, I am not sure there are other players who can say that they are genuinely happy with their games…”

Tatiana tried to surprise her opponent by meeting her Sveshnikov Sicilian in exactly the same way Nisipeanu did against Anna: with the fashionable and strategically ambitious 11.c4 system. Just like on that occasion, Anna refrained from blocking the queenside with 11…b4 (by far the most popular answer) in the favour of the dynamic 11…Nd4; on the next move the opening surprised re-bounced, as she deviated first from her game against the Romanian GM: 12…Be6 was played, instead of 12…Bb7. 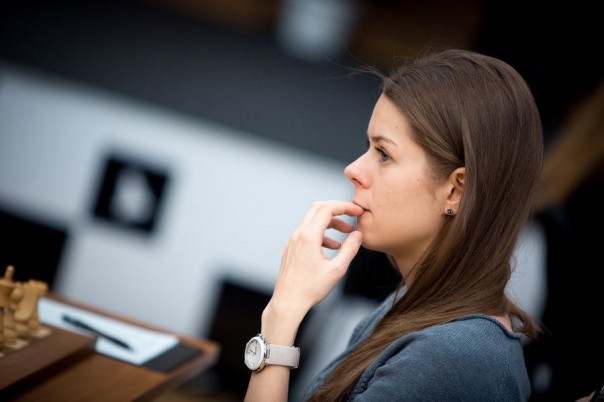 How was that line again?

So it was actually Tatiana to get a return surprise and it is certainly an unpleasant feeling to have to start thinking over the board in such slippery lines. She didn’t find the best ways, Black equalized and soon Anna started to press with: 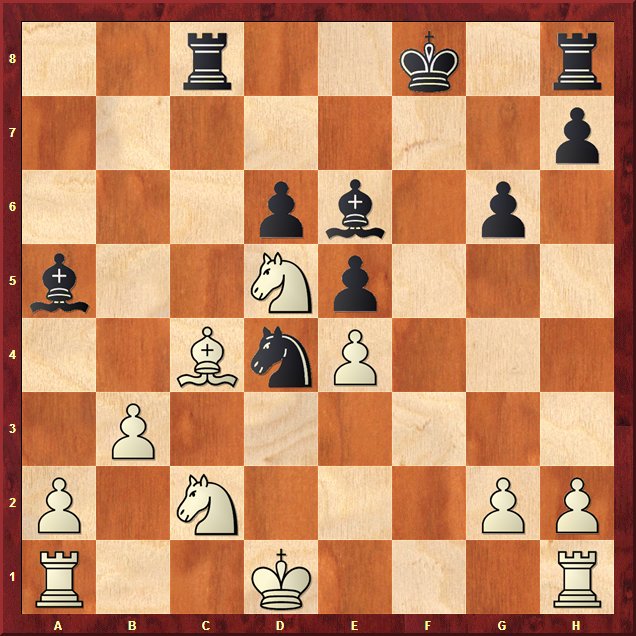 22…Bg4+ 23. Kc1 and 23…Be2 – this is what Tatiana missed and it became clear to her that Black is having very promising compensation for the pawn…and the clock started to tick faster and faster…but for Anna too and, although she truly liked her position, she couldn’t find the best way to increase the pressure and the draw sign appeared on the scoresheet after repetition of moves.

Although Anna hoped for more at the beginning of the tournament “after the terrible losses against Girya and Kosteniuk I had to calm down and try to minimize damages.” We are looking forward to the Rapid and Blitz! – both players exclaimed in the press room.

So today we had another “orthodox” kind of opening from the ingenious Bulgarian, the Steinitz deferred Spanish. Muminova used the same setup as against Zhao, the old-fashioned Duras (d2-d3 and c2-c4) system, but Stefanova developed her bishop to g7 instead of e7. After 13 moves, the structure looked as if resulted from some classical Be3 KI lines, with the sequence …Ng4, Bg5 f6 and later dxe5, …fxe5.

After her technique had let her down a bit in the previous rounds, in today’s game Antoaneta displayed, once again, her extremely powerful play! It all started with her move number 13, which was far from being ‘unlucky’, as it punished White’s imprecise opening/middle game strategy: 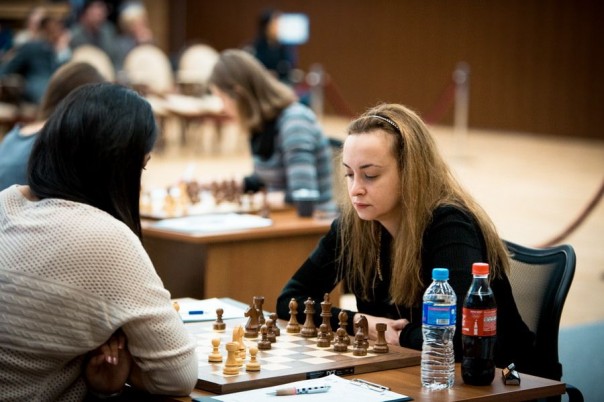 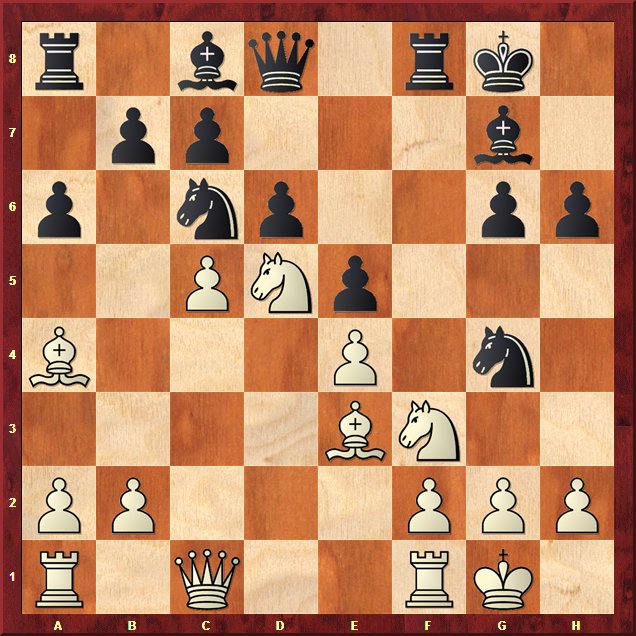 13…Rxf3!, where the only way for Nafisa to keep the game going was to accept the sacrifice and play: 14.gxf3 where the strong 14…Qh4 is countered with yet another quiet but very important move: 15.h3! – not easy to foresee… the interesting point of this subtle move is that after 15…Qxh3 16.fxg4 Qxg4+ 17.Kh1 Qf3+ White has 18.Kh2! where it is not clear whether Black has more than a draw.

But after the game continuation: 14.Bg5? Nafisa couldn’t hold her position together, although she still put up a fight until move 40, when she had to bow in front of the former women world champion’s strategy…

“It is nice to win the last round, at least I am going with a good feeling and next time I will do better.” (Antoaneta)

After such ‘headaches’ it is good to have some relaxing time…closing ceremony today, another opening one tomorrow…the ladies have no rest! 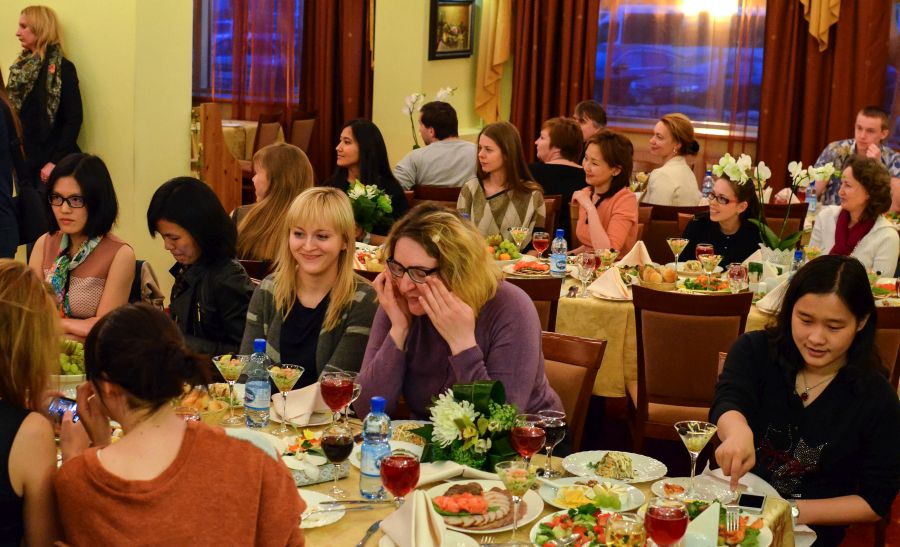 The players are actually quite good friends! 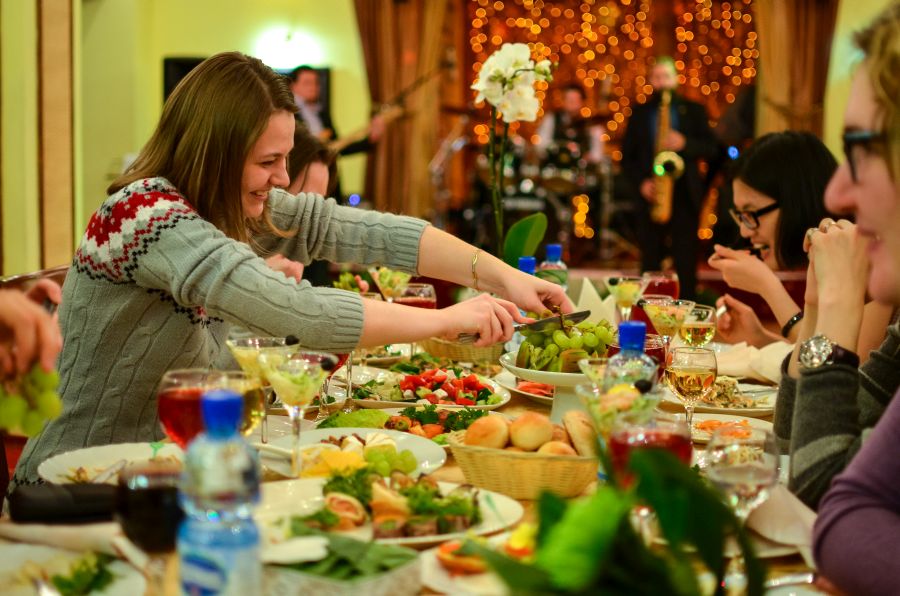 Enjoying the little time between one event and another… 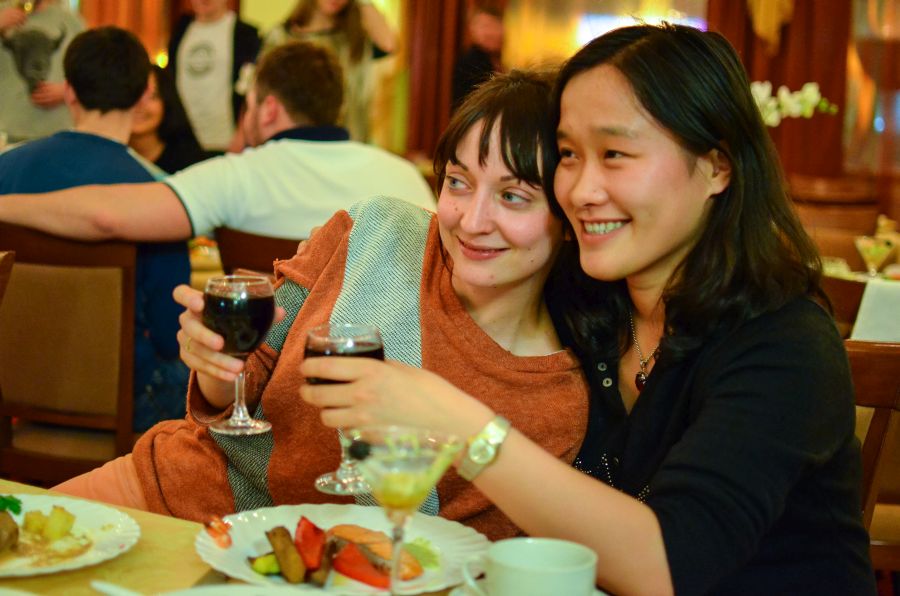 Preparation for the Rapid & Blitz 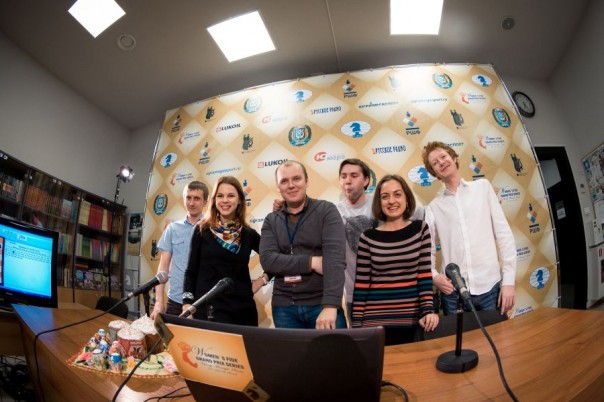 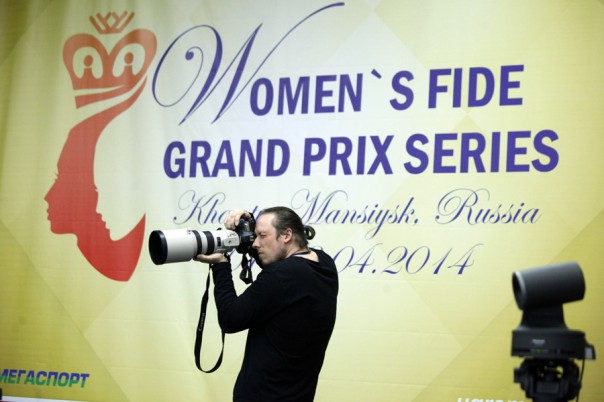 We worked for you!