Today, 20th April 2014, was marked by three important moments in the FIDE Women GP from Khanty Mansiysk: the Chinese power-lady proved indeed to be unstoppable: today’s draw against Anna Muzychuk secured the first place unshared for Hou Yifan, even before the last 11th round! Chapeau for the reigning woman world champion, who ruled the tournament with no sign of hesitation and not even once having had a bad position!

On the second position, after her win over her Russian colleague, Tatiana Kosintseva, comes none other than the tournament’s sensation: Olga Girya! Her outstanding 6.5/10 brought her a nice extra detail too: a full GM norm out of 10 rounds.

And just like yesterday, third comes the former women world champion Alexandra Kosteniuk, who is not willing to share it with anyone, as after today’s win over Nafisa Muminova, she is alone on 6/10.

It seems that the very important holiday we were all celebrating here through chess, Easter, brought a lot of success to at least two of the Russian players! But we all did enjoy the very nice atmosphere created by the tournament organizers, who succeeded to bring the traditions and cultures together in the big family of chess players! Although far from home, although having to fight tooth and nail over the board, the Easter feeling was certainly present: in the press conference, the players continued the battles in the traditional Easter fight of…breaking the coloured eggs:) It was a common occurrence that the less fortunate chess players took over their more successful colleagues in this small revenge, known as egg tapping. 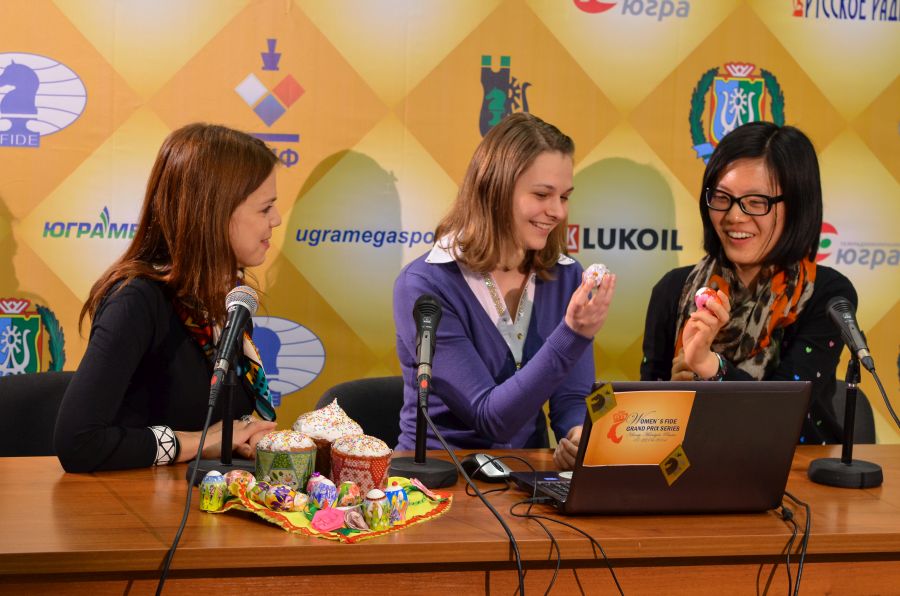 If Yifan won the tournament, Anna got her vengeance by winning the egg fight!

In the leaders’ footsteps and with 50 % are only two players: Anna Muzychuk and Nana Dzagdnize, who both drew their games. Alone on 4.5/10 is Antoaneta Stefanova , closely chased by Zhao Xue and Nafisa Muminova on four points.

For the third Russian player in the field, Easter will surely cheer her up, as Tatiana Kosintseva lost her game against Olga Girya, remaining on 3 points, just like Batchimeg Tuvshintugs. But the latter scored a very important victory for her moral, by winning against Zhao Xue!

“After two losses and a terrible blunder, I thought the aggressive approach today will might bring even further disappointments. So a draw against the tournament leader is far from being bothersome, it is good to run away from the unfortunate series I had and try again tomorrow”- Anna said during the press conference.

In the rather calm 3.Bb5+ Sicilian that the Slovenian chose, the Chinese showed she knew was she was doing, as she went for a theoretical line which leads to a forced draw. The key move, also employed by Gelfand, is very well known and considered to bring Black half a point with: 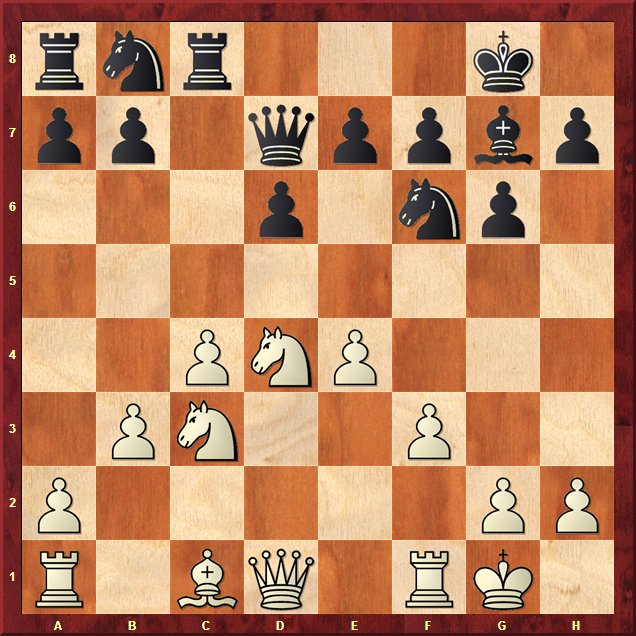 11…d5, where 12.exd5 is met with another punch: 12…Nxd5! 13.Nxd5 e6 and Black takes back the piece, enjoying his little moment of glory to have equalized comfortably. Soon after, in less than an hour, the ladies shook hands and agreed it was time to properly celebrate Easter, together with us in the press room:) 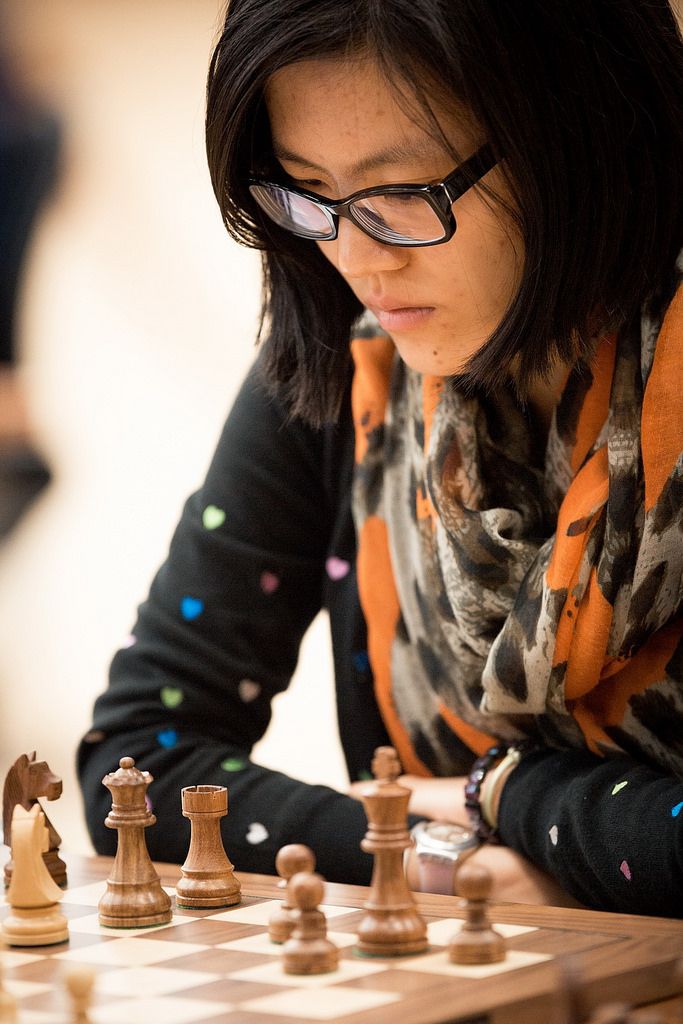 An outstanding tournament for Hou Yifan, we all congratulate her for being already 1st no matter what happens tomorrow, and we hope to see her fighting again in the World Cup…although she confessed: ”I haven’t decided yet whether I will play or not. But I am very happy with the tournament here, as I didn’t play quite successfully before…”

A loss against the strong GM from China, Hou Yifan, can happen now and then and it was not something to stop the talented player from Russia, Olga Girya. She came back on her feet, confidently taking the advantage in a Bogo-Indian against Tatiana Kosintseva. 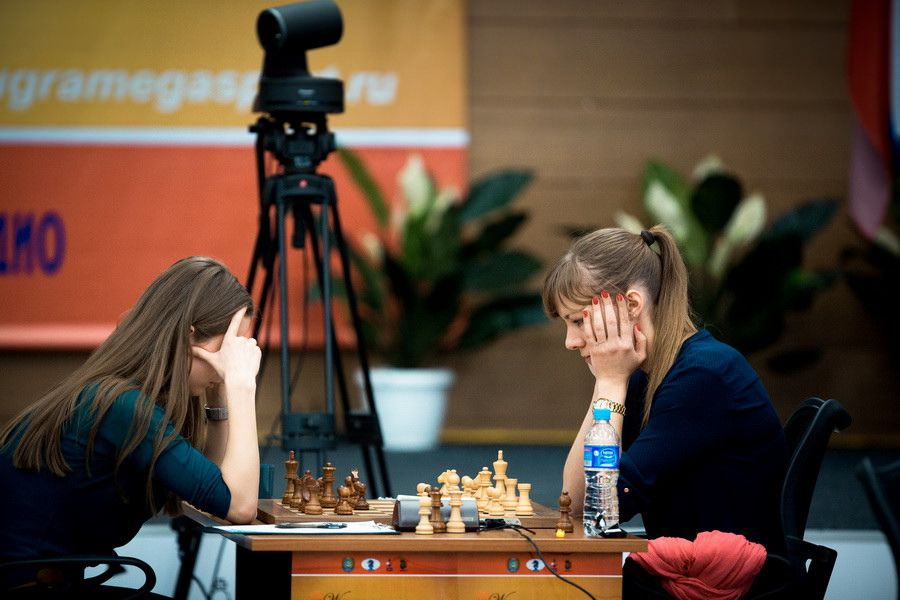 Another crucial game for Olga, not only for the standings but also for a GM norm

Further she proved, once again, her class with her voguish repertoire and the lethal bullets Olga always keeps at hand. In this game the gun fight started with: 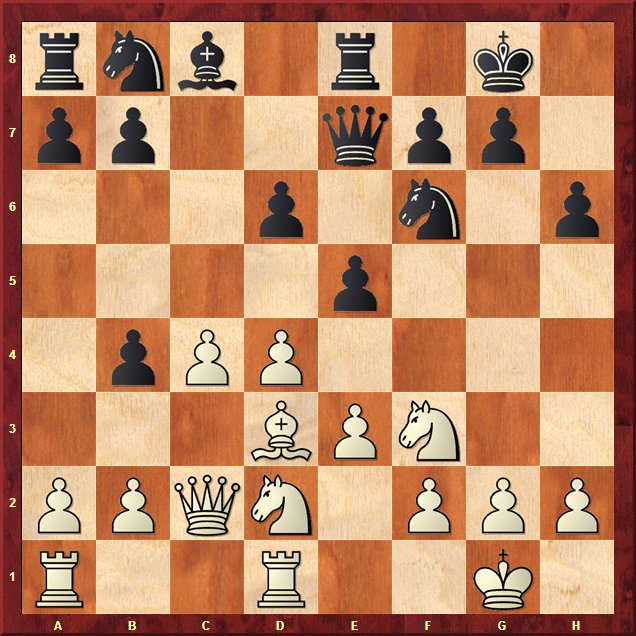 Powerful play from the local hero (Olga was born in Khanty Mansiysk region), who went straight for the kill in a position where the more restrained 12.Ne4 would have promised White a solid edge. 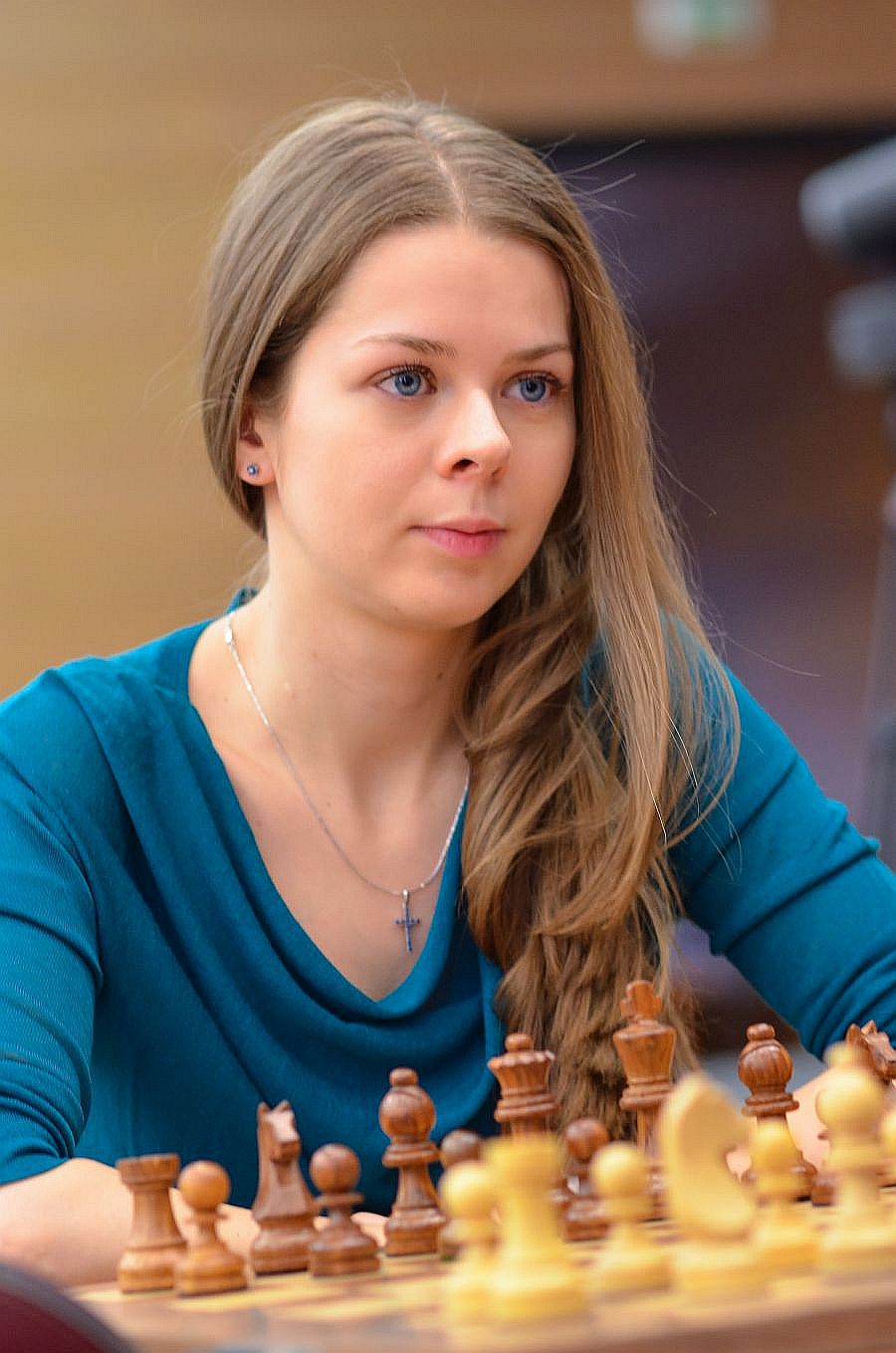 The pawn Olga won gave her  a very enjoyable game, yet with still some technical difficulties to convert it into a full point. But her Russian colleague failed to put up a stronger defense and missed at some point a very good practical chance to hold: 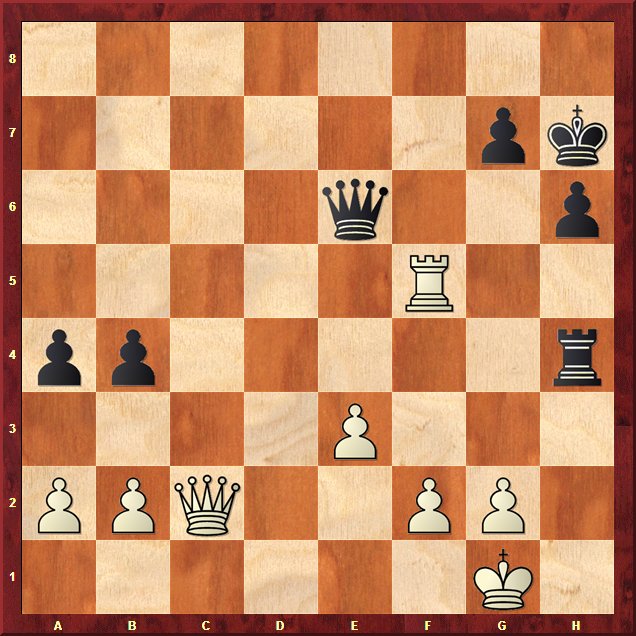 34…Rc4! 35.Qd3 Rc1+ 36.Kh2 Qc4 when the rook endgame after 37.Qxc4 Rxc4 is drawn because Black follows up with Rc2. In the game, after Tatiana’s 34…Qg6, Olga was allowed to transpose into a much more favourable rook endgame which she confidently converted into a win. 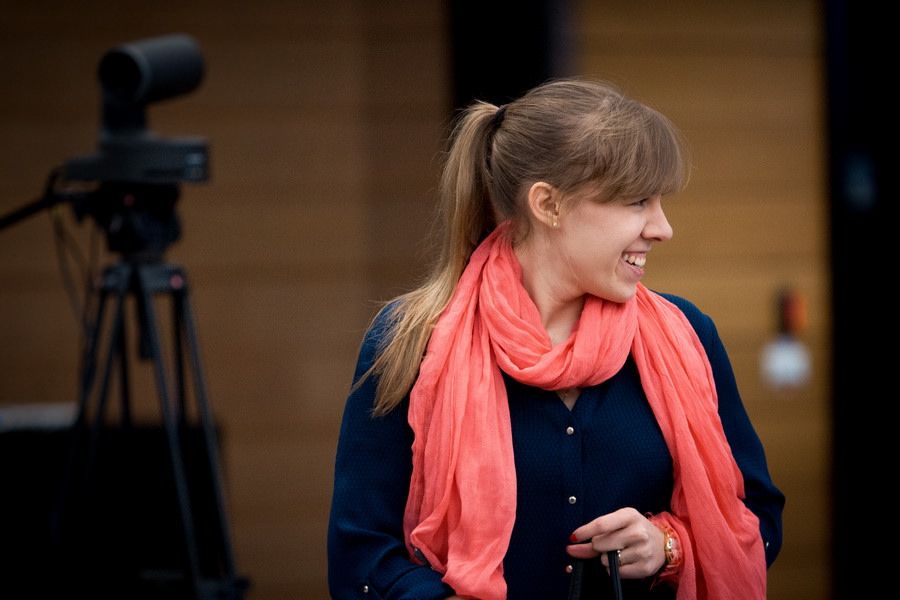 Olga on a very honourable unshared 2nd position and also a full GM norm out of 10 rounds!

Although the Russian WGM’s performance is outstanding, she keeps her feet firmly planted on the ground as she modestly “accepted” the facts: “I cannot say I am thrilled I took this norm, I don’t pay that much attention to statistics, titles and honors; I just want to play good chess.”- and well she did!

Slight change of generalship for today’s game from the unpredictable Bulgarian GM; we all know that Grunfeld is Kateryna Lagno’s main weapon in her arsenal against 1.d4, so many would have not expected Antoaneta to go precisely into such lengthy theoretical discussions, to have the fight exactly on the enemy’s favourite battleground. 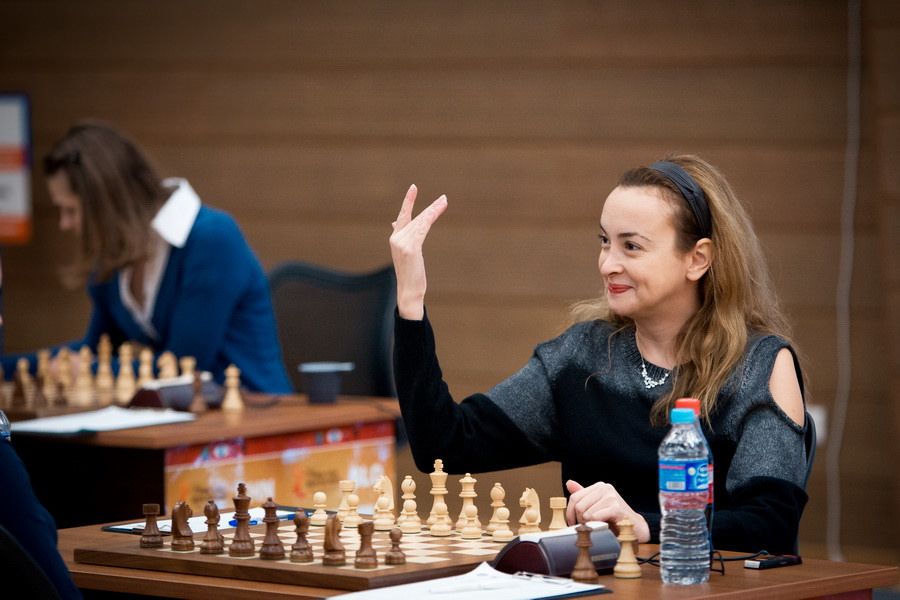 Bring me that point!

But never say never! Antoaneta prepared very well for her game, although she still chose the less topical 5.Bd2, which makes perfect sense, since the lines are not as branched as in most of the crazy Grunfeld variations. It was obvious she tried to hit in the Achilles’ heel, as Katya has played the same line against Elina Danielian, in the Women GP from Jermuk, 2012. Further on, Stefanova used an idea that was recently tried by Shirov, which suits her style very well: 8.h4 – with all forces forward!

But the Ukrainian GM seems to be the kind of player who checks and repairs, if necessary, the possible holes in her repertoire, as she soon deviated from her previous game with the new move 9…e6 (instead of 9…Bxc3+), thus meeting Stefanova’s opening surprise with… a return surprise! 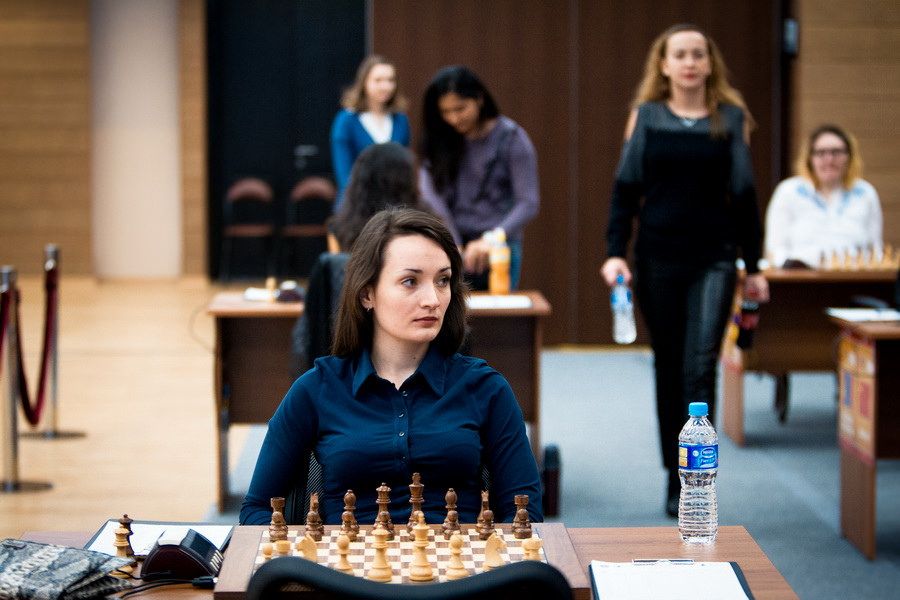 The position remained very unclear for a long time, reaching many interesting and debatable moments, but all in all a great fight! Black had good compensation for the sacrificed pawns, and it was only later on that maybe Lagno didn’t find the best continuations, as she let her pieces land into an unpleasant endgame… 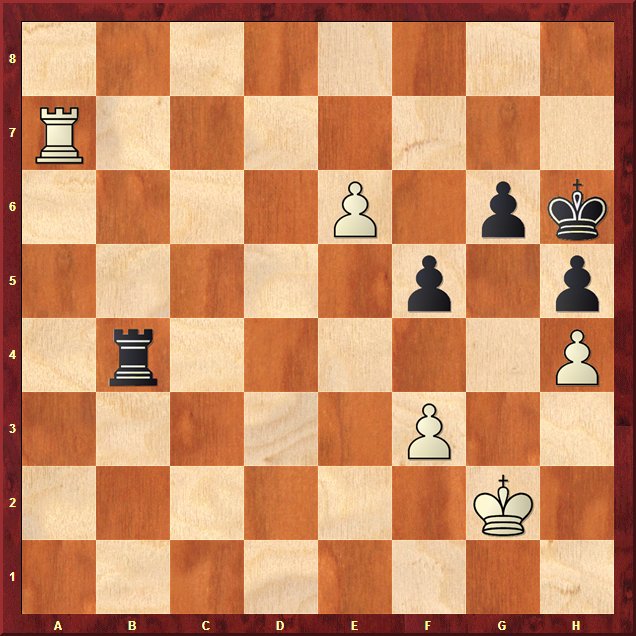 But the moment was not spotted and Katya defended like a lioness, to keep her position together for a draw.

The Chinese played in a rather experimental way against the Grunfeld and it didn’t turn out very successfully, especially since Batchimeg reacted in the most principled manner, calculating her way out with a developing but also, tactical move: 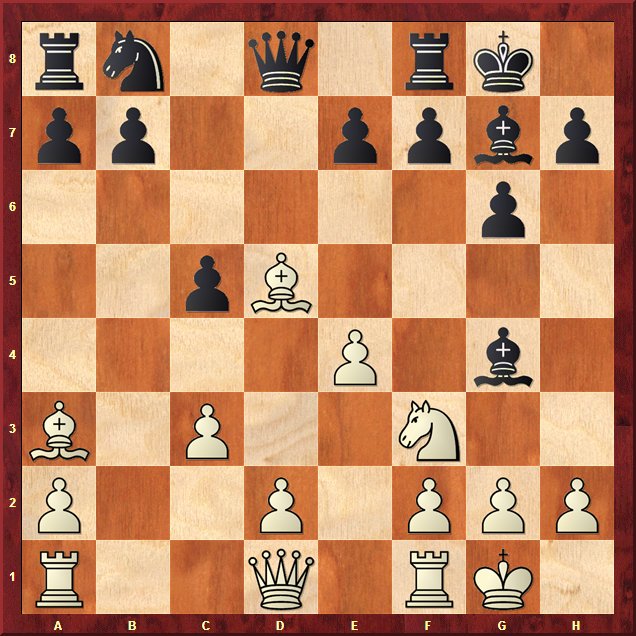 There was not much to be done for White, to improve the less favourable position and the Mongolian demonstrated she can surely put up a fight in Khanty Mansiysk. 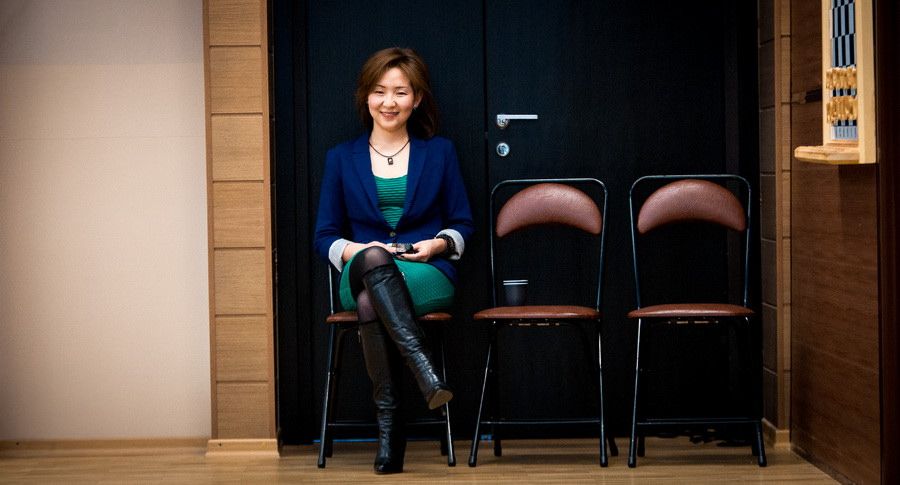 The always kind Batchimeg is now happy too!

An off day for the Chinese but for Batchimeg it was certainly a game to cheer her up: ”I am very happy…” – and you can watch the entire press conference, where Batchimeg shares very openly her emotions in a truly inspiring way.

Nafisa Muminova treated the ever-sharp Ragozin in a far from conventional way, moving several times with the same pieces and recklessly pushing her kingside pawns, everything for the sake of getting the bishops pair. Alexandra Kosteniuk decided to punish Blacks delay in development with 15.e4, but this weakened the dark squares, offering Black strong counterplay, based precisely on her powerful kings bishop. 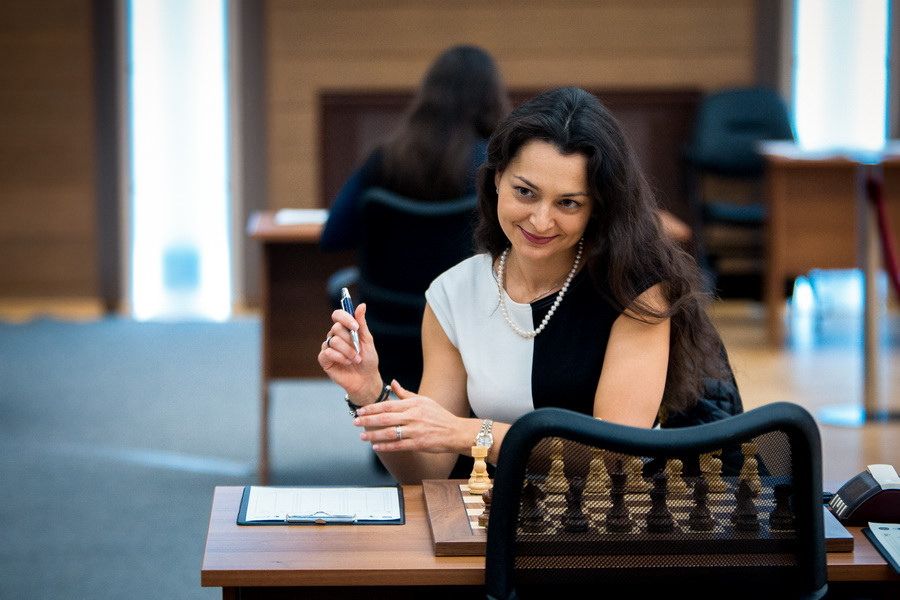 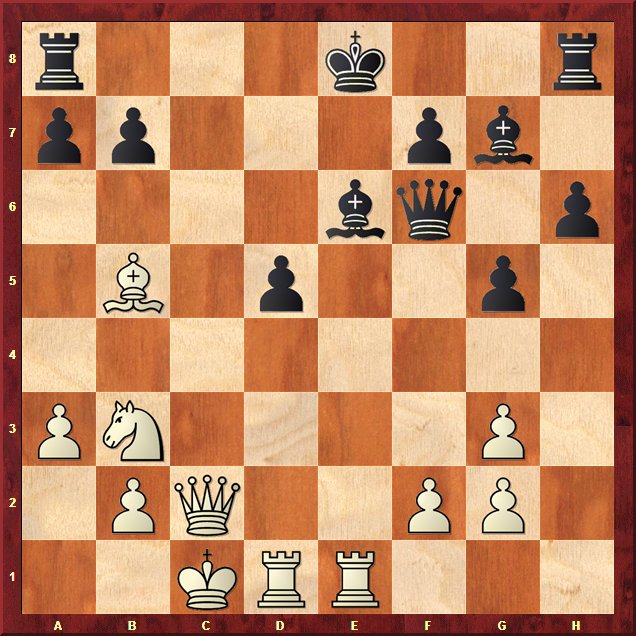 The very tough tactical debate moved its territories into the endgame, which seemed to be completeley fine for Nafisa…but then she gave a pawn with an unfortunate check: 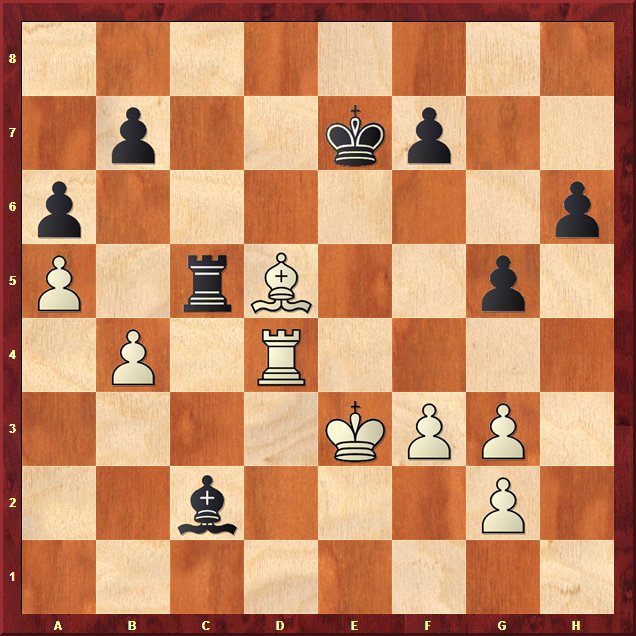 With such a present in her hands, the former women world champion said “thanks”, won the rook endgame without any extra headaches, firmly keeping her third position in he standings.

Anna Ushenina repeated the 6.a3 Rubinstein Nimzo line which had yielded her a full point in the first round game against Muminova and which had occurred once again, although with an opposite result, in the seventh round game Batchimeg-Muminova. 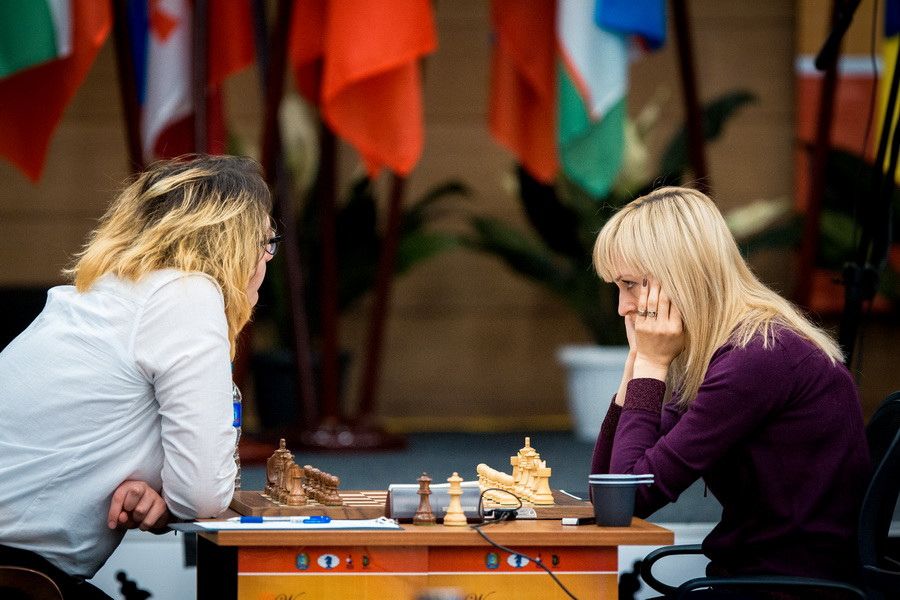 How to win this game…that is the question

This time, Black refrained from taking on c3 in the favour of the old-fashioned 6…Bd6. The system arising after 7.Nf3 dxc4 8.Bxc4 Nc6 had been analyzed by Ragozin, as an essential complement of the opening bearing his name and was a favourite weapon of Fischer and Tal.

Dzagnidze deviated with the very rare 7…b6, which looks like a cocktail of plans, maybe a bit “hotter” than the position allows. After 8.e4 White obtained a comfortable advantage, but then Nana’s experiment was justified psychologically, since Ushenina played slowly in the opening and the initial phase of the resulting middlegame. With little time on the clock, she missed the tactical operation: 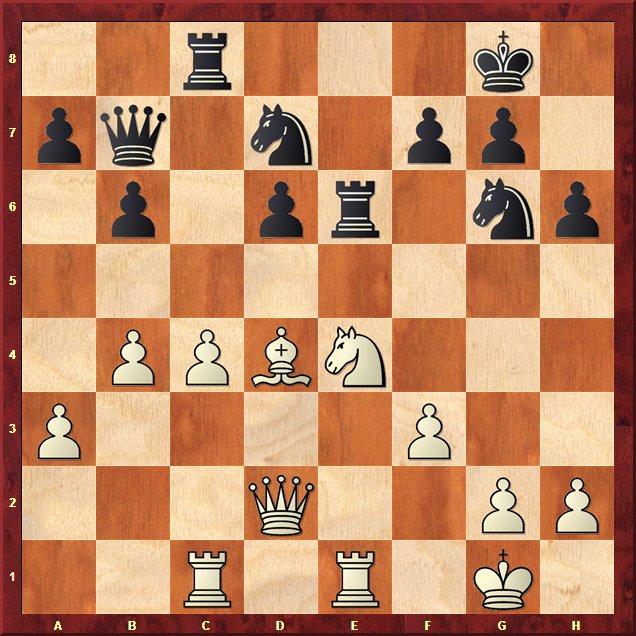 26.Bxg7 Kxg7 27.Nxd6, when White’s rook and two pawns would have been stronger than the two knights, especially with the weakened black kingside. One move later, 27.Rfd1 would have kept all the trumps, whereas the played 27.Qd4 followed by c4-c5 eventually led to simplifications and plain equality. The final peaceful result was accepted by the players on move 49. 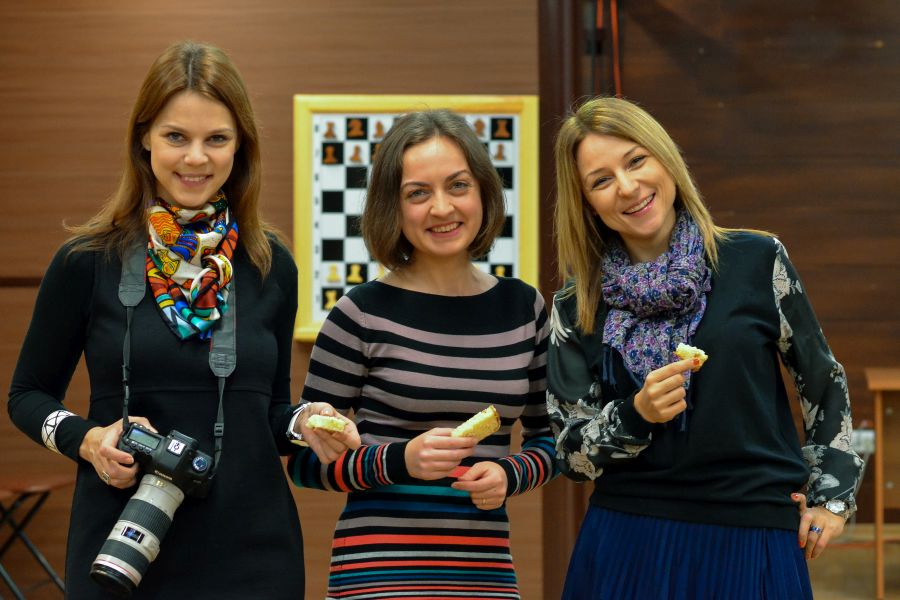 HAPPY EASTER, all the way from Khanty Mansiysk!

Just one round to go, so see you all tomorrow at exactly the same time as usual: local hour – 15 o’clock!