If you have thought that chess had little or no connection with physical sports, the fourth round of the Khanty Mansiysk 2014 FIDE Women GP may change your view. In the games that finished last, we have lived with the feeling that we were following tennis or volley-ball matches, due to the successive change of evaluation reminding of the ball jumping from one side to the other. Early concessions in the opening, big material advantages in the middlegame, mutual technical slips in the endgame, all these must have got even more on the nerves of the trainers and fans than of the players’ themselves! 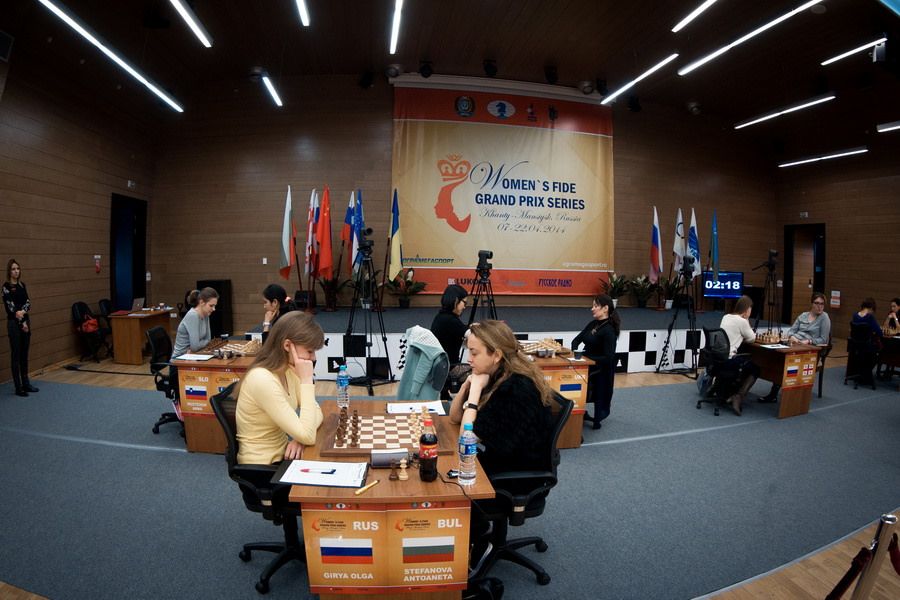 We can safely put the blame on the tiredness accumulated over the first hard fought rounds. But even though several players can consider themselves lucky (and an equal number of them – unlucky) for the today’s results, the overall balance didn’t suffer big shakes. Hou Yifan remains in the sole lead and little is changed at the top.

Everybody wanted to see if Hou Yifan’s string of victories will continue undisturbed.
Kateryna tried to bring the Chinese in the endless discussions of the Catalan theory but Yifan thought a Benoni would suit her better.
Katya didn’t expect it at all: “My opponent decided to have a mess:); we had a very complicated line, I just couldn’t remember my repertoire.” 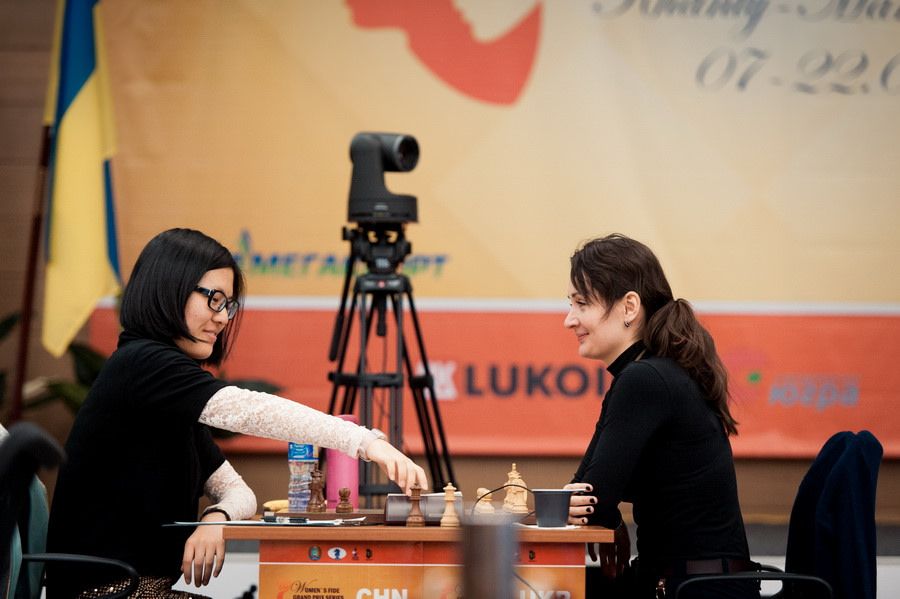 The Chinese seemed to be well prepared in the opening, only later on, during the press conference, she confessed it was not quite so: she sacrificed an exchange, in a true Benoni crazy style, as early as move 12: 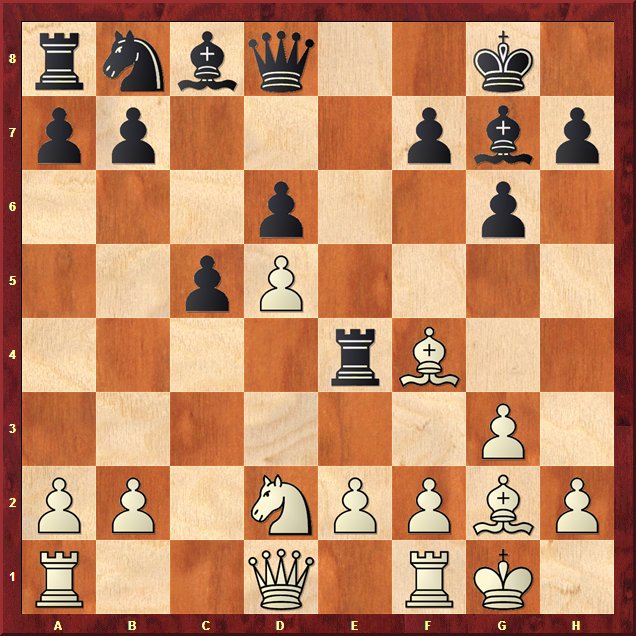 12…Rxf4! In the old line Black was usually going for 12….Rb4, but the Chinese is not afraid of positional sacrifices and she keeps on spoiling us with spectacular chess.
Black’s compensation consists of a potentially dangerous queenside majority and in the White’s chronic weakness on f4.
As in any relatively „young” variation, there is a lot of unexplored territory and, unsurprisingly, Black’s novelty (a natural developing move, 15…Na6) arrived just three moves later. Ironically, this knight was deigned to force the perpetual drawing mechanism.

The Ukrainian was up to the task, as she played the opening confidently, took the offer, but after Hou Yifan’s over the board novelty, 15…Na6, she sank in thought; although an exchange down, Black’s play is somewhat easier, from a practical point of view (bishop pair, good coordination), as it is not quite clear how and when and if White should put the center on fire with e4-e5. 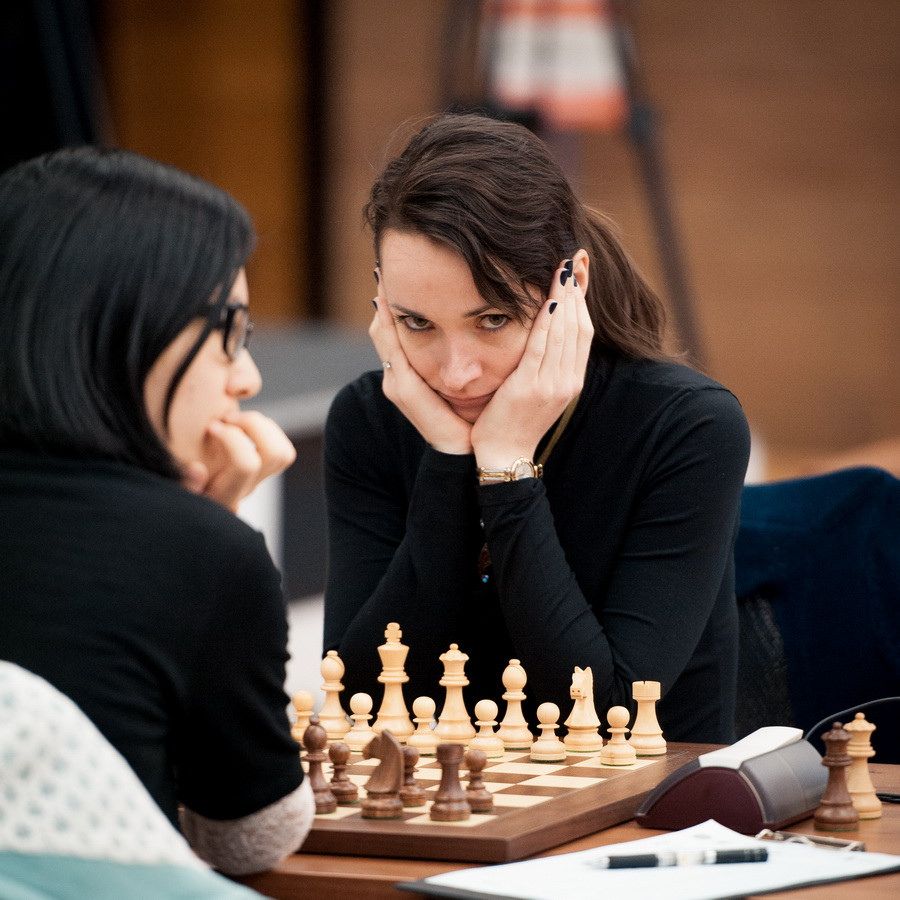 Both players estimated that it might prove too dangerous to seek for more, the lines which could have appeared too difficult to calculate all the way until the end and a draw was agreed by repetition – the third game in a row the Chinese finishes under 25 moves, the Ukrainian being the only one so far who managed to slow down Yifan.

After yesterday’s loss against Hou Yifan, when the Georgian suffered under the Chinese impeccable technique, she came armed to the teeth for today’s game against Kosintseva. In the extremely theoretical waters of Ragozin, Dzagnidze threw her preparation on the board until move 22.f5, following an idea employed by Shimanov against Wei (2012).

Kosintseva defended well but, given the horrendous time trouble, her vigilance went down and erred with: 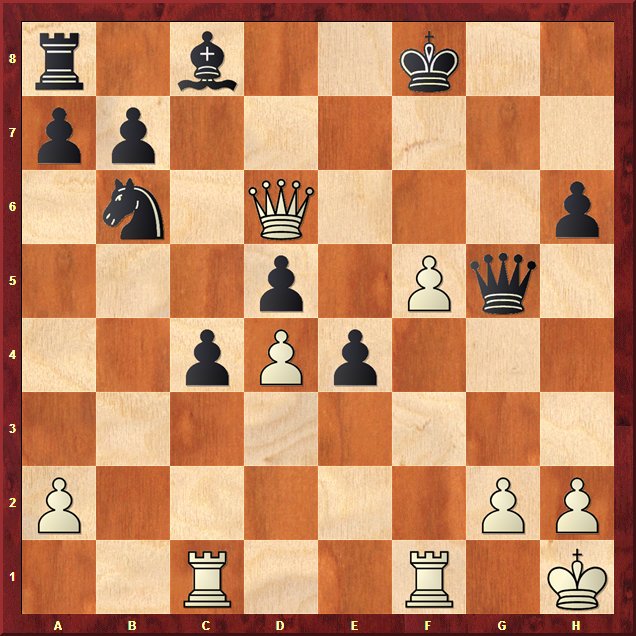 25…Kf7?, where after the strong 26.f6 followed by 27.Rc3 from Dzagnidze, there was nothing to be done to save the black king from a brutal end. Instead, Tatiana should have played 25…Qe7, where the “great”silicon machines claim White has nothing more than a draw with 26.Qxh6+ Qg7 27.Qd6+ Qe7 etc. 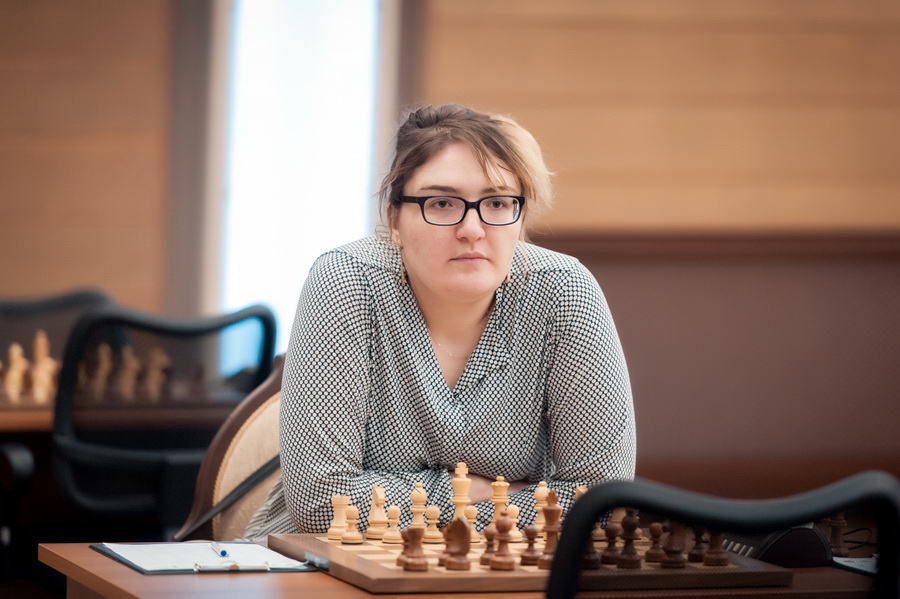 Naturally, Nana expressed her opinion during the press conference, to which most of us subscribe: “Perhaps computers are saying that Black is fine but it is difficult to play this position with Black over the board”. Her opponent agreed: “maybe this variation is not correct, I checked it way too long time ago”.

An excellent day for the Georgian GM, who stood up after not a great start of the tournament, entering now the free day of tomorrow in good spirits.

The Mongolian had to defend as Black for the second time in a row and (again!), in the same Berlin with 4.d3, just like in her yesterday’s game against Tatiana Kosintseva.
It is a common occurrence in top level chess, especially in round robin tournaments, that players are trying to hit in the same weak spot; in short, this is called “seeking for Achilles’ heel”. Since during a tournament one doesn’t have the time nor the energy to correct the eventual errors of his (or her) repertoire, it does happen once in a while that a player is caught on the wrong foot more than once, thanks to this strategy. 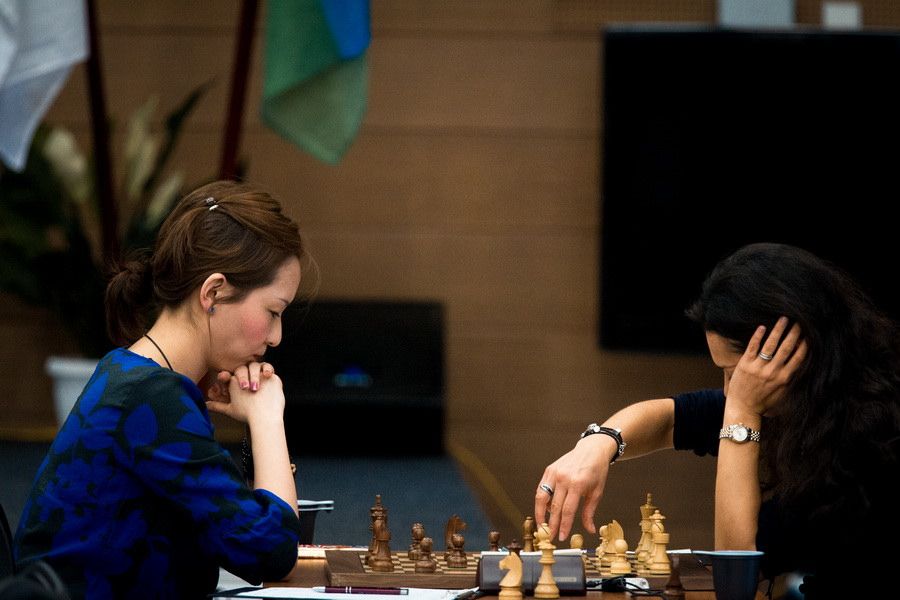 All these may be the background of the game of today; having noticed that Batchimeg’s theory has suffered against Kosintseva, Alexandra followed in her compatriot’s footsteps, although later on she played 5.0-0 instead of the line with 5.c3.

The early knight jump 5…Nd4 (an important alternative to 5…0-0) is aimed to solve Black’s problems of space and coordination by exchanging knights. On the other hand, it gives White some time for development and space grabbing in the center. As a consequence, Black gets a solid, but somewhat passive position.

Kosteniuk’s strategy paid off, as Batchimeg was struggling her way out and went under 5 min on the clock with 20 moves to go until reaching the time control. Naturally, her position aggravated with each move, she lost a pawn, then an exchange and eventually, the game: “My brain is not functioning, I played some weird moves…I truly hope to do better”, Chimy said. The free day will give her time to regain her composure and to fight back. 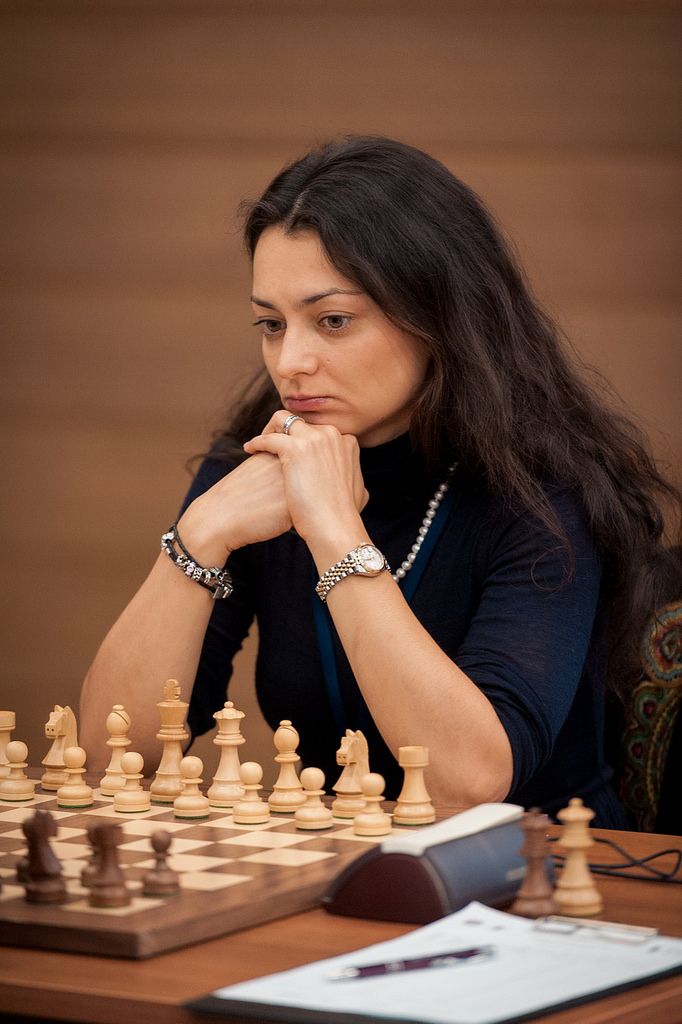 As for the Russian former women world champion…she was not pleased with her technique: ”I was surprised that Black was able to hold on to the game for so long, I am sure I missed some things, since I thought I should have won before the time control.” Nevertheless, a point is a point and Alexandra is back in town with 50%.

The Uzbek player gave a good account of herself so far, being on a great 1.5/3 before today’s thriller. Having to face the Slovenian GM with the White pieces, Nafisa decided to move away from theoretical struggles and opted for a rare Sicilian setup. But the opening strategy didn’t go as planned, as she soon got herself in trouble…after having played 3.Bb5, she remained true to her maneuvering policy, which paid off in the previous rounds. Today, the bishop retreat 8.Bd3 gave the upper hand to Muzychuk, who didn’t need any further invitations to take the driver’s seat.

The Slovenian GM grabbed her chance, applied pressure in the center before even castling and got herself a very nice and comfortable advantage, which….she threw away and entered, we all know it, the drawish zones of rook endgames.

Small question for the public: where would you go with the white king? 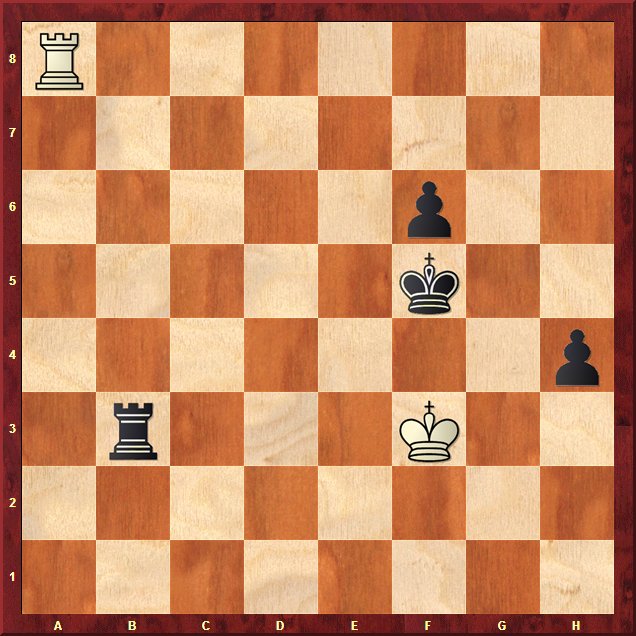 The main defending idea in this type of endgame is to block the h-pawn (thus 64.Kg2 was the only way), preventing Black to send your king on the dangerous first rank…

As it would be beyond the scope of this article to point out all the errors from both sides, and to properly explain a difficult endgame, we would recommend our readers to take their time and study it carefully. This mere half a point moved back and forth from one player to the other, which makes this game, and particularly the final phase,  a great material to learn chess! 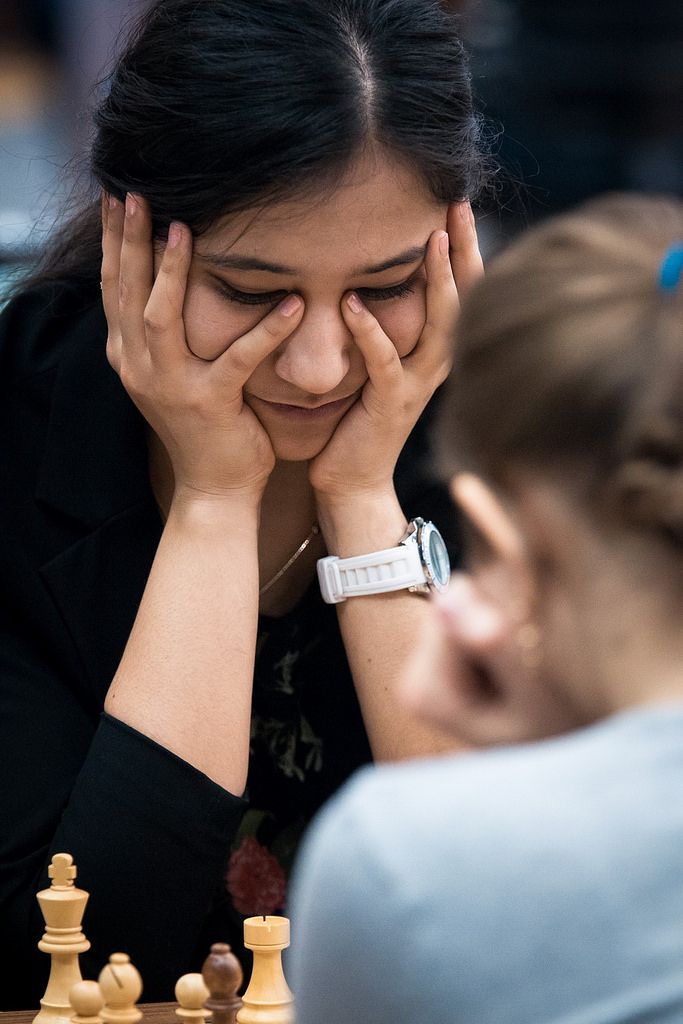 It was remarkable the work Nafisa put in defending a tough position, she truly fought like a lioness, but in the end, her technique lacked precision and allowed Muzychuk to claim the point.

Very interesting choice from Antoaneta today! In the third game as White out of four games, she decided it was time for some more topical theoretical discussions. So for once she left the improvisation aside and went for the 4.Qc2 Slav. Maybe the unfortunate loss of yesterday, when she was Black against Zhao Xue, inspired her to try out a similar weapon. True, Zhao played 4.Qb3, but this is tightly related to 4.Qc2, as Black usually takes on c4 anyway, leading to similar (or many times identical) structures. 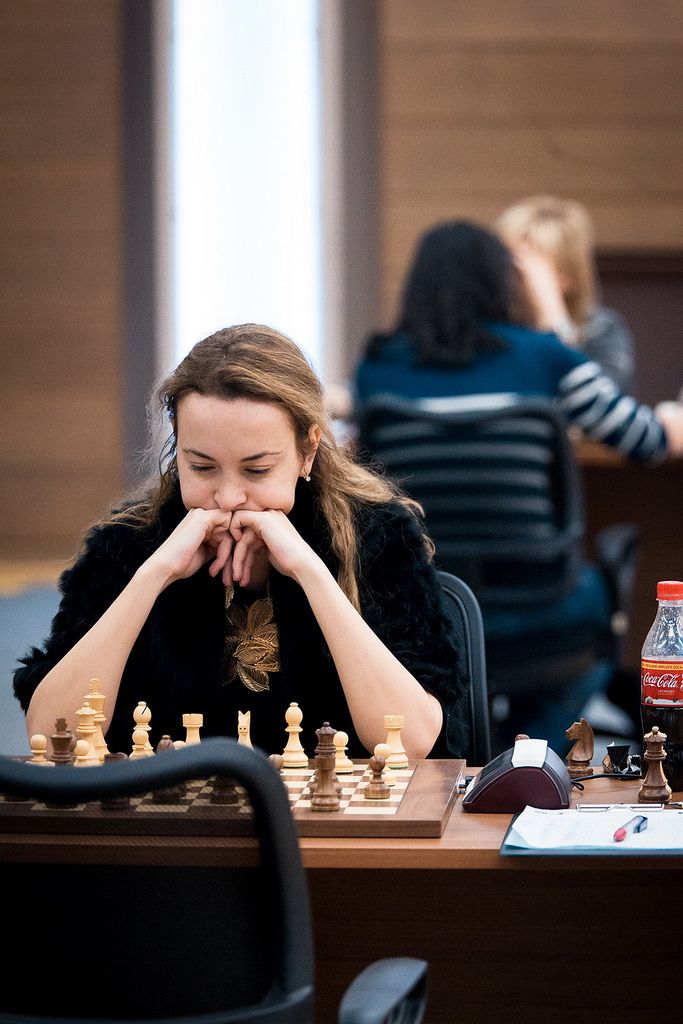 Not being familiar with the new opening approach, Stefanova put her clock on fire and soon she had to perform under time pressure. As Black kept on delivering problems, Stefanova went the wrong way, played the too ambitious g4, and then the strategical error: 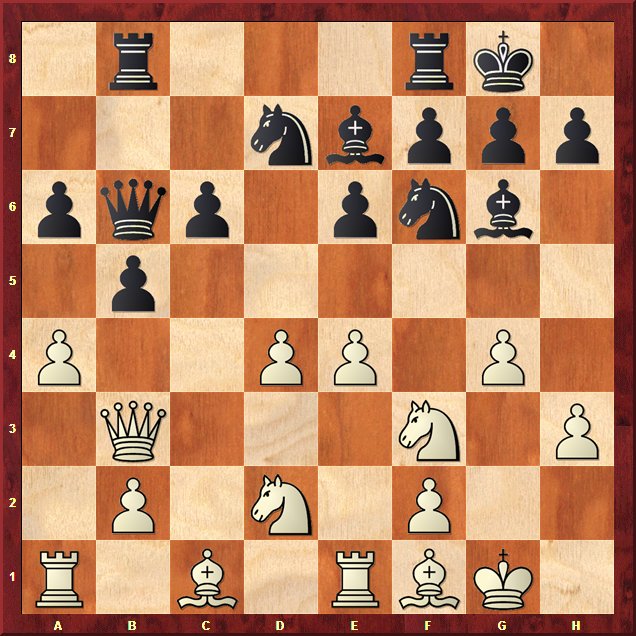 17.Ne5?!, allowing Black to double her pawns, to open up the f-file, hitting on the f2-weak pawn…soon one of the little eight solders was captured, then another and it was simply a miracle that Antoaneta survived!
The lack of precision in Olga’s play, who missed again a great winning opportunity, was the main factor which, combined with tiredness and time pressure, emerged into only half a point.

Stefanova: “I played bad, one worse move after another…but I guess I was the lucky one today. Four consecutive long games is a bit too much, happy with a free day tomorrow!”.

In the less theoretical line of today’s Nimzo with 4.e3 b6, Ushenina handed in a full pawn to the Chinese, getting in return better piece coordination, space and ideas for attack.

Zhao Xue missed a good opportunity to balance the game with an unbalanced continuation: a queen sacrifice! 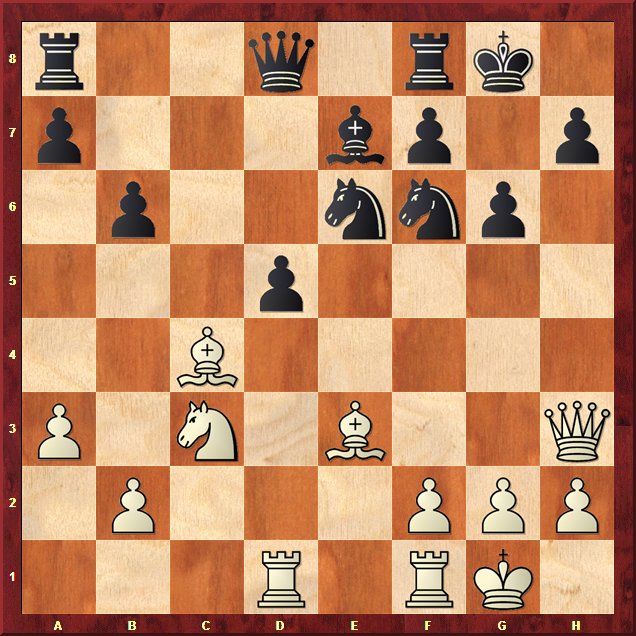 She could have played 17…dxc4 inviting White to take 18.Rxd8 Rfxd8 19.Qf3 Rac8 with unclear play but certainly Black has compensation for returning the sacrifice. 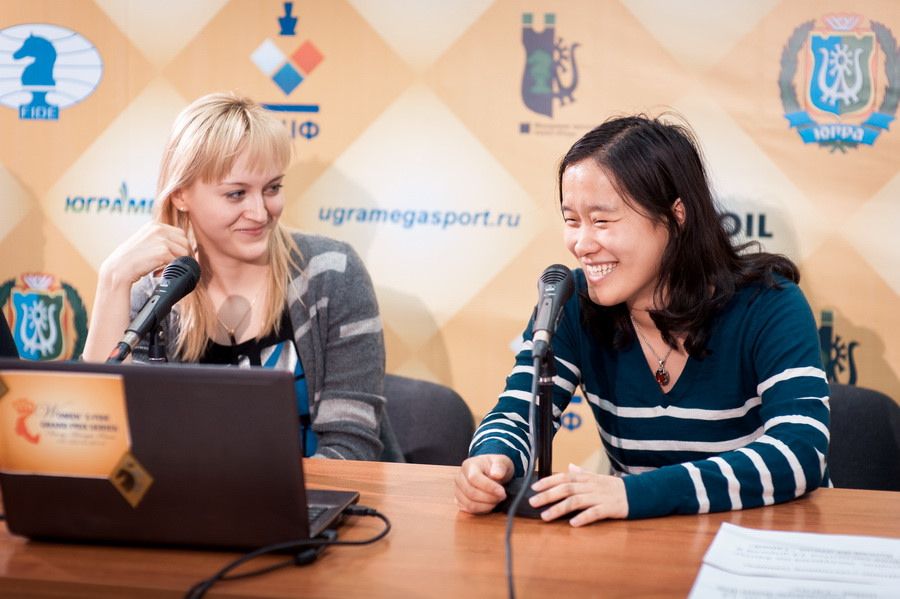 Zhao chose to cling on by her fingertips, defending the extra but rather weak d5 pawn, giving thus the initiative to the Ukrainian, who failed along the way to increase the pressure with trickier moves “but once I will get in my room, with the computer on, I will surely find them”.

Free day tomorrow for everyone, but stay tuned, as the ladies will come back in fresh and with fully charged batteries!

One thought on “Between agony and ecstasy”