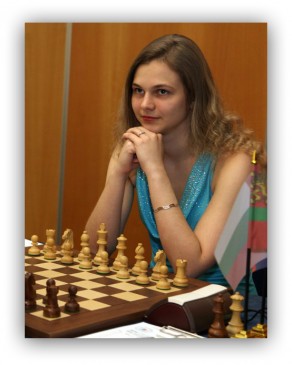 When toddlers are, generally speaking, just learning to talk and walk, the few precocious ones manage to wow the audience by finding more challenging tasks. It was the case of young Anna, a two year old child, who took up chess before she could even say “zugzwang”.
She progressed smoothly ever since and went on to prove her talent by crowning her junior career with two gold medals in the World Championships U16 (2005) and U20 (2010).
Anna’s track record couldn’t have passed unnoticed: starting with 2004, she was invited to play on the 1st board for the Slovenian team, therefore giving some hopes to the other countries that maybe they could put up a fight against the redoubtable cavalry from Ukraine.
But her rise didn’t stop there and the vast array of medals and titles speak for themselves. In July 2012 Anna crossed the 2600 mark, undoubtedly proving she is capable of shoulder to shoulder combat against top GMs, when she took part in the ACP Golden Classic (2012).

The secret key to success is within everyone’s reach, as long as one could be as disciplined as the Slovenian GM: Anna is a hard worker, dedicating 6-8 hours a day to the royal game; in moments of doubt, her sister’s support, Mariya (IM), comes in handy, the two motivating and helping each other to climb the highest heights of success in the passion they both share: chess.
A big fan of Kasparov, who’s games “influenced me most”, Anna displays the same fearless, attacking chess without forgetting prophylaxis. 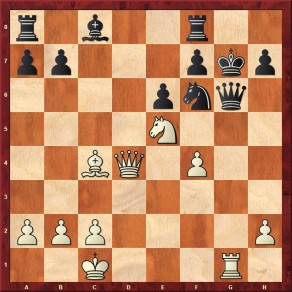 In a position where many players would blindly take the queen, Anna played the quiet but strong:
18. h4! Just improving, Black is left without any hope;
18… Kh8 time has come to collect: 19. Nxg6+ fxg6 20. h5! 1-0 – the point of Anna’s 18th move; a keen eye for tactics, an excellent fighter and a versatile player too!

One thought on “Anna Muzychuk”