After the rest day, the podium remains unaltered: Hou Yifan cruises to another win against Nafisa Muminova, running with a full point away from Anna Muzychuk. The Slovenian GM drew Antoaneta Stefanova, being on the second place unshared with 3.5 points.

Third comes Zhao Xue with three points after her draw against Alexandra Kosteniuk. Just half a point behind follows the platoon with 2.5/5: Kateryna Lagno, Antoaneta Stefanova, Alexandra Kosteniuk, Olga Girya, Anna Ushenina and Nana Dzagnidze, who climbed her way up to 50%, after receiving a present from Batchimeg Tuvshintugs in a cliff-hanging queen endgame.

On two points is the Russian GM, Tatiana Kosintseva, who didn’t break the Ukrainian defense (Kateryna Lagno), followed by Nafisa Muminova on 1.5 and Batchimeg Tuvshintugs with 0.5, who strikes a bad patch. 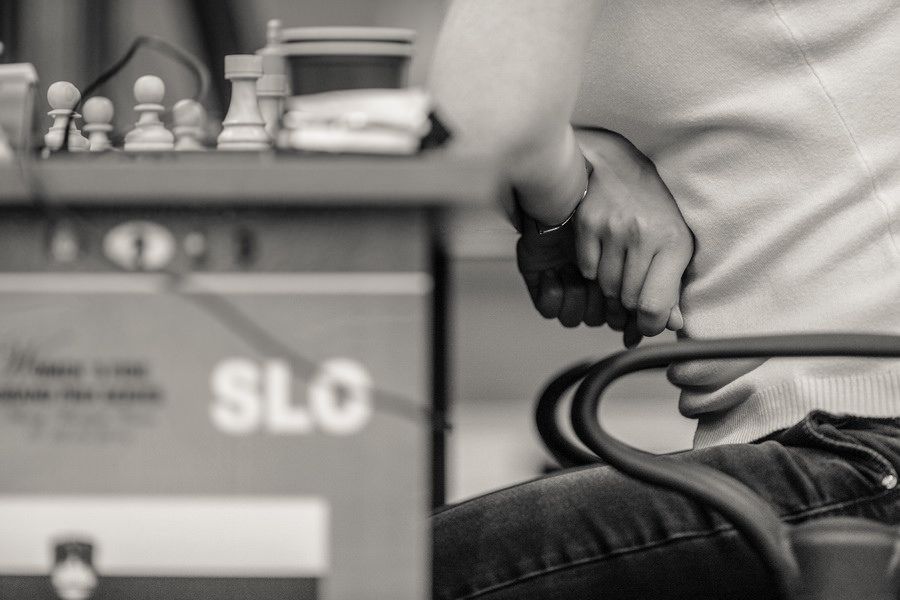 The fifth round saw a relatively high drawing rate: four out of six, although it should have been five… The same as in round three, all the Russian players drew, not before all the possibilities had been exhausted. The apparently peaceful results right after the free day, may suggest that by having relaxed a bit the players increased their accuracy in all phases of the game, including defense. 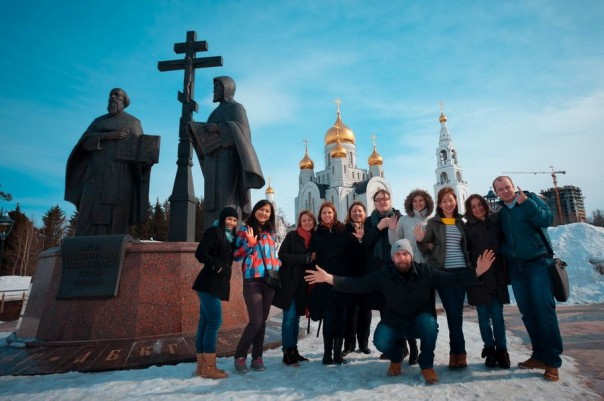 The players and media alike enjoying the rest day!

After four long and hard fought games, Stefanova thought it was about time to spare her energy and finished first today, drawing against Muzychuk with Black. Although at first glance it looked like a game completely lacking fireworks, you will be surprised by the inventiveness the Bulgarian always keeps in her pockets. 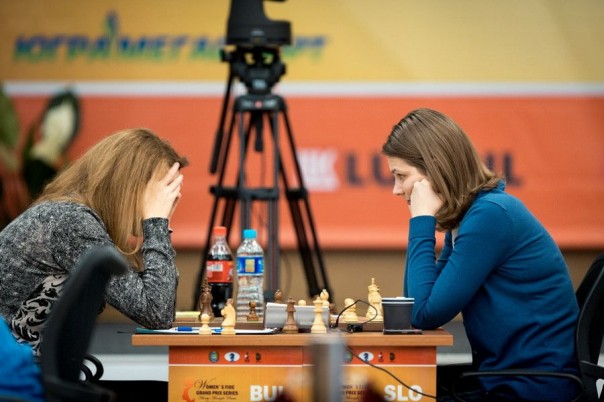 Today she chose a rather unorthodox way to play the Scotch, with 4…Bb4+, which worked perfectly well for her. Black equalized quickly, much to the despair of Muzychuk, who surely had hoped for more as White. Further on, it could have been a total war zone, after the eccentric but very strong rook maneuver via… 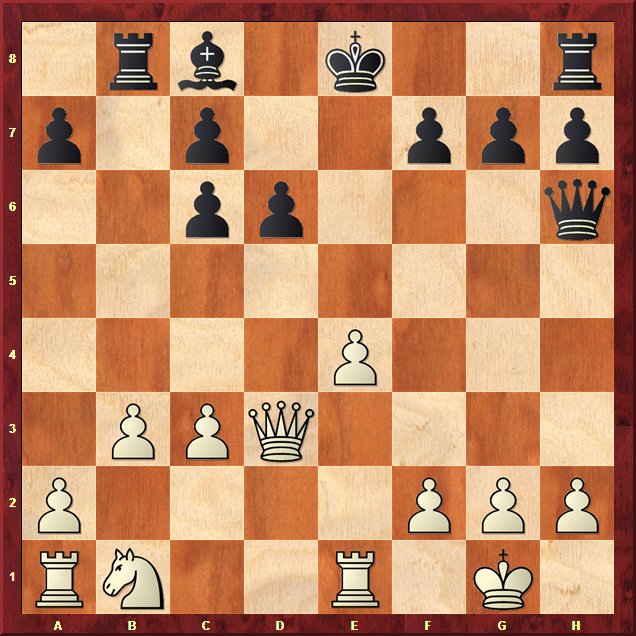 …b8-b5-h5, looking forward to blow the position with g5, g4… Stefanova said at the press conference. “I was happy with my opening… I think 11.Qg3 was a mistake, where after 11…Qh6 it becomes more difficult for White to develop; furthermore, as I was discussing with Anna, maybe I shouldn’t have taken the bishop with 15…Nd3″

Although Antoaneta has a born talent to complicate matters even in what would look like very dull positions, after the safe 18.Nf1, killing any attacking idea, and followed by the queens’ exchange, the game ended up in a rook endgame. The logical and expected result: a draw by repetition.

Shall we be surprised that Hou Yifan played another model game in the Catalan, winning her fourth game already? Noteworthy is the first move 1.c4, which she copy-pasted after her first round win against Kosintseva, which clearly becomes more than an one-time experiment. 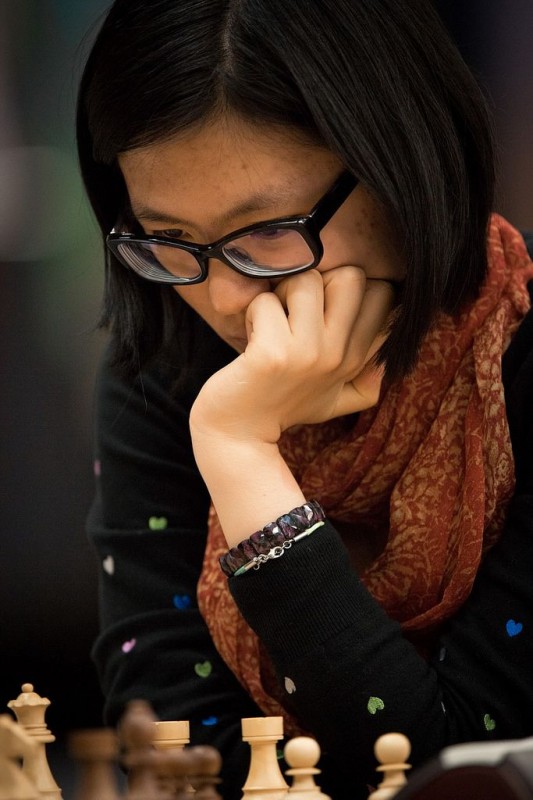 Hou Yifan cruises to another win, consolidating her sole lead, by restoring the advance of a full point over the second place.

The Chinese mastered the new opening and middle game almost perfectly, thus proving that she had thrown another lethal rifle in her weaponry. She sacrificed a pawn early in the opening, gained an advance in development and gradually took over the control of the whole board. In the final phase, the doubled rooks on the seventh rank completely paralyzed her opponent: 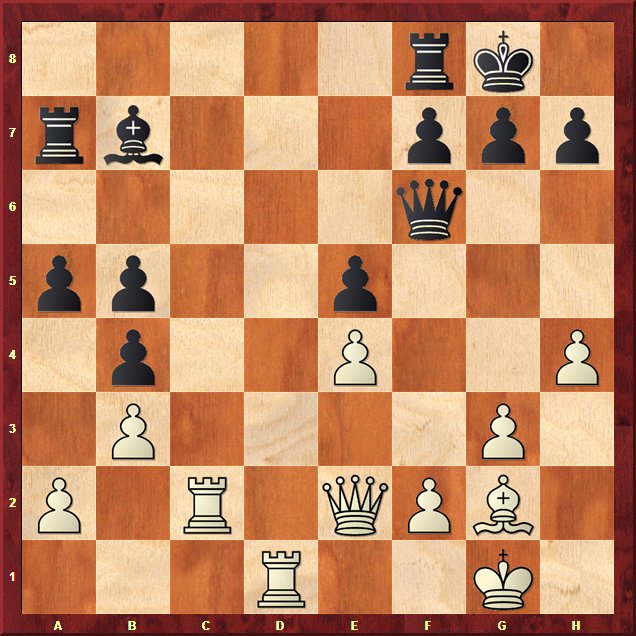 26.Rc7! came and after 26…Qb6 the second one from the army joined its sibling:  27.Rd7 - it became impossible for Black to untangle and White’s strategy culminated with the simple but nevertheless elegant Queen sacrifice 31.Qxf8+! Facing inevitable mate, Muminova had to sign the scoresheet below a zero. 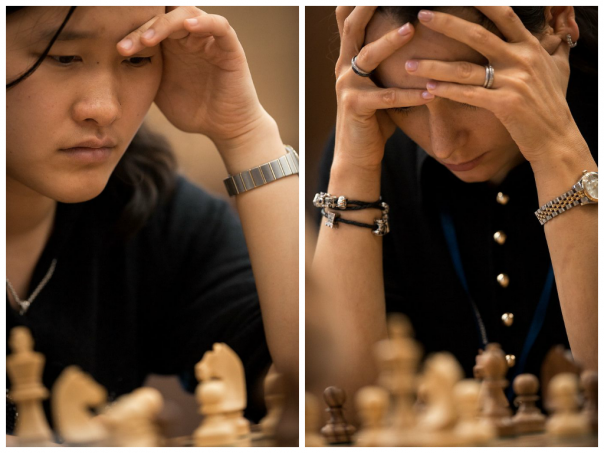 In China against Russia today, the game started fresh, as early as move 4. “After that, I was out there on my own and had to burn a lot of time”, Alexandra shared during the press conference. Zhao Xue continued in a very original manner, but perhaps a bit too slow for claiming an advantage. The plan: 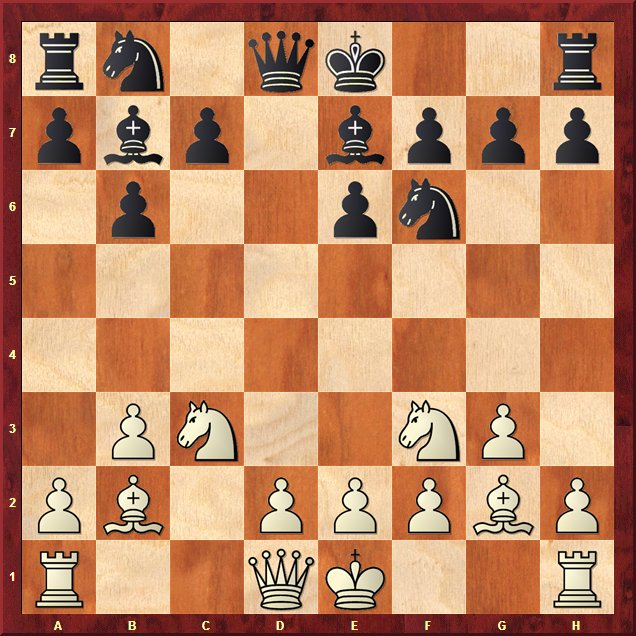 9. b4, followed 10.b5 is typical for these positions but , perhaps, in this particular case better would have been to try for d4 and e4, aiming for more.

Kosteniuk reacted well and neutralized all the threats. After 34 moves and 3.5 hours of play, the strategical battle ended in the correct: draw. As a coincidence, the last move of the game was a back rank queen check, the same as in her compatriot’s game, Hou Yifan.

If in the previous rounds Girya’s technique didn’t deliver the expected results, in today’s game against Ushenina she turned the tables around by saving a difficult position. 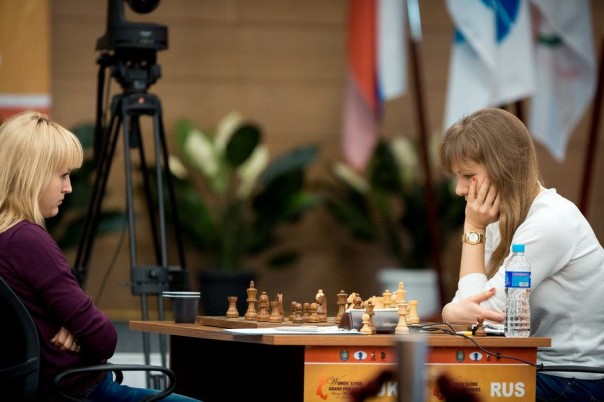 Olga Girya fighting her way back in a difficult position

The new trend in Cambridge Springs used by Ushenina today worked wonders, especially after the little help from her opponent, which started with the less fortunate: 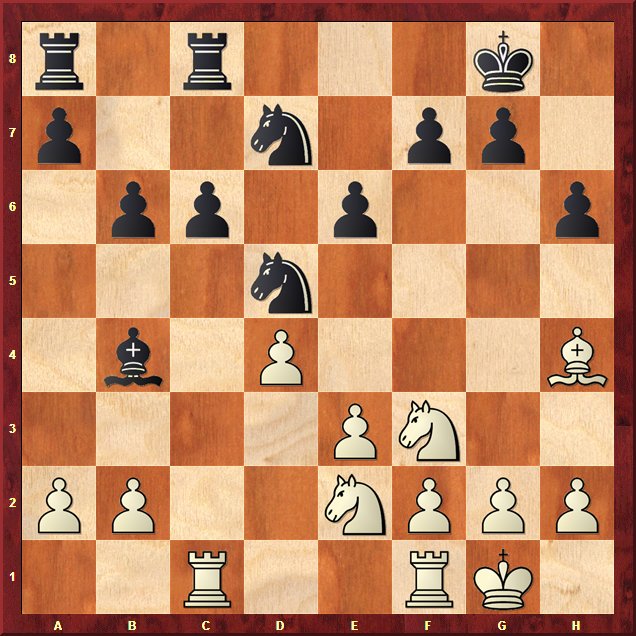 16.a3. The game followed the latest fashion of the Cambridge Springs, all the way until move 16, where Delchev played against Danielian 16.Rfd1. Olga chose instead to chase the bishop away with 16.a3, forcing Black to retreat to a better position and make room for the c5 break. Ushenina took her chance and played a model game up to some point, forcing a chronic weakness on the b3-pawn. 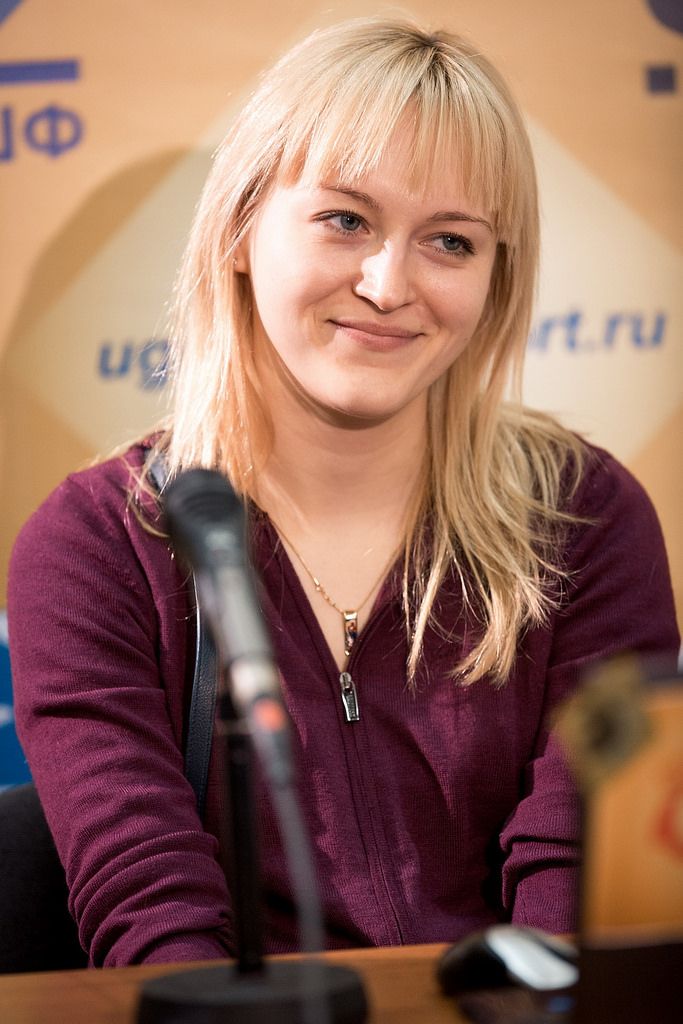 But the clock was ticking mercilessly and the Ukrainian didn’t find the most precise way to convert the advantage, having to go content herself with bringing home only a draw. 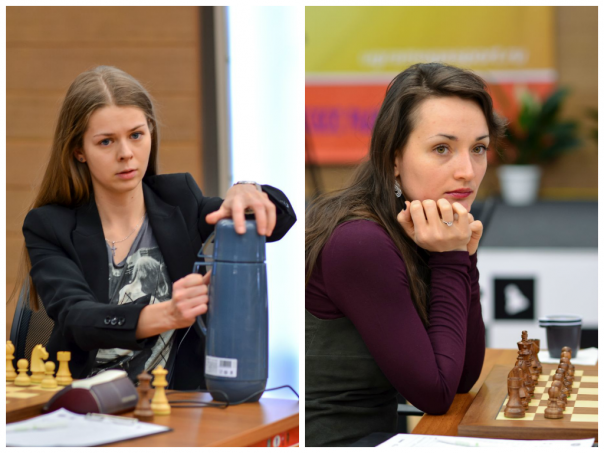 In one of the most interesting games of today’s round: Kosintseva vs Lagno, White met the Najdorf with Fischer’s old favourite 6.h3, which seems to enjoy a marked popularity lately. On move eight she deviated from the usual 8.g4 in favour of 8.Ng3 planning to fight for the d5-square without weakening the kingside. A shoulder to shoulder combat started, where White tried to prove the d5 square is a chronic weakness, crowning her strategy with a positional pawn sacrifice precisely on the same quadrate. 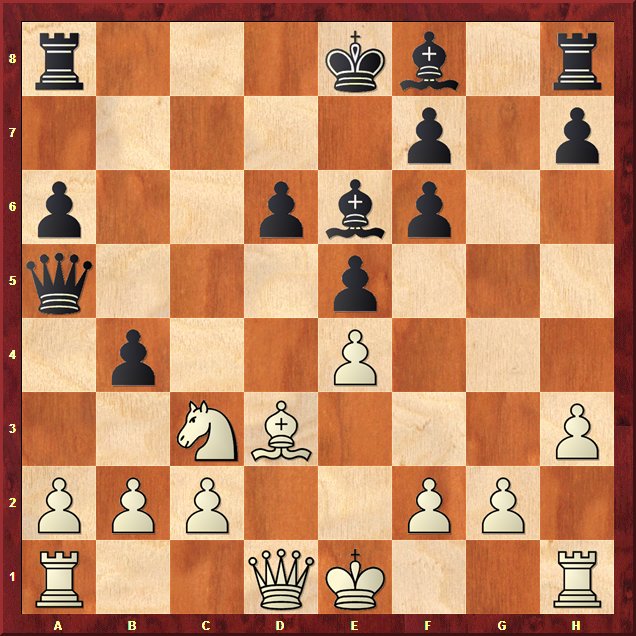 But the Ukrainian didn’t let her guard down, she took the offer, pulled-back White’s compensation on the light squares and directed the game into a dead drawn opposite colour bishops endgame. 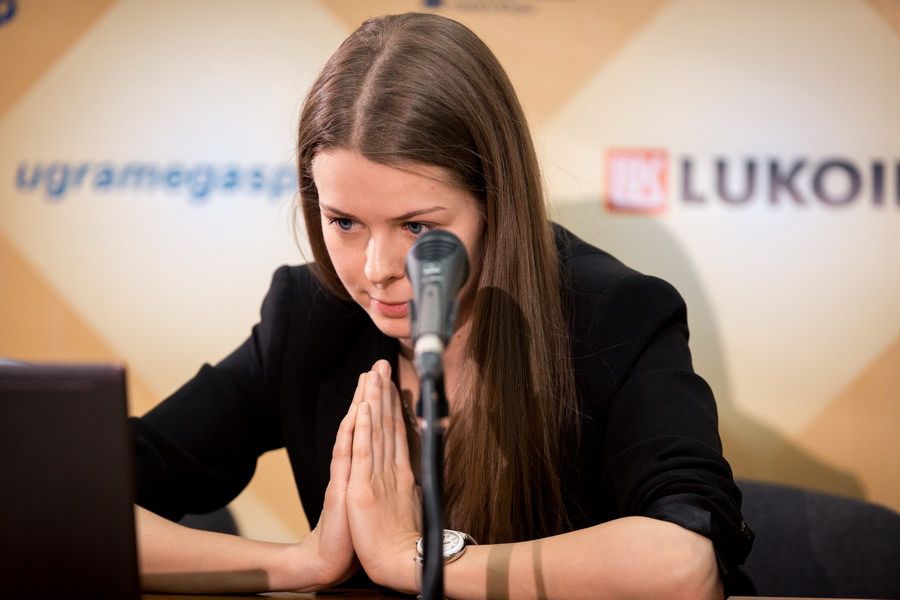 Kosintseva during the press conference: ”the game was too complicated to make a clear remark that it was better here or there…we just fought well”, to which Lagno agreed and we also subscribed. 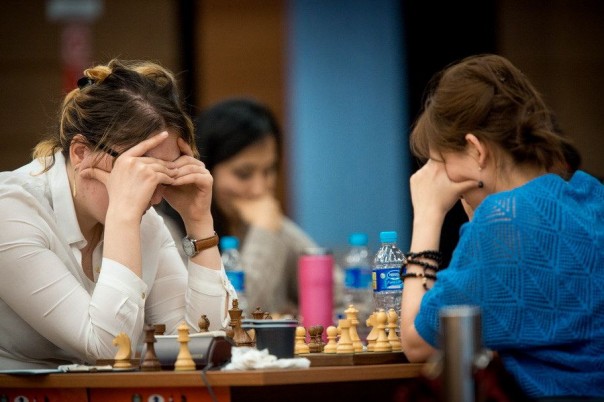 Luck is not on the Mongolian side so far

In the game between Tuvshintugs – Dzagnidze, Black treated the opening, a Queen’s Indian Petrosian system (a2-a3) very provocatively, completely refraining from the fight for the center. 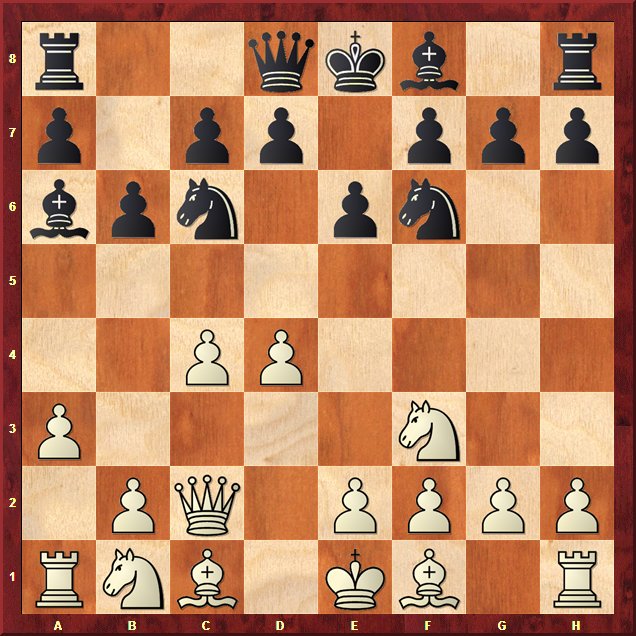 Black usually hits on c4 with either 6…Na5 or 6…b5. Dzagnidze’s provocative 6…d6, refraining from any ambitions in the center, surely looks like a risky experiment. Nana probably wanted to attract her opponent into slow maneuvering play and, why not, into time trouble.

Both players spend lots of time even before move 10 and somewhere after move 15, White started losing control. Dzagnidze won a pawn after an unclear tactical phase but failed to convert it into a winning advantage due to Tuvshintug’s stubborn defense. 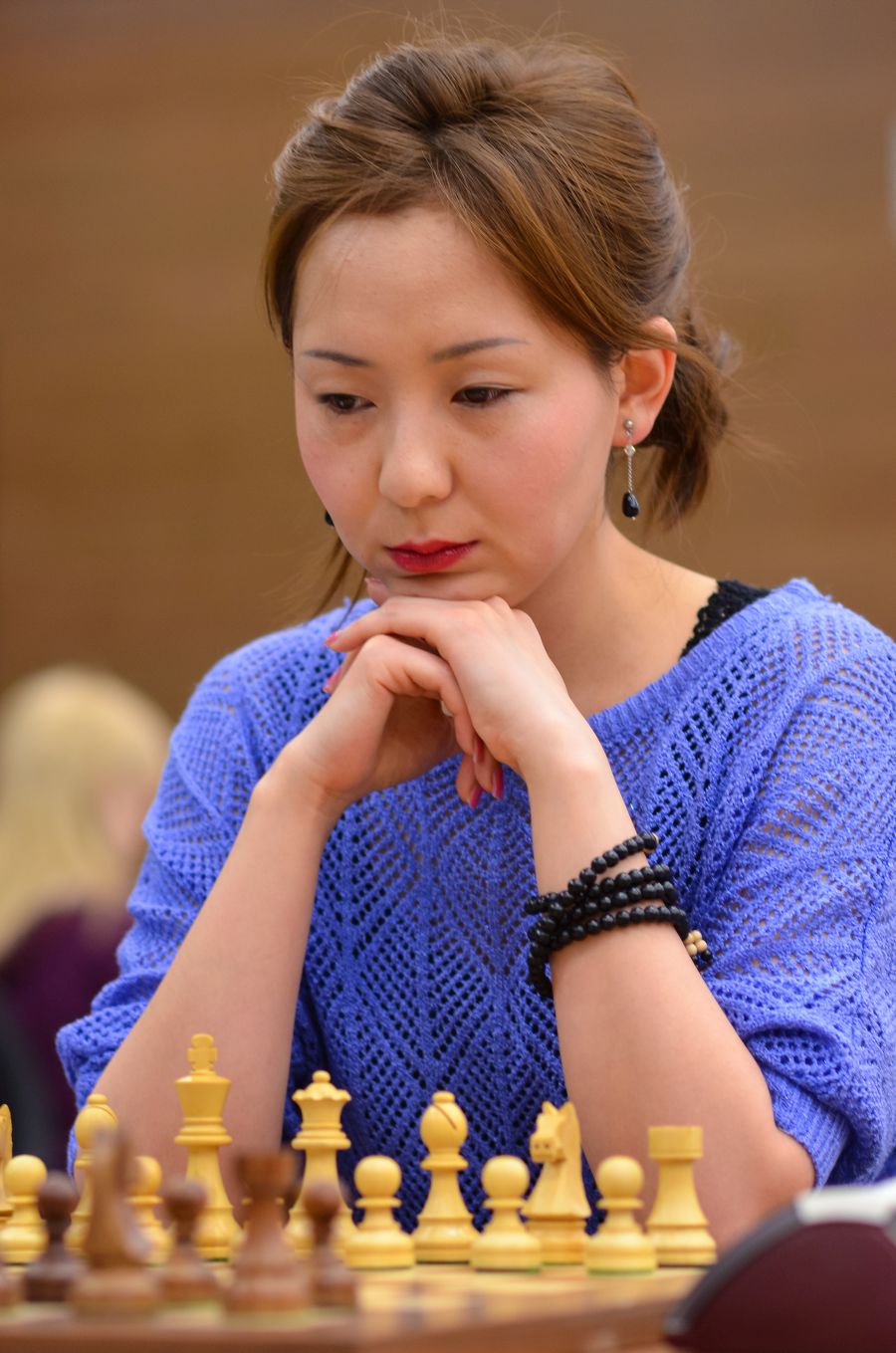 A long discussion in a queen endgame followed, which seemed to be treated well by Tuvshintugs…but, after a long day of pressure applied by the Georgian GM, the tragedy happened: 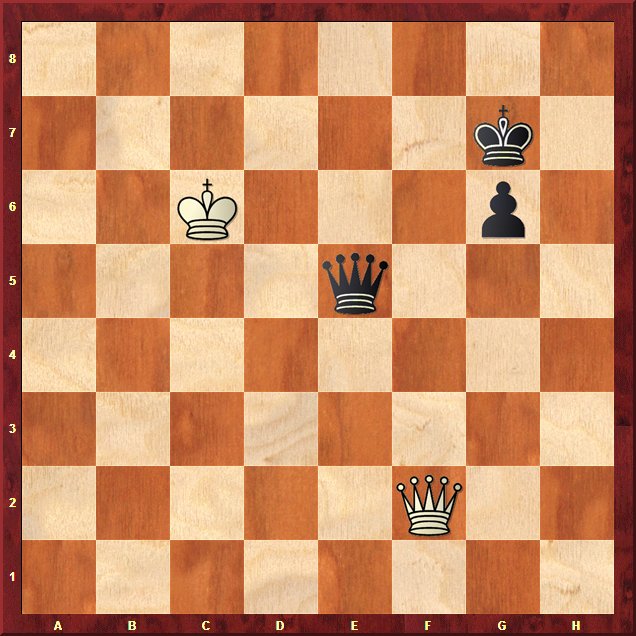 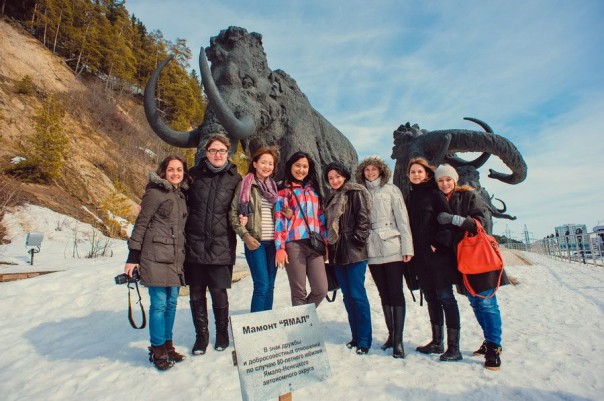 Only an apparently restful day after the rest day!

One thought on “An apparently pacific 5th round”