Which could have been the odds for a 6-0 in White’s favour, as early as round one? Quite low, some might say, but practice has shown that everything is possible. As surreal as it sounds, after several hours of playing, we all believed this will actually happen and yet, this was wrong again!

Right when we were about to call it a “perfectly Black day for Black”, the unexpected happened as in one game the dark colour miraculously saved the honour in a cliff-hanging escape.

The Bulgarian GM remained true to her original playing style and chose for a rather unorthodox move order with White: as early as move 5 and 6, h4 and g4 were played! Stefanova stirred up early complications and this soon paid dividends. After a few small inaccuracies Black so herself forced to enter a worse endgame.

But on the 23rd move, Antoaneta let her opponent come back in the game, by playing: 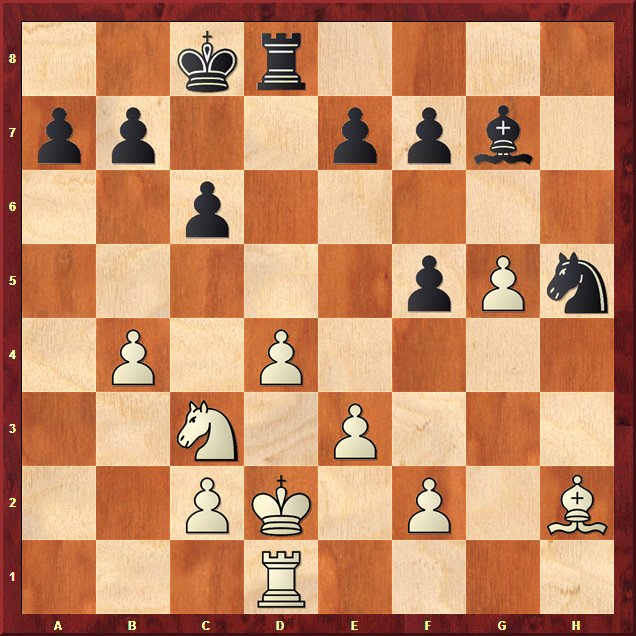 23.Ra1, allowing the 23…e5 blow in the center and for Black to more or less equalize. Had the Bulgarian chose to place her rook on the other square available: 23.Rh1 (preventing the e5 idea, which doesn’t work anymore due to 24.Bxe5! and the knight on h5 feels lonely…), would have kept the pressure; line which she also mentioned during the press conference, Anotoaneta expressing her regret for not chosing the h1 square.

Having played the strong 23…e5! many thought Kosteniuk was close to equalize and bring home half a point but in the subsequent time trouble things fell Stefanova’s way.

Time had come to collect and yet, the Bulgarian erred with the natural: 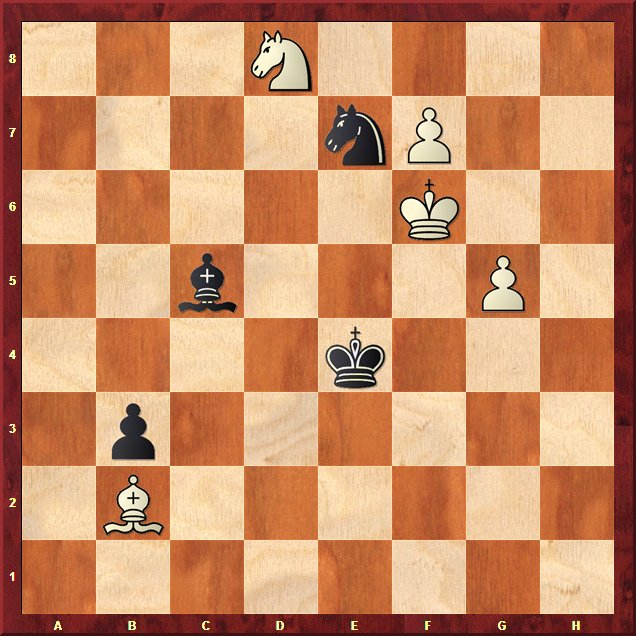 61…Nf4? going back gain into a lot position…

Time trouble though has an important word to say and Antoaneta was no exception today; the last and decisive mistake occurred later on on move 64, when she gave the unfortunate check: 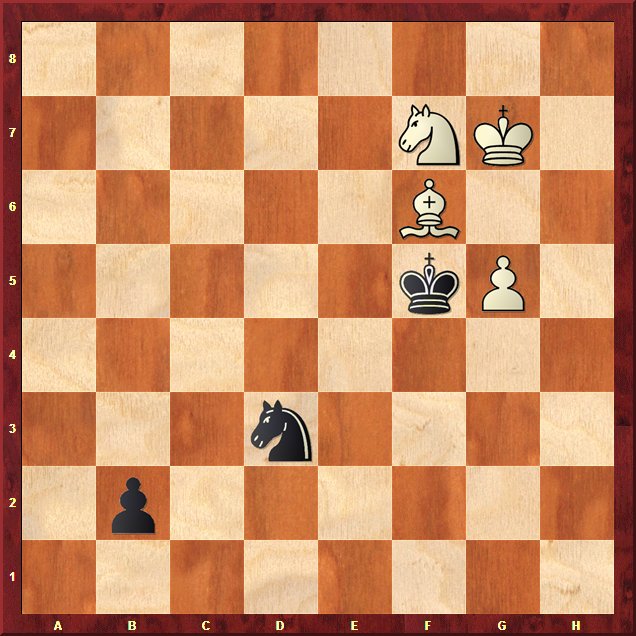 64.Nh6+? (the g5 pawn remains unprotected) instead of taking immediately the b2-pawn, which would have made the big difference from ½ to 1-0…Kosteniuk had no further problems to ‘steal’ half a point from Antoaneta’s pockets: 64…Kf4 followed and 65.Bxb2 was forced 65…Kxg5 and a theoretical draw. 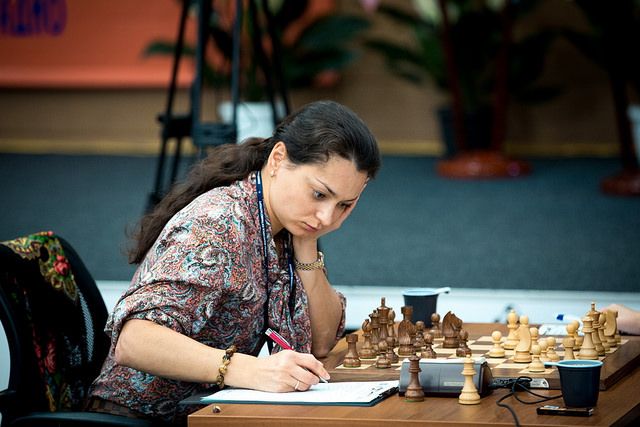 The hero of the day: Alexandra was the only one to hold a draw with Black

It was the first time ever the two players faced each other, which is refreshing on top level chess. The fight soon entered the well known Saemisch discussions from the Nimzo, structures which were greatly employed by Botvinnik, as well as the recent encounter between Carlsen and Anand.

The plans are clear for both sides: who comes first? White in the center and on the king’s side or will it be Black rolling his pawns to a full point in a queen’s side attack? Who comes first brings home the bread…it turned out White was faster, causing Black quite some distress.

In an attempt to release the pressure that White has built, Muminova found the spectacular: 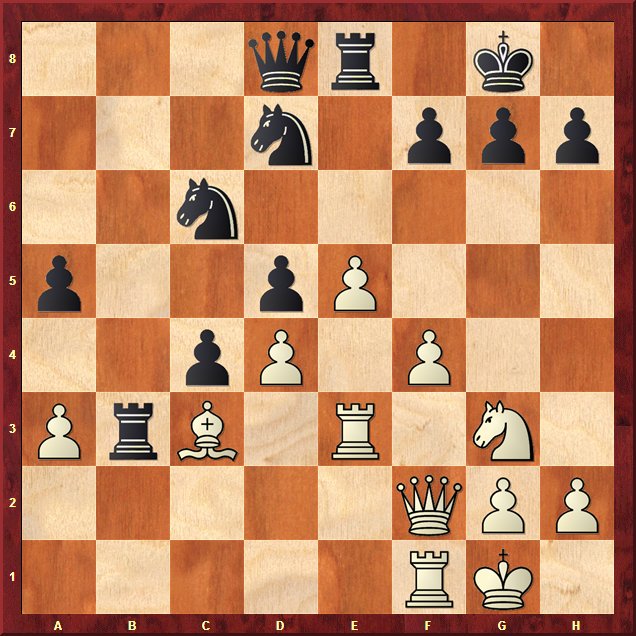 22…Nc5!? However, after calmly taking the piece Black saw herself forced to go into an inferior endgame, leaving Ushenina firmly in the driver’s seat.

Later on, on move 32, the Ukrainian GM exchanged the knights, therefore entering the ‘drawish’ waters of rook endgames…perhaps better would have been to keep the minor pieces in the game, by choosing to play 32.Ne4 for instance and continuing to apply a rather unpleasant pressure in Black’s camp.

But Nafisa returned the favour by grabbing the f4 pawn on the last move before the time control, which gave White new winning ideas: 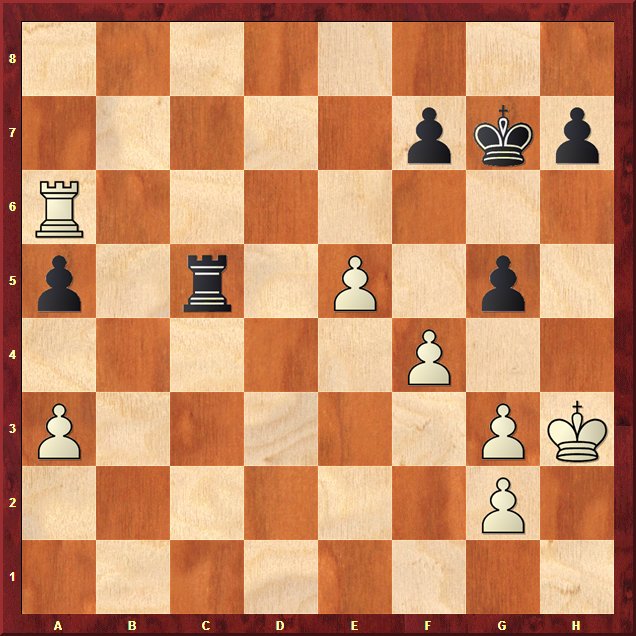 40…gxf4 probably was not the best way to play, from a practical point of view; instead, 40…h5 would have stopped White’s plans to make further progress and to secure the draw. “I thought the endgame should be a draw but it just got worse and worse…” Nafisa said. 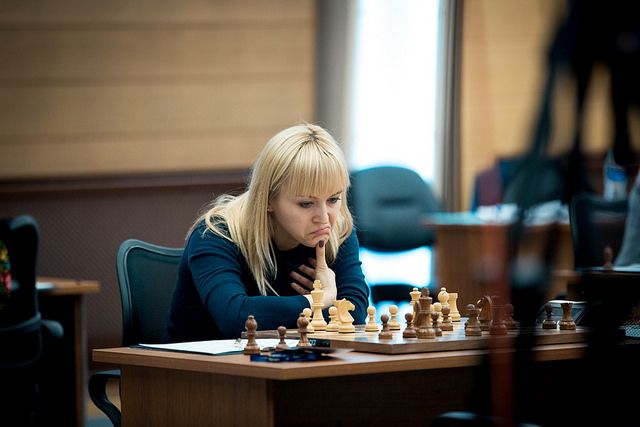 This time Ushenina didn’t throw away the new opportunity and won the endgame with accurate play.

One of the main attractions in Women chess is the rather high rate over the board improvisation, which soon creates room for play by exploring unknown territories. In this particular fight, we could say it was a semi-theoretical battle, or a non typical move order of the English opening, which finally transposed into Grunfeld structures.

In the press conference Zhao Xue said that in her games with Kateryna she rarely get’s an advantage out of the opening so she decided to play something simple. That could have easily backfired had Black continued: 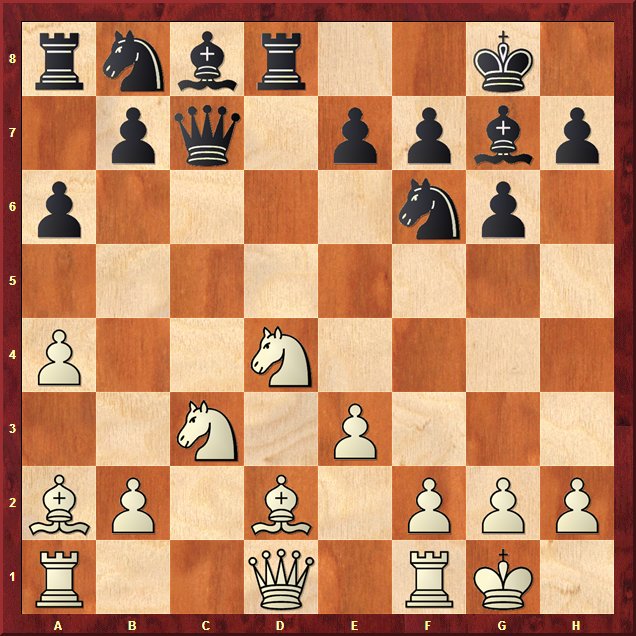 Kateryna played the same idea, though one move too late:

The game soon got critical, following a less fortunate pawn a sacrifice that was boldly refuted by Zhao Xue, who had little problems finishing the game off. 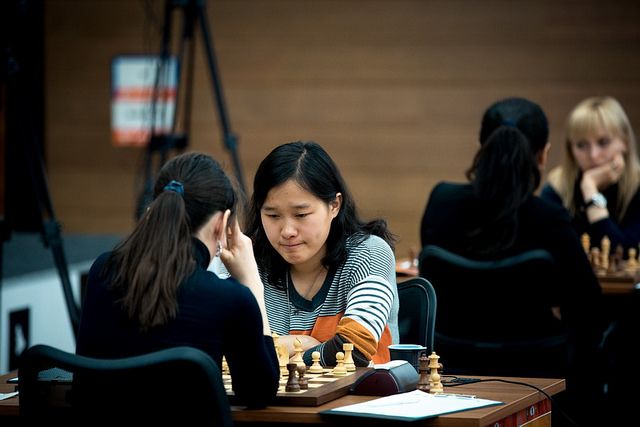 In the press conference Zhao said: “I was lucky, I did nothing special…” to which Lagno disagreed (with a smile), giving thus credits to her opponent.

“There is nothing to comment…e4 was terrible, I missed the only idea White had in this position, Ng5, and after that everything falls apart. White can win in so many different way. For me the game stopped here. Perhaps the 4 months break after the European Team Championship from Warsaw was the reason for me to simply blunder this simple knight jump of Xue”(Lagno).

Certainly a game to watch for the Russian supporters, as Olga was born in the Khanty Mansiysk region. Her today’s opponent was not a very pleasant one, as the Russian talent lost the previous two encounters against Nana, in the Grand Prix-s from Geneva and Dilijan. Olga’s fans surely hoped for a positive twist into their local player’s favour and they were rewarded in the end.

The second Nimzo type of position of today witnessed a rather off the beaten path, when the Georgian GM chose to face the 4.Qc2 Nimzo with 6…b6, which is the old main line. Nowadays the theory follows in Kramnik’s footsteps, by playing the 6…d5 setup.

Later on, Nana shifted again from the well known plans, which include the c5 break, and went for the same idea, employed by Alekseev last year: the setup 10…Re8 and 11…Nf8, to “have a playable game”, idea which “surprised me” (Girya). 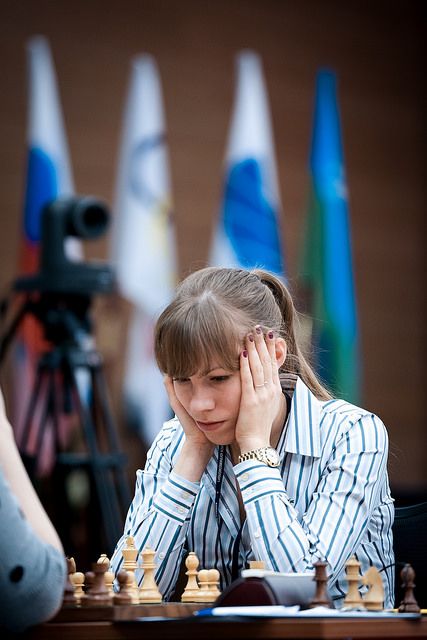 Perhaps Olga didn’t find the most critical approach against Black’s rare setup and after 14.Bd3?! 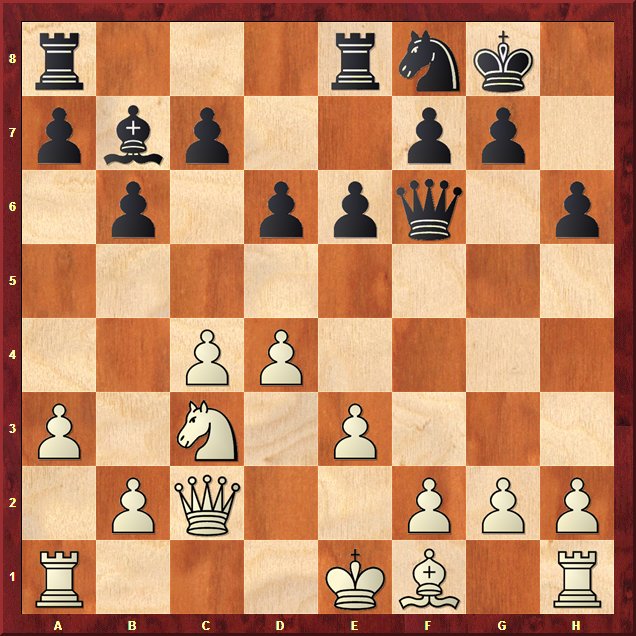 Daring but not clear that White has enough compensation for the sacrificed pawn;

14…Bg2 (Black accepts the offer) 15. Rg1 Bf3 – the g-file gives hopes for White’s attack but this “shouldn’t be enough to prove that the aggressive plan was the right way”, Nana said during the press conference.

But a “crazy time trouble” came and the initial doubtful compensation turned into a killing one and the Russian WGM brought home a full point.

Coming from the Italian setups, the Mongolian WGM went on to play 4…Be7, thus entering the Hungarian Defence, which is known to be a bit passive yet playable for Black; 4…Bc5 is more popular these days. Further on, after White’s 13.c4, the structure acquired an English Opening character. 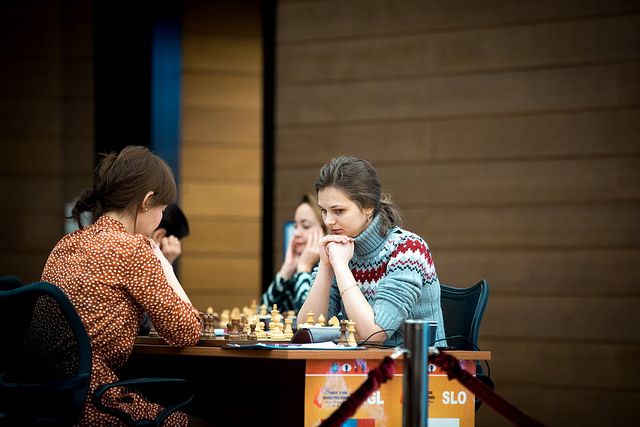 An interesting moment appeared on move eight, when, after 15 minutes of thought, the Slovenian GM played 8. b4 immediately, allowing the bishop exchange on a2, which is in Black’s favour, inviting therefore her opponent to come back in the game. Perhaps stronger was to include 8. Bxe6, disturbing Black’s pawn structure, and afterward to continue with the same plan: b4-b5 push and a preferable position.

On move 41, right after time control, Muzychuk missed an opportunity to finish the game immediately with: 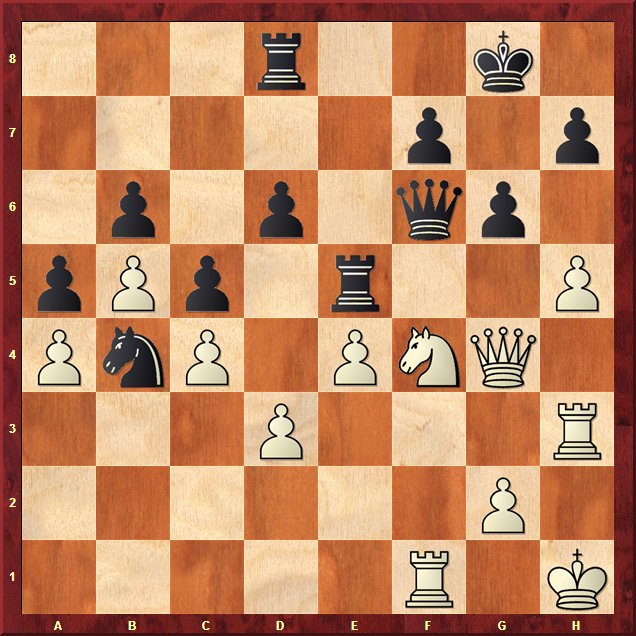 Nevertheless the Slovenian managed to slowly get the better of her opponent who eventually succumbed under the pressure…not without some nail-biting moments though: 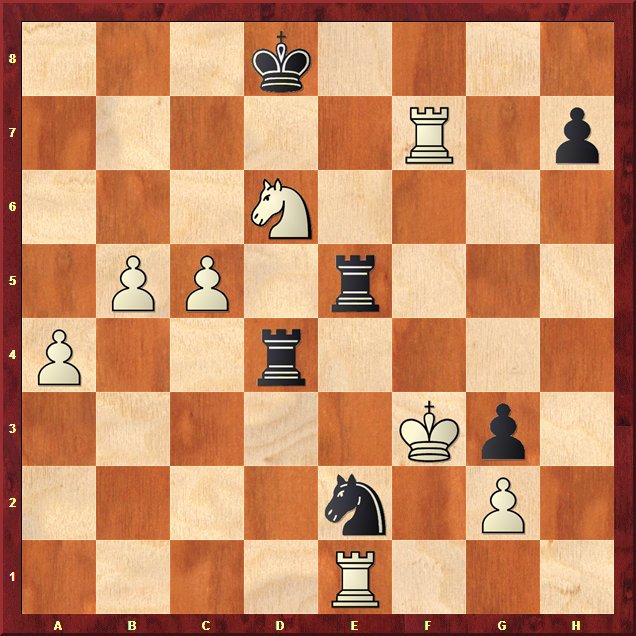 After many hours of play and with only 30 seconds on the clock, the Slovenian player offered a big present to her opponent, who could have drawn on move 75 by perpetual check: 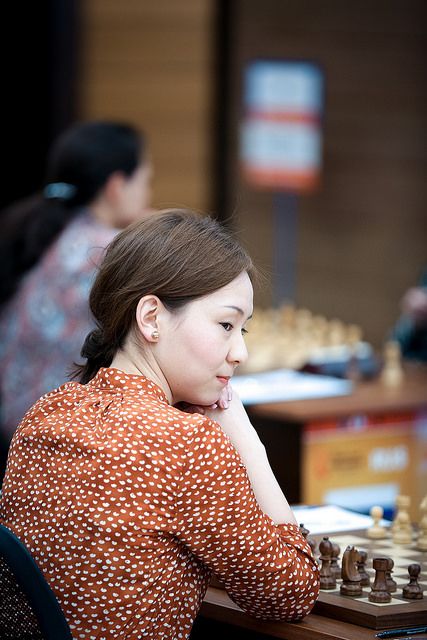 But the favour was not accepted, as Tuvshintugs was perhaps not ready psychologically to realize she could actually escape after a long day of pressure. She took the piece instead:

The game of the reigning woman champion got the attention straight from the very first move! The Mayor of Khanty Mansiysk and President of the Ugra Chess Federation, Vasiliy Filipenko, opened the Women GP’s first round by playing the first move on Hou Yifan’s board. Noteworthy is the little detail which the Mayor shared with us: “I played the first move in the Candidates, on the board of Anand and he went on to win the event. Maybe this little detail will prove to be a talisman for Hou Yifan as well?” And it was, as the reigning woman champion proved her class by defeating the Russian GM. 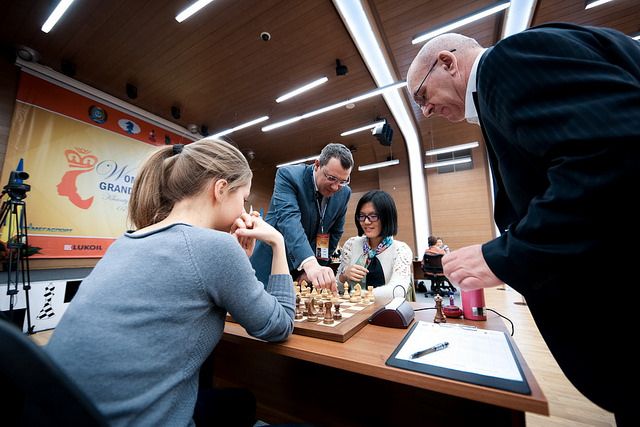 For all the Chinese fans: Yifan played on the first move 1.c4!, weapon which she never used before. Soon the opening faced original play and entered, from an English start, to the Reti opening or we could say to Catalan, but without the pawn on d4.

On move 24 Kosintseva got her chance to get back in the game when Hou played 24.Tb1?! instead of 24.Ra2! Further on, the Russian missed her chance when she didn’t play 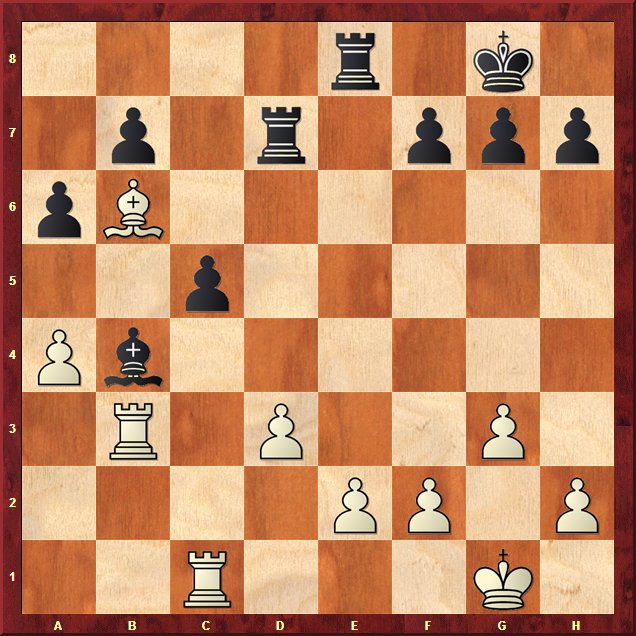 She played 26…h6 giving White the chance to consolidate and slowly improve her position; Hou Yifan won one pawn, then another which eventually proved enough for victory.

Text and analysis by Alina l’Ami